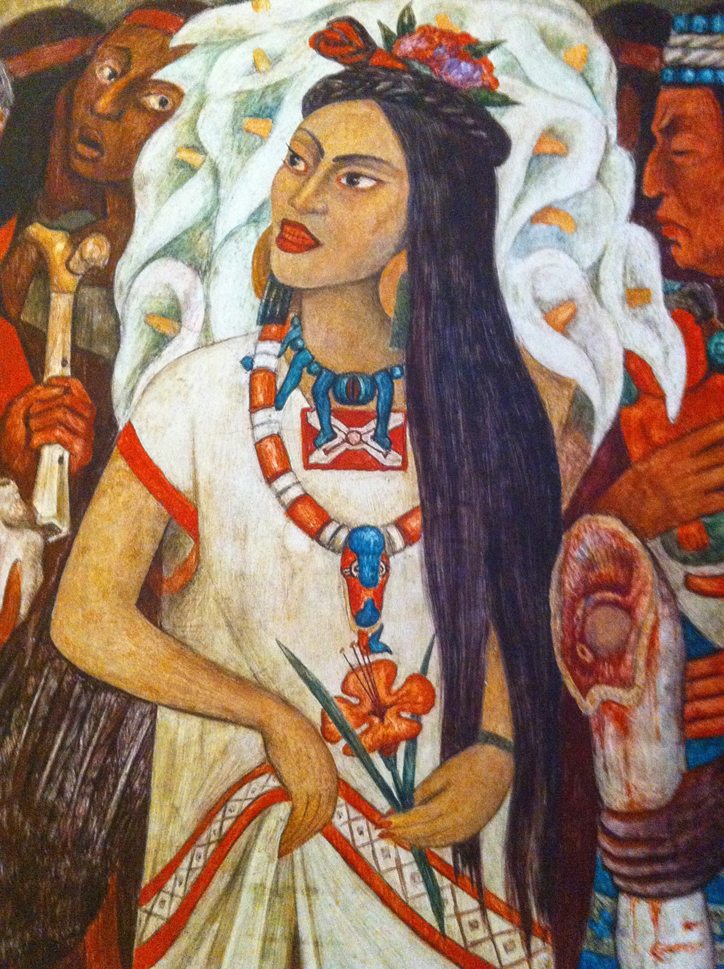 For thousands of years on our earth great cultures rose and fell and were constantly conquered by others. There are still many mysteries surrounding the AZTECS of North America and their significant heritage and it is a culture that is today still widely misunderstood.

We all feel warm towards them when we learn they are the peoples who invented ‘chocolate’ as a ceremonial spicy, frothy beverage from ground Cacao seeds. It was an important luxury commodity, most likely used on ‘fancy’ occasions to elevate social standing.

The glorious, dramatic and ultimately tragic story of the AZTECS and their Empire, which lasted from 1325 – 1521 is accessible in Australia through a truly stunning exhibition. First shown at Melbourne Museum throughout the Australian winter 2014, it is now on show in Sydney at the Australian Museum where it will continue its run until 1 February 2015.

This outstanding show features intricate models and high tech dramatic multimedia presentations. At the heart of the show is a replica of the Great Temple, Huey Teocalli, considered the physical and spiritual centre of the Aztec universe.

In Aztec society there were only two classes; commoners and nobles, and nothing in between.

They were distinguished from each other by behaviour and dress, particularly the style and textiles, indicating status in life.

Anyone could be enslaved or killed if they knowingly broke the code of conduct in matters relating to costume – so we could say like many today, the AZTECS were slaves to fashion and certainly knew they were not allowed to rise above their station in life. 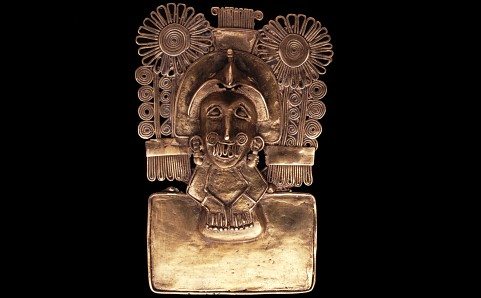 Superbly displayed and laid out, this show aims to change people’s perceptions by telling their real story through a simply stunning array of more than 200 sacred cultural objects.

They were selected by Mexican curator Raúl Barrera, head of the Urban Archaeology Program at  INAH (Institute Nacional de Antropologia e Historia) in Mexico and  Lynette Townsend at Te Papa Tongarewa, Museum of New Zealand, who had the show first.

Many of the objects have been excavated since the 1960’s and have been loaned by museums right across Mexico, which is what we call the area the AZTECS once ruled. They include fabulous golden temple statues, ceramic and stone figures and an impressive warrior dressed in a fabulous eagle costume. The god of metal workers is suitably made of gold.

Interactive aspects of the show help tell a fascinating tale of a civilisation whose daily existence was based, first and foremost, on appeasing the multitude of gods they worshipped. This includes human sacrifice, which can be quite confronting.

Huitzilopochtli the main God was a fearsome figure. He was associated with the bringing of light via the sun, as well as being associated with War. He was at the top of the pyramid of power and of a rigid hierarchy of Gods, which were similarly organized to the society over which they ruled.

The AZTECS had a God for everything. The God of rain Tláloc was responsible for floods and droughts. He was incredibly unpredictable and so much feared. On the other hand Tezcatlipoca took care of everyone’s destiny and it was known he could see and hear all and knew everything. He had quite an impact on everyone’s lives.

To ensure that life continued, people were required to sacrifice their own kind to this enormous quantity of Gods. If they failed to be active in their beliefs they were threatened with the fear of the sun not rising and their world ending, which was a pretty powerful motive to do so.

By the first half of the fifteenth century the AZTECS had emerged as a dominant force in Mesoamerica, with a highly developed system of agriculture; feeding terraced gardens down hillsides using sophisticated engineering to construct irrigation canals and aqueducts. They also adapted their fertile volcanic soil environment, which was teaming with wildlife, to also suit their crops and purposes ruled over by the royals and nobles who controlled the workforce. Merchants risked their lives travelling into nearby lands to trade.

Markets were held daily, selling everything required for daily life including ceramics, cloth and foodstuffs gleaned from hunting, fishing and what became a well organized trade system.

They cleverly worked it in rotation with neighbouring settlements to keep pace with their own civilisations rapid growth.

Aztec warriors were an elite group, a military order made up of nobles and also of lower born men who had proved themselves effective by taking many prisoners.

They conquered 38 provinces, from which they exacted tribute in the way of labour and goods to aid the economy. Local artisans were forced to hand over beautiful craftwork and luxury items, products the nobles most desired for their own use.

Constructing public works such as temples, causeways and defensive barricades was also the work of the commoners, who were expected to give their time to the state.

In battle warriors wore the regalia of other life forms they considered had supernatural powers, like the eagle, which flew high up against the sun.

The tales of the Aztecs still inspire reflection daily in the central motif of the Mexican flag. The Aztec pictogram for Tenochtitlan (now Mexico City) was at the centre of their empire.

The great predator is shown holding a serpent in its talon perched high on top of a prickly pear cactus, which is situated on a rock that rises above a lake. Central emble of the Mexican Flag, the mighty eagle revered by the AZTECS

The city of Teotihuacán predated the Aztec civilisation and they respected its ruins. They had been told by the Gods to build their city where they spotted an eagle eating a serpent.

Eagles were also associated with all the forces represented by male energy and the appear frequently in some shape or form in the wealth of Aztec artefacts.

Just like the sun, which reappeared each morning after having sunk into the underworld overnight, gold which people have been mining and making in a metallurgical tradition dating back to 1500 BC, gave man the power to return to life.

To the AZTECS of North America gold was highly revered, although greenstone and turquoise were prized even more. These semi-precious stones were considered far more exotic and unique and admired for their strength, durability and beauty.

In the show there are some amazing greenstone objects, including a stunning mask inset with obsidian eyes. He predates the Aztec culture and reflects their respect for, and identification with, an ancient local culture.

The AZTECS arrived in the area of ‘Mexico’ during the 14th century following a 200-year odyssey in search of their true homeland.

They called themselves the Mexihcah, or Mexica, the name ‘Aztec’ referring to their legendary ancestral home Aztlán, or ‘the Place of Whiteness’.

After their arrival they lived a tough existence as mercenaries for the Tepanecs, who were the ruling dynasty of that time until they began their rise to power and conquered them in 1325. Suit Armour worn by Pedro de Alvarado a Spanish soldier left in charge by Spanish explorer and commander Hernán Cortés (1485–1547). Alvarado massacred many leading Aztec nobles in the Great Temple, starting the war between the Aztecs and newcomers..

A lot of the existing knowledge about the culture comes from a 16th century Spanish priest Bernardino Sahagun, whose students interviewed people who survived the destruction of Tenochtitlán.

Published in twelve books known as the Florentine Codex, together with artIfacts, other known codexes and research, they reveal different sides of the Aztec civilisation and its culture, as well as the motives and methods behind the Spanish Conquest. Codex Boturini, a pictorial account of the Aztecs journey from Aztlan to Tenochtitlán

A great deal of the information about the people’s and their journey from their previous home Aztian to Tenochtitlán and their overthrowing the Tepanecs to establish their great city is recorded in the Codex Boturini, a pictorial account, which was created on a single long sheet of fig bark, a copy of which is on display.

The Aztecs attitude towards danger from was minimal as they were successful warriors. However in the 16th century they did not know the world outside theirs was rapidly changing.

The political marriage of Queen Isabella and King Ferdinand II in 1492 had reunified Spain and under their rule, the Catholics defeated the Moors at Granada.

Spain’s wealth and power grew as its own territory expanded and the voyages of Christopher Columbus opened up new territories and this was happening just when their own monarchy’s finances were dwindling.

Overseas exploration opened up all new horizons from people who would just move in and take what they wanted, especially the Spanish. And they did.

By the time Spanish explorers arrived in the area in the 16th century, the Valley of Mexico was one of the most densely populated regions on Earth

Aztec warriors were accustomed to victory, although their obsidian blades and shields were made of reeds and no match at all for Spanish steel armour and swords, so they were quickly subdued.

Diseases brought in from Europe unknown to them until that time, including the common cold, killed off many of those who did not die in battle.

The Spanish brought horses with them from across the sea. Previously unknown in the Americas, horses allowed them to cover great distances at speed, and haul heavy loads such as cannons, whose devastating power was overwhelming.

Along with the arrival of Spanish culture the defeat of the AZTECS heralded the beginning of the modern era. It took them two years to defeat the AZTECS, whose culture virtually disappeared off the face of the earth overnight, especially when the conquerors destroyed Tenochtitlán in 1521. Highly organised the Spanish moved into Mexico seeking more gold, new and exciting trade opportunities and to spread the Catholic faith with all the zeal required to ensure the native’s conversion.

International historians, archaeologists and curators drew on primary sources reflecting Aztec and Spanish perspectives, including written accounts from people who lived through the Spanish Conquest to produce this outstanding show. “AZTECS is a once-in-a-lifetime opportunity to really immerse yourself in a civilisation that developed almost in parallel with our own,” said Dr Patrick Greene, CEO of Museum Victoria when it was there.  He also noted that “the Aztecs thrived with a sophisticated economic and cultural ethic that rivaled some of the leading cities of Europe at the time”

AZTECS: Developed by the Museum of New Zealand Te Papa Tongarewa in partnership with the National Council for Culture and the Arts – National Institute of Anthropology and History – Mexico, the Australian Museum and Museum Victoria

Slightly shambolic a scruffy looking Tom Burke and well-turned out Holliday Grainger feature in an easy to like BBC One TV Series STRIKE written by J.K. Rowling