Each artist had their own style and manner of expression, producing powerful works on the home front that were ‘interpreted as metaphors for the stoic resistance of the British people in the face of war’.

Through their expressive paintings and drawings above and below ground Sutherland, Piper and Moore represented the misery and destruction inflicted on British cities during air attacks by the German Luftwaffe in WW II. This fact was realized by the German propagandist Baron Gustav Braun von Stum. He was reported to have said on 24th April 1942 “We shall go out and bomb every building in Britain marked with three stars in the Baedeker Guide.”

For over a century prior to this dreadful decision Baedeker’s travel guides had been the English tourist’s trusted friend abroad.

Their distinctive sturdy limp red cover made of bookbinders cloth was detailed with gilt lettering and resisted the perils of travel.

German publisher Karl Baedeker (1801-1859) started his firm at Koblenz by producing a guide of that town, which would become renowned because of it clarity, attention to detail and pin point accuracy. He had taken over a publishing company and inherited a travel guide he decided to revamp.

His second edition followed the Rhine River from Mainz to Cologne in 1828. It would be the one that would bring forth the system on which he would base his successful series, which brought him both fame and fortune. The first complete edition of what we know now as the ‘Baedeker’ was first published in 1839.

The idea was to give the traveller all the practical information they would need in a handy, easily managed form so that they didn’t have to hire a real guide, one who made his livelihood off the gratitude and employment of tourists.

The first French edition appeared in 1846; the first English edition followed in 1861.

Baedeker guaranteed the reliability of his firm’s publications by making incognito journeys himself and consulting the best sources and experts on every city that he visited.

By World War II in the 20th century Baedeker’s guides had developed a ‘cult’ following in England. They were so famous their name became ‘generic’ and were immortalized in E.M. Forster’s famous 1908 novel Room with a View , later to become a stunning movie.

Baedeker’s were pliable enough to fit into a pocket during the day as the protagonists walked the streets of a foreign city or hiked up a mountain to enjoy a panoramic view. 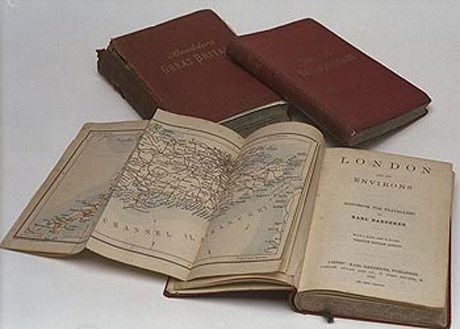 They protected a plethora of information and marvelous maps that opened out easily. Visitors could easily know where they were.

They would then fold the guides back up to fit neatly inside their desirable octavo format (each printed sheet could be folded three times to make a gathering of eight leaves, or 16 pages).

By carrying out the so-called Baedeker Raids on Britain von Stum knew that he would strike at the heart not only of the British Empire but at the heart of the people themselves.

They were renowned for having a keen sense of place and that they were deeply attached to where they lived. He was all about demoralizing them into submission.

Or so he hoped!

What he hadn’t counted on was Winston Churchill leading the British bulldog resilience, or actually how mad the British would be when they finally realised what the Baedeker raids were meant to achieve. 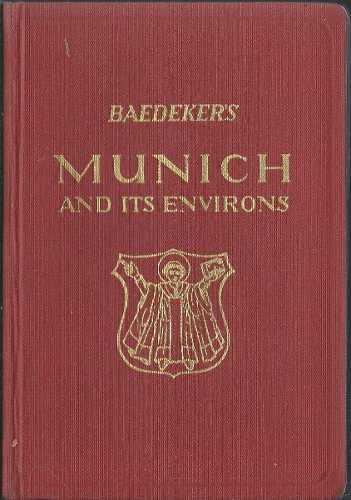 Baedeker guides at the height of their fame were clearly marked with all the special places to visit in a given city, region or place in Europe and England, particularly focusing on cities with buildings of heritage value and merit.

This included Munich, which was later bombed out of existence by British airmen in retaliation for the English Baedeker Luftwaffe raids.

After the war the guides would also play a significant role in helping to restore many bombed out British and German heritage sites.

Graham Sutherland had been injured as a young man during World War I. His work as a war artist produced many memorable pictures that helped him build a stellar reputation. The worst of the London Blitz was centered on the East End, the area entirely devastated. The houses were mostly abandoned and although a few people continued to shelter in the wreckage during a period of social unrest, he didn’t show who they were.

Instead he chose to let the viewer understand the massive loss of life and abiding pathos suggested by the stillness of his moving scenes, which were melancholy in their colouring.

John Piper made a specialty of painting churches and historic buildings, particularly those ruined in two devastating ‘Baedeker raid’ periods between April and June 1942.

For the now renowned Sculptor Henry Moore (1898-1986) however it was different.

After the first World War he had become a talented student of art although his teachers tried to insist on him staying within rules and parameters his eye just did not see.

Travelling on the London Underground one evening during World War II Moore was inspired by the sadness, stillness and sense of hopelessness on the people’s faces as they crowded on the platforms waiting for the bombing above to end.

Each night of the bombing raids he made copious drawings of civilians sheltering in the Underground tunnels.

They were faceless, blindly waiting silently, while sometimes sleeping until forced to re-surface and see just what hand fate had dealt them. After the war Henry Moore would radically explore and re-interpret sculptural form at the cutting edge of changes that would herald the art of the contemporary age.

His bronze sculptures would gain a prominent place in the public arena. Graham Sutherland, John Piper and Henry Moore with art historian Kenneth Clarke (Civilisation) at an exhibition of Henry Moore sculptures after the war

A notable feature of Baedeker’s exceedingly trusty guides during their hey day had been the use of “stars” indicating objects and views of special interest, as well as to designate reliable hotels.

This original ‘ranking’ idea of Baedeker himself would stick, coming down to us from his time as an integral aspect of his legacy; an important aspect of many travel guides, hotels and restaurants of today.

Renowned psychiatrist and writer Iain McGilchrist recently delivered a powerful presentation about the brain as part of the RSA at London’s free public events program. He explains how our ‘divided brain’ has profoundly altered human behaviour, culture and society.  In McGilchrist’s book The Master and his Emissary, he argues that…