At London the Bard will no doubt be braying, bells will be ringing, bunting flapping, flags waving, corks popping and chefs baking, while all the Queen’s horses and all the Queen’s men will be parading before firing their cannon in Hyde park to announce a Diamond Jubilee milestone for the monarchy. On Britain’s Bank Holiday weekend numerous celebrations will mark Queen Elizabeth II’s achievements to date and the local economy will get a giant boost. The Brits alone are expected to spend something like 823 million +pounds over the weekend, let alone visitors. The world media is participating on an unprecedented scale to ensure that people all around the world have a front row seat. You have to hand it to the Brits no one does pageantry with as much style as they do. Then they have had a great deal of practice.

Everyone at London is no doubt praying for fine weather on Sunday 3rd June for The Queen, surrounded by 1000 other boats, will barge under ten of the the twenty-four Bridges that span the mighty River Thames. It could well be the most wide-reaching and joyous spectacles of the royal family we have all been lucky to see in our lifetime. It is all happening as part of the official celebrations. Ten groups of boats will be led by music herald barges. The Queen and the Duke of Edinburgh will be on the royal barge The Spirit of Chartwell, which will be in the third group. All the bridges will close to the public and spectators will need to decide whether to watch from the north bank or the south, just as in medieval times. This was when the only way of crossing, except for London Bridge, was to be ferried over by a waterman. Londoners of those days would have been used to seeing the royal barge being rowed between Richmond, Westminster and the Tower of London. The river was a far quicker thoroughfare than the appallingly congested roads and streets, although the chance of seeing floating bloated rats and cows carcases was very high. Today everything has changed and the river will be sparkling clean. Central among the procession of barges will be Gloriana, the 88 feet long Royal Rowbarge, which has been hand-built for the occasion. Funded appropriately by Lord Sterling, former executive chairman of P & O cruise liners, it is the first such craft to be built in 100 years and took 60 craftsmen four years to complete. Lord Sterling commented to The Independent “I became enamoured with the idea of building something timeless and got inspiration from Italian artist Canaletto’s paintings (of which the Queen has many) that showed the great barges of the 18th century and decided to build one.” He then added: “If we had to give it a style, it would have to be Regency”.

Flat-bottomed hull boats are extremely versatile and old working barges of the 19th century are today converted to pleasure craft to compete in annual races in the Thames estuary. The Prince of Wales was apparently the first to suggest a tribute to the Queen involving the historically famous river, which has, for thousands of years provided humanity with an economic resource, fresh water source and a major highway for international trade. It was the Roman Emperor Claudius in 43 AD who recognized its importance both strategically and economically. He built fortifications to protect citizens, who settled along its fertile banks near a settlement called Londinium, where one bridge was built, with a second constructed upstream at Staines, where rising tides would sweep the boats along. King John also signed The Great Charter of the Liberties of England (Magna Carta) on 19th June 1215 at Runnymede, one of the eighty islands in the River Thames, which also granted he and his Barons the ‘right of navigation’. All ready for the fray

The Tudor Kings of England used the River Thames constantly to reach their palace of Hampton Court, except when the river froze. In 1607 this happened above the London bridge, which has existed in various forms or other on, or near the spot the current bridge occupies. It was in 50 AD that the first bridge of wood was built by the Romans.

During the 18th century the Lord Mayor of London was so concerned about congestion on the bridge of the time he decreed that ‘all carts, coaches and other carriages coming out of Southwark into this City do keep all along the west side of the said bridge: and all carts and coaches going out of the City do keep along the east side of the said bridge.’ Some historians have suggested this might be origin for the practice of traffic in Britain driving on the left.

Street Parties all over Britain will be in full swing all weekend while London will be decked out gloriously with bunting. Thousands of commemorative medals have been produced to mark this Diamond Jubilee.

The Mall will be packed on Monday evening as the Diamond Jubilee Concert takes place outside Buckingham Palace, surrounding the statue of Victory. After it is over some 2000+ beacons will be lit across the country, including on each of the four highest peaks in England, Wales, Scotland and Northern Ireland.

The obligatory appearance by the Royal Family on the balcony will take place following a service at St Paul’s Cathedral when the Queen and her family, having given thanks to God for her glorious reign, will attend a service in her honour.

They will wend their way back to the Palace in her ‘open’ Landau carriage if the weather is dry, so that more people can see the Queen. The Prince of Wales, Duchess of Cornwall, Duke and Duchess of Cambridge and Prince Harry will all accompany her.

Let’s hope the bakers on ‘Pudding Lane’ don’t forget to turn the fires out! 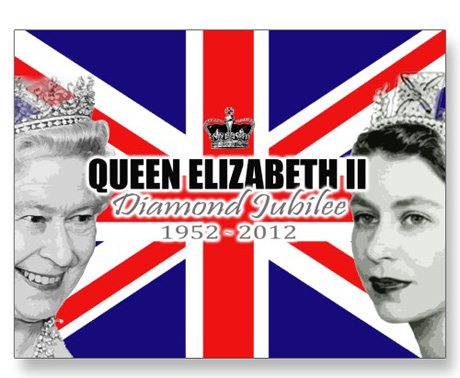 Tuesday, June 5th
10.30am Thanksgiving service at St Paul’s
11.30am The Queen attends a reception at Mansion House hosted by Lord and Mayor of London.
The rest of the Royal family attend a reception at Guildhall, hosted by City of London.
2.20pm Carriage procession down The Mall
3.30pm The Queen, Duke of Edinburgh, Prince Charles and Camilla, Duke and Duchess of Cambridge and Prince Harry appear on the balcony at Buckingham Palace for RAF flypast

I think we all love the Academy Awards, in fact I love award ceremonies! I am always desperate to see who will make best dressed or has the biggest shocker! This week I am sharing my ‘Top Ten’ favourite Oscar Dresses. It was incredibly hard to cull my list, but…