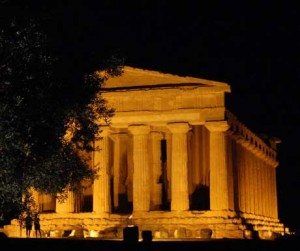 With the conquests of Alexander the Great (356-323) the ancient Greek world expanded, assuming a continental character. Its center of gravity moved east; the capitals of the new Hellenistic kingdom included Alexandria in Egypt, Antioch in Syria and Pergamum in Asia Minor. They became focuses for Greek civilisation. Athens at the time had an area of 1,000 square miles and a population of c300,000. The polis or city-state was made up of both town and country dwellers. All inhabitants of Attica were freeborn. Wherever they lived they were members of the polis or city-state of the Athenians. Citizens (men only) were expected to conform to religious observances and participate in military service. They were also bound to obey the state’s laws, which had sacred authority. At Agrigento (the eye of Sicily) the meticulously calibrated Temple of Concord, with its harmonious proportions, projects the high standard achieved for Greek temple architecture c450BC.