During the past few months at Bendigo Art Gallery they have been celebrating the human form with two exhibitions; one that unashamedly displays the human form in its natural state, The Body Beautiful in Ancient Greece works from the British Museum and Undressed, on loan from the V & A Museum, which examines the evolution of the previously unmentionable, undergarments for over 350 years, after we became obsessed with permanently covering it.

The gallery had given over generous spaces to The Body Beautiful, a stunning show where select three-dimensional sculptural pieces can be viewed from all angles.

The show is about much more than ‘antiquities’, the ancient Greek ideas of liberty were emboldened by a belief in freedom, one sustained by a deep respect for personal honour, and nurtured by a love for action.

This quality was reflected in the harmony, balance, rhythm and proportion of the sculptures on display, especially those portraying the human character.

Curated by Dr Ian Jenkins, Senior Curator, Department of Greece and Rome at The British Museum, The Body Beautiful, explores and celebrates the nature of the European aesthetic ideal.

The superb Parian marble Aphrodidte was all about infusing vitality and life into what it means to be human, by giving form to eternal beauty. Marble statue of a discus thrower (diskobolos), Roman period, 2nd century AD after a lost Greek original of about 450 – 440 BC from the villa of the emperor Hadrian at Tivoli, Italy on show at Bendigo Art Gallery, 2014

The sensational sculpture of the Discobolus, or Discus Thrower offers a view of the dynamic harmony of the human body.

He stands in a small space of his own, so that we are able to walk around him and view him from every angle.

His breathtaking beauty celebrates the skill and eye of the ancient sculptor Myron (working c180 BC to 440 BC) who specialised in rendering the athletic bodies of Greek sportsman.

The ancient Romans ensured Greek sculpture became part of western tradition because they revered and admired it so much they copied it avidly.

This model based on the original carved by Myron c 450 BCE, came from the villa of the Emperor Hadrian at Tivoli in Italy.

Its head is looking forward, rather than back as it is on other models.

He came to Australia, along with more than 100 other works of art that included ten pieces of freestanding sculpture.

Today no one would question the choice of the Discus Thrower’s circular, flat object as a throwing weight. This is because we know about and appreciate the shape’s aerodynamic qualities. Marble statue of a discus thrower (diskobolos), Roman period, 2nd century AD after a lost Greek original of about 450 – 440 BC from the villa of the emperor Hadrian at Tivoli, Italy on show at Bendigo Art Gallery, 2014

The ancient Greeks however did not have that understanding; presumably they realized thin, round water smoothed pebbles found in riverbeds were able to be thrown faster and further than any other.

The discus throwing competition took place at the games held at Olympia in ancient Greece, and there is a huge model of the site as part of the show, which was very informative

The statue of Aphrodite the Goddess of Love, again Roman period 4th century BC from Ostia.

She had been commissioned by the citizens of Knidos in southwest Turkey around 360 BC.

She had survived well to convey to us why she was a popular ‘tourist’ attraction in her own day.

She is inspired by a famous image of her by Greece’s famous sculptor Praxiteles (flourished 370-330 BCE), the most renowned of the 4th century BCE artists.

There is also a small but quite lovely sculpture of Eros, Aphrodite’s son the original by Lysippos, a contemporary of Alexander the Great. He introduced into Greek art as represented in sculpture, a new naturalism,

His sculptures embodied the pursuit of pathos; that inner universe where we remain subject to the mystery of our positive and negative irrational feelings as we celebrate man’s heroic qualities in harmonious proportion. Black figure and red figure decoration on Amphora, on show Bendigo Art Gallery, 2014 from the British Museum at London

The pottery industry was a key factor in the strength of the ancient Greek economy and Greek terracotta vases, drinking cups (Kylix) and storage vessels for wine, olive oil and luxury products like perfume and salves were exported all over the then known world.

Corinth and Athens were major centres of pottery production and their painters drew on an inexhaustible source of Greek myths, Greek humour, Greek theatre and epic tales for subject matter. 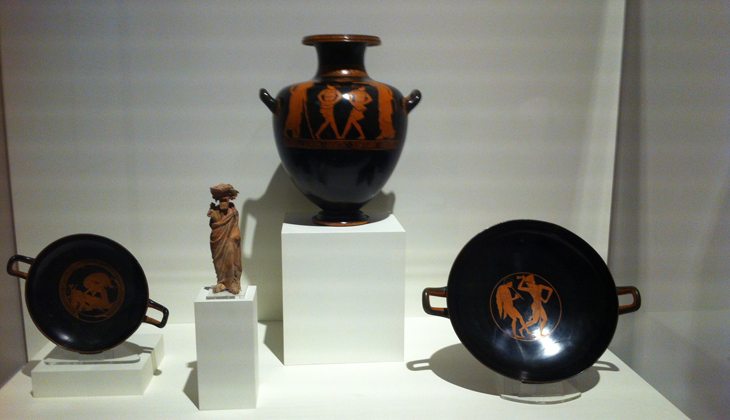 Black figured Amphora, Greek, 510 – 500 BC attributed to the Leagros Group from Vulci, Italy, on show Bendigo Art Gallery, from the British Museum London

Each Amphora, Vase or Kylix (Drinking Cup) on display was decorated all around with stories gleaned from many myths and legends, featuring gods, heroes and stories or told stories about favoured traditions in ancient Greek culture. The technical brilliance of these is truly outstanding and their artists enter the realms of genius when you learn how they worked these mysterious miracles in art.

Black figure painting technically was very difficult. It required three phases of firing in a kiln. It is mind boggling when you know it involved creating the scene with a glossy slip the same colour as its base that only emerged as being black after the object had finished being fired in the kiln.

The red figure technique developed at Athens about 525 BC. Put simply was the reverse of the black figure method, the figures ending up red (the natural colour of the clay) against a black background

Disappointingly they were mostly in cabinets against a wall. Could only wish they had been shown against mirrors or standing out in the rooms in full glass cabinets so we could view their images from all angles too.

This is a stunning show and well worth a day trip to Bendigo, but hurry there’s not much time left. It is the first time the British Museum has toured an exhibition to a regional Australian venue and so a coup for the gallery. It invites visitors to continue their enquiry; to consider how Greek philosophy, drama, poetry, history art and architecture of the ancient Greek world has helped us to shape our culture and our ideas of what it means to be human. There was a reason why the nobleman celebrating the considerable charms of his mistress when recorded on canvas by French artist Jean Honore Fragonard (1732-1806) in his painting The Swing is smiling… she didn’t have any undergarments at all. 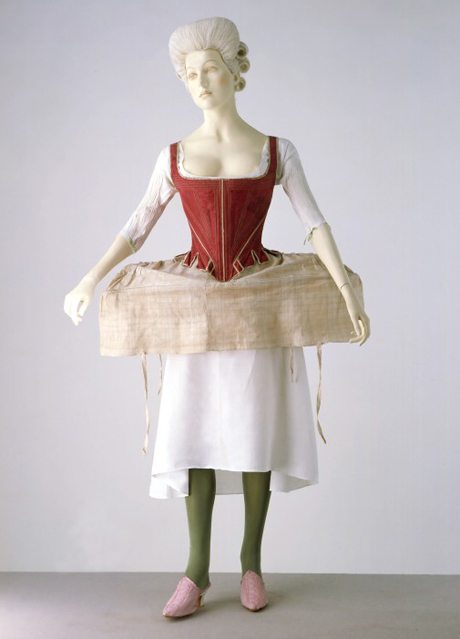 You don’t have much time at all as its ending sooner than the Body Beautiful, if you wanted to take in the second show on view Undressed, displaying a range of intimate apparel.

This exhibition charts our changing social mores and attitudes.

Must say I didn’t respond well to the ‘crammed’ in atmosphere. However, having said that there were some stunning pieces displayed in big glass cabinets filling two rooms, where there was a great deal going on with movies to watch as well.

There are both men’s and women’s garments on show, that particularly emphasize the pain attached to the wearing of women’s undergarments of the past.

Constricting corsets, elaborate bustle pads, crinoline cages and the like, give a good idea of why ladies required personal maids and men needed valets to help them dress whether during the day or night.

Some of those waspy waists created by corsetry made you wonder at our ancestor’s fortitude.

Good to also remember the garments on show from the eighteenth century and early nineteenth century were the preserve of the aristocracy, who had the ready necessary to afford the very fine linen or silk undershirts for men or shifts for the ladies. It may be a surprise to some men shirts were underwear originally, and only became part of a daily dressing equation for everyman during the first decade of the 20th century. It was the expansion of the Industrial Revolution during the second half of the nineteenth century, and the advent of ‘ready to wear’ that undergarments began filtering from the top down to become far more commonplace and accessible to everyone.

Bendigo is benefiting from the visionary approach of its team of curatorial staff at its Art Gallery led by director Karen Quinlin. She seems to keep performing miracles, ensuring that those who live in regional Victoria don’t miss out on accessing great art.

Being in the centre of the state, where it is accessible to many, she’s certainly putting the city on the map and encouraging its growth by raising the bar so high in terms of the quality of what she’s presenting. 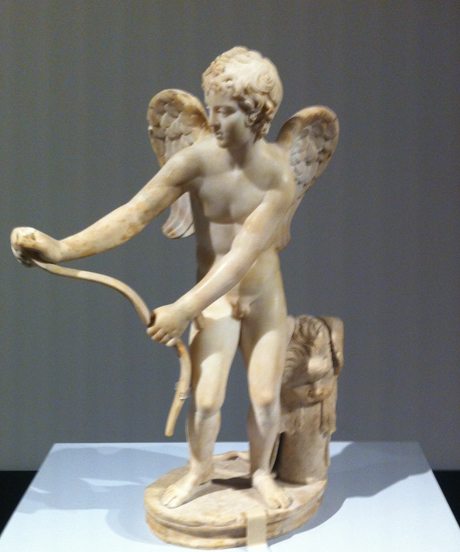 The bonus will be the social and economic dividend received because of the investment being made in building a rich cultural life in Bendigo for residents and visitors alike.

A church or cathedral is made up of sacred shapes such as pointed arches, circles and ogee curves. The circle represents sacred order, the earth, sun, moon, planets and the whole of creation. The ogee shape derives from the architecture of Islam, which is abstract although fine and decorative, portraying…