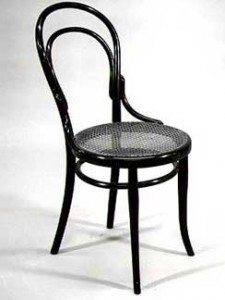 he decorative arts magazine The Studio was devoured in the coffee house culture of Vienna’s cafes at the turn of the 20th century with English fashion, sport and food debated endlessly. The attractiveness of handicraft items issuing from Vienna was demonstrated at the World Exposition in Paris of 1900. Michael Thonet designed the coffeehouse chair, which sold 100 million+. While the history of bentwood furniture dates back two centuries Michael Thonet propelled the notion of bending woods and subsequently tubular metal forward.  His original designs were delicate and lightweight and he established a patent in 1842 for his process. The fluid grammar of motion in this piece suggests movement, even when the chair is stationary. The secret of its success lies in its beautiful aesthetic, technical serviceability, low production costs and competitive price. Thonet chairs are indelibly identified as classics of modern design and still turn heads a century later.

South of Melbourne McClelland Sculpture Park and Gallery is at the gateway to Victoria’s Mornington Peninsula 100 Sculptures set in bush, a must see experience.