Bespoke is such a wonderful word, one that indicates making something special to individual order; to customize and to ensure that whether in your personal or professional life, you receive the best outcome possible.

Based in Sydney and designed with energy and intelligence is a range of tours, which cater for the needs for the needs of individuals, especially those wanting to enjoy a dynamic engagement with their subject, while collecting in the world of contemporary and modern art both here in Australia and Internationally.

Jennifer Garber and Angeline Collings have combined their many years of experience in the world of contemporary art and the art market to create VIP Art Tours. They are offering both personal and professional partakers an appreciation experience that brings with it a buzz of anticipation and a joy at the prospect of great encounters with art in the year ahead.

The objective is to provide an overview that enhances and assists those wishing to hone their ability to evaluate quality in works of both contemporary and modern art at the highest possible level.

Whether they are on the local, the interstate or international scene, collaborators Jenny and Angeline provide an always-unique experience for those participating.

It’s about having an ‘adventure in art’ with exclusive access provided to leading art fairs, galleries, artists studios, auctions houses, as well as private and public museums. “The inaugural tour last year to this event was a great success and clients were quick to praise “ one client J.A said your professionalism was ‘par excellence’ and the organisation perfect”.

Jenny and Angeline are also offering a unique indulgent Art & Architecture Safari to the USA April 29 – May 8, 2015, visiting Los Angeles, Houston and Dallas.

Highlights include Opening Night of the Paris Photo LA Art Fair, which is held ‘on stage’ at Paramount Pictures Studios.

When Jenny was telling me about the tour I couldn’t help thinking just how good Americans are at bedazzling philanthropy on a grand scale. J. Paul Getty and renowned philanthropy during his lifetime was in itself extraordinary.

However his legacy, starting with establishing his own museum to provide access to his personal collection meant that it would be ongoing.

He believed in the teaching power of art, and its civilizing influence.

His personal estate was left to the J Paul Getty Trust on his death, which with inspired management and careful planning has expanded today into the extraordinary institution it is today with two stunning locations, the spectacular Getty Center and the original Getty Villa.

The villa was originally J Paul Getty’s ‘ranch house’ near the Pacific Ocean at Malibu, which he built in 1970. View of the glorious Getty Villa, from courtyard garden, courtesy The Getty

It was based on the design of a first century Roman country house, The Villa dei Papiri in Herculaneum, Italy and is the building that became the first Getty museum.

However as the trust and foundation grew in wealth and acquisitions, it was shut down in 1996 to be restored and expanded.

Now re-imagined with additions, including an outdoor theatre, the Getty Villa showcases its stunning collection of antiquities, as well as a fabulous collection of 18th century French furniture and European paintings. Through its curvilinear design elements and naturally inspired gardens, Meier has also honoured man’s association with both nature and culture.

Meier chose the stone well, with its associations with ideas of architecture from antiquity, which are all about order, arrangement, eurhythmy, symmetry, propriety and economy as its most important design principles.

If observed they ensure ideas of permanence, solidity and endurance. The Getty Centre been built in a second location, a spectacular hilltop position in the Santa Monica Mountains overlooking the grid plan of Los Angeles, laid out inspired by ideas that have their basis in antiquity too.

It houses a collection, which in history encompasses European and American art history from medieval times to the present day.

There is an art history information program in place offering arts education, with a modest grant program and publication initiatives. 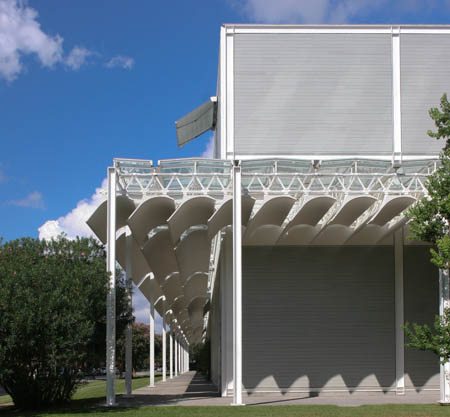 A visit to the Menil Collection and Rothko Chapel in Houston will be yet another great experience.

In Houston some 17,000 + works belong to The Menil Collection, founded by philanthropist Dominique de Menil honouring her late husband John.

They both began collecting during the 1940’s, organising exhibitions for the benefit of Houston residents, lending works nationally and internationally.

She credited her husband with ‘opening her eyes and her heart to art’.

The original building and its precious contents were a gift to her adopted city, her ancestors being French.

It’s as she discussed with Italian architect Renzo Piano, ‘small on the outside, but large inside’.

It’s collection was representative of their passionate eclectic tastes.

There are considered Modernist works by Surrealist artists such as Man Ray, Max Ernst and René Magritte as well as Cubist Pablo Picasso.

The de Menils also moved out of Modernism and embraced Pop Art, so Andy Warhol and Jasper John also became integral to the works on offer for all to see.

Today the centre includes a significant library for students to use for research, some 30,000+ volumes.

The centre has expanded, in a brilliant concept embracing a series of low rise bungalows nearby to serve as additional buildings; including administrative offices and fellow arts organisations, creating an entire ‘aesthetic’ campus. The ‘broken’ obelisk by Barnett Newman, a feature of the grounds surrounding the Rothko Chapel, where art, design, nature and spirituality all meet… the head the hand and the heart

The Rothko Chapel is integral to this place where art and spirituality meet and where human rights are a huge consideration.

It’s mission is “inspire people to action through art and contemplation and provide a ‘forum for global concerns’. It was built it as a sanctuary for people of all faiths Cy Twombly Gallery houses a body of work that is at once baroque and spare, ancient and modern

The Cy Twombly Gallery is part of The Menil Collection, and nearby too. International contemporary graffiti painter and freehand drawing master Edwin Parker aka Cy Twombly (1928 – 2011) known as the ‘bloke who best does blotches and scribbles’* last commission for the Louvre at Paris, was a great canopy of creativity, a fine example of ‘art above’. The Kimbell Art Museum, Fort Worth, Texas is renowned for its specialist exhibitions of ‘impressionist art’. It was established in 1936 by Kay and Velma Kimbell, together with Kay’s sister and her husband, Dr. and Mrs. Coleman Carter.

“They had a focus on ‘excellence’ and for creating a museum that was first class” said Jenny, “which is what we are all about too at VIP Art Tours”.

Today The Kimbell Art Museum offers a fine select array of works that not only epitomize the periods, movements and styles they showcase, but also touch on individual high points of aesthetic beauty and historical importance. The museum project was another fine example of American philanthropy at its best, with a focus on quality, not quantity.

The aim was not historical completeness, but acquiring individual objects as determined by their condition, rarity, importance, suitability, and ability to communicate. The core collection was fewer than 350 works.

The rationale behind it was that a single work of outstanding merit and significance is far more effective as an educational tool than a larger number of representative examples.

The original Kimbell Art Museum building, established in 1972 was designed by award winning American architect and professor of architecture at the Yale School of Architecture 1947 – 1957 Louis I, Kahn (b.1901- 1974).

It has become famous for its incredible inviting atmosphere of ‘natural light’ created by featuring ‘repeated bays of cycloid-shaped barrel vaults with light slits along the apex, which bathe the artwork on display in an ever-changing diffused light’ in a building that is low and spacious.

Carter Wiseman, author of Louis I. Kahn: Beyond Time and Style, said that “the light in the Kimbell gallery assumed an almost ethereal quality, and has been the distinguishing factor in its fame ever since”. In the precinct is another great example of architecture, the later added and named Louis Kahn Building designed by architect Renzo Piano, again with an emphasis on natural light. This is a tour that should engage its partakers intellectually, aesthetically, artistically and spiritually.

Angeline and I are planning an exciting program revealing the intrinsic qualities of art” said Jenny.

VIP Art Tours will also visit London for the Frieze and Frieze Masters Art Fairs both in October 2015. These fairs offer works by cutting edge and emerging artists, alongside acclaimed contemporaary artists of our time.

“It’s deadly serious and our people have an opportunity to gain an understanding about works that will help to define the future of art”… observed Jenny.

Established in 2003 by Matthew Slotover and Amanda Sharp, Frieze London is considered one of the world’s leading art fairs and takes place each October in The Regent’s Park, London.

Frieze Masters is a carefully selected presentation of over 120 of the world’s leading galleries, showing art created before the year 2000 with, and within walking distance of Frieze London.

Visitors can discover a huge variety of work, while making contacts with representatives of leading institutions worldwide.

Both of these festivals of art sound like a great place to visit not only for art enthusiasts, art collectors and curators but also for critics and artists too, where the prevailing spirit of joi de vivre surely masks the serious business really going down. Frieze Masters exhibition at London, on again in October 2015

With buyers from the Middle East, Europe, Asia, and the United States all flocking to London, and with access to that cities other teaching museums and art galleries, VIP Art Tours of Sydney certainly have their finger on the pulse of art in the 21st century.

Angeline noted by tapping into our networks both Jenny and I are specializing in our customers enjoying great experiences of, and encounters with great art.

All enquiries to Jenny and Angeline … www.vipart-tours.com

Emmeline Pankhurst from Manchester led the fight during the late 19th and early 20th century to gain equal rights for women, a movement that is ongoing globally