What do you compliment a huge success like the sell out long queues still happening for the ancient Life & Death in Pompeii and Herculaneum show now on at The British Museum or small gems such as Ice Age Art, arrival of the modern mind with?

A ‘golden’ opportunity to fuel a desire for the dazzling seductive myth about a lost gold city, you know, the one that has fascinated treasure hunters and explorers since the days of the Spanish Conquistadors in South America, as well as novelists and movie makers all.

The blindingly dazzling exhibition Beyond El Dorado: Power and Gold in Ancient Columbia organised in conjunction with Museo del Oro, Bogotá will be on display at The British Museum 17th October 2013 – 23rd March 2014. It will explore the richness and diversity of Columbian culture before the 16th century arrival of the Spanish, which changed everything.

A particular focus on the Muisca, Quimbaya, Calima, Tairona, Tolima and Zenú chiefdoms will be explored, in what is a unique exhibition from the British institution, which is certainly red-hot right now!

Early Spanish conquistadors took stories back to Europe about how the Pre-Columbian cultures they encountered had evolved the techniques required to produce highly sophisticated, simple gold works of art and, that the people covered themselves from head to toe in gold ornaments made with superb craftsmanship. Interestingly, El Dorado, literally means ‘the golden one’ and really refers to a ritual that took place at Lake Guatavita near modern day Bogotá, where the newly elected leader of the Muisca people dived into a lake covered in gold and emerged reborn as their new chief.

While the gold objects they wore promoted the growth of myths and legends, for those wearing them it did not hold any monetary value, but instead was all about respecting a gift from the sun that bathed them all in its golden light.

Gold has long been prized in many world cultures for its intrinsic and symbolic worth and is redolent of many virtues – mythical and religious. In many ancient and historical cultures gold symbolized the Sun and was an attribute of truth personified, because it revealed all by its beautiful light.

Although not used for currency in pre-Hispanic Columbia, Gold’s symbolism for their society’s culture was intrinsically important as a statement about their elite’s semi-divine status both in life and death Gold is a wonderful substance in that it also resists both rust and decay, so in many ways for ancient peoples it was completely miraculous.

Gold lasted and was protected when hidden in the ground that gave it birth and over the centuries many a persecuted person escaped the terrors of war by sewing gold coins into the seams of clothes they were wearing. The display of exceptional objects will offer an insight into the network of societies in ancient Colombia, which was a hidden world of distinct and vibrant cultures spanning from 1600 BC to AD 1700.

The show will feature over 300 exquisite objects drawn from the Museo del Oro in Bogotá, one of the best and most extensive collections of Pre-Hispanic gold in the world, as well as from the British Museum’s own unique collections. The remarkable objects on show will reveal glimpses of the different cultures’ spiritual lives, including engagement with animal spirits though the use of gold objects, music, dancing, sunlight and hallucinogenic substances, which was all about enacting a physical and spiritual transformation, enabling communication with the gods.

Powerful pieces with animal iconography demonstrate the depth of their imagination by showcasing avian pectorals, necklaces with feline claws or representations of men transforming into spectacular bats though the use of profuse body adornment.

Ancient societies developed their own ways of understanding the many mysteries about the earth and their surroundings in their time. Giving order or making sense of our surroundings is a basic human instinct, imperative for survival.

All early cultures on earth developed their own unique way of explaining them through creating objects from all sorts of materials and giving them a symbolic content that emphasized their own beliefs.

Death, illness and the meaning of life were every day occurrences they were searching to find answers for. Establishing a link between a man and his ancestors was essential to their ideas of continuity. It was for them, as it is for us know, all about security. 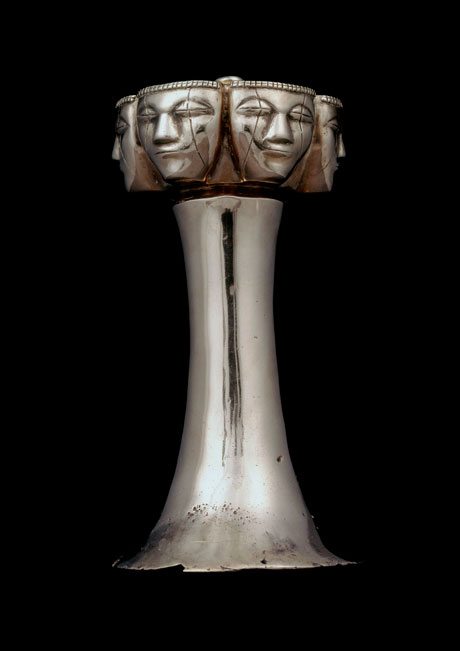 As gold symbolized the warmth of the sun that caused their crops to grow they used it to express the divine origin of the powers their leaders possessed.

For without the sun they knew their crops would fail and prosperity would be denied. So they transferred all their hopes and dreams onto the success of their leader, who they hoped would help the Gods to help them.

Decking their chief out in gold and providing him with objects of gold to assist him during his afterlife made great sense.

Other fascinating objects on show will include an exceptional painted Muisca textile and one of the few San Agustín stone sculptures held outside Colombia. Those, together with the spectacular large-scale gold masks and other materials that were part of the objects that accompanied funerary rituals in ancient Colombia will be sure to attract much interest.

Exploring the sophisticated gold working techniques, including the use of tumbaga, an alloy composed of gold and copper, which was used in the crafting of the most spectacular masterworks of ancient Colombia will be an important focus of the show.

They used special tools, ovens, varioius techniques including the lost wax method to produce precise work that is very impressive.

Extraordinary poporos (lime powder containers) showcase the technical skills achieved both in the casting and hammering techniques of metals by ancient Colombian artists.

The Bank of the Republic of Columbia in 1939 began protecting the archaeological history of Columbia by putting the collection of over 30,000 gold objects and 20,000 pieces of ceramics, textiles etc from pre-Columbian cultures from the Columbian region of South America together.

Neil MacGregor, director of the British Museum said, “Ancient Colombia has long represented a great fascination to the outside world and yet there is very little understood about these unique and varied cultures. As part of the Museum’s series of exhibitions that shine a light on little known and complex ancient societies this exhibition will give our visitors a glimpse into these fascinating cultures of pre-Hispanic South America and a chance to explore the legend of El Dorado through these stunning objects.” Beyond El Dorado Power and Gold in Ancient Colombia

Melbourne’s gold boom mansion Ripponlea is a national jewel in trust for our nation, with its rich cultural mix of French, Italian and English design influences