The Bibliotheca Alexandrina, or new library of Alexandria is a massive project, inspired by the enormous repository of knowledge amassed by the Egyptian civilisation over three millennium and then lost when the ancient library caught on fire during a battle with Roman General Julius Caesar and burned to the ground. This all-new library was originally a project by UNESCO, that has been funded by contributors from all over the world. It opened its physical doors to the world in 2002, sharing knowledge freely as a practical means of aiding an understanding between world cultures.

A publication by Bibliotheca Alexandrina in Egypt, In The House of the Muses contains a fascinating array of faces of people working in this state of the art complex at Alexandria. It includes Alexandrian personalities and faces from Alexandria, as well as those from Australian society who are the libraries active friends. It also features Antipodeans of Note and other distinguished ‘faces of Australia’ in both town and country settings. They are a handpicked collection recorded by Australian Photographer Susan Hagon and produced in collaboration with designer Darian Zam. 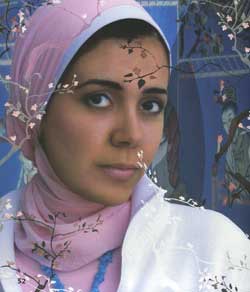 Stunning Portrait of BA Secretariat Sarah Tonbyol photographed by Susie Hagon and detailed by designer Darian Zam, In the House of the Muses published by Bibliotheca Alexandrina, Egypt

Many of the images are powerful, stand alone stories, while others have been overlaid by the designer with intricate decorative details. They may seem distracting from the artistry attached to the photograph for some, while others will view the additional designs as complimentary. Striking a balance in the world of art and design is always a challenge, especially if we want to see the hand, the head, and the heart of man in harmony. The book was inspired by an outstanding exhibition entitled “In the House of Muses” first presented to Australian society in Sydney, Canberra and in Egypt at the new library at Alexandria during 2008. One of the libraries main aims is to encourage publications that inspire communication and inter-cultural conversations. If we seek to engage in such an important dialogue, surely it will help us to better understand the nature of cultural difference. 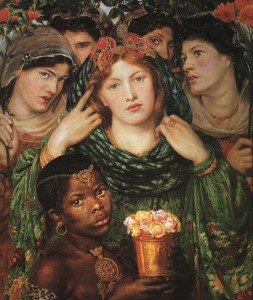 The title of the show and the name of the book with its title draws us back to ancient times when Muses were believed to have the power to inspire a poet, artist, thinker, or the like. Originally in Greek mythology this included any number of sister goddesses; Aoede (song), Melete (meditation), and Mneme (memory).

Latterly and more commonly however, the Muses were the nine daughters of Zeus and Mnemosyne, who presided over the various arts: Calliope (epic poetry), Clio (history), Erato (lyric poetry), Euterpe (music), Melpomene (tragedy), Polyhymnia (religious music), Terpsichore (dance), Thalia (comedy), and Urania (astronomy). They were identified by the Romans with the Camenae, goddesses of childbirth, wells and fountains, and prophetic deities.

No longer can we afford to lose valuable knowledge, as the world did so dramatically during the period known as the Middle Ages from the fifth to the fifteenth centuries in Europe. What knowledge was saved from the Roman Empire and other important world centres during that time, only survived because of a tradition established by religious institutions, for that of copying documents and manuscripts to ensure that knowledge, which was a point of power was not lost. 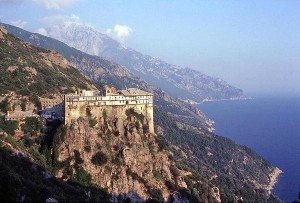 The monastery of Simonas Petras on the southwest coast of Greece

For nearly a thousand years wars continually raged around monks in monasteries hidden in quiet valleys, spectacularly sited on high mountaintops and on remote islands, as they struggled patiently to help manuscripts from antiquity survive until people stopped going to war.

During that time a merchant from Pisa, Leonardo Pisano Bigollo (c1170-1250) or Bonacci known more generally as Fibonacci, in his travels discovered the Arabic arithmetic system. He detailed it in 1202 when he published his Liber Abaci, or Book of Calculation.

This introduced Hindu-Arabic numerals and other methods of mathematics into Europe. Fibonacci had worked out that sequences appearing in different biological settings such as branches on trees, the arrangement of a pinecone, the breeding of rabbits, curves on a wave, as well as a family tree of honeybees followed the unique patterns that could be solved by mathematical equations. A whole new dawning of consciousness and an exploration of the relationship of the individual to the natural world meant that during the fifteenth century in Europe nature became the embodiment of truth. In 1414, while on a visit with the Pope to a Benedictine monastery, Florentine scholar and historian (Gian Francesco) Poggio Bracciolini (1380 – 1459), while waiting patiently waiting for his patron accidentally discovered a handbook about the ancient Roman system of education called The Training of an Orator in its Scriptorium.

This document, as well as later finds, inspired an intense scholarly pursuit by those whose passion for exploration was directed toward searching monasteries for manuscripts, and then copying and translating their texts.  Roman authors rediscovered included Ovid, Livy, Lucretius and Statius. At St. Gaul in the same year Poggio made another discovery, the ancient architectural manuscript written in the first century by Roman engineer and architect Marcus Pollio Vitruvius.

This work discussed all types of Greek and Roman building, civic and domestic, architecture, town planning, water supplies, civil engineering, geometry and astronomy, including methods of decoration in stucco and fresco. Vitruvius’ manuscript suddenly become known to contemporary architects from an edition published in 1486. His voice spoke across fourteen centuries when he declared ‘without symmetry and proportion no temple can have a regular plan; that is, it must have an exact proportion worked out after the fashion of the limbs of the finely shaped human body’.

Poggio Bracciolini also surveyed and recorded the ruins of Rome in 1430. He left behind a description of the scene, which was later recorded by Edward Gibbon in his Decline and Fall of the Roman Empire – ’the public and private edifices that were founded for eternity lie prostrate, naked and broken, like the limbs of a mighty giant; and the ruin is the more visible from the stupendous relics that have survived the injuries of time and fortune’. Gaining new skills and aptitudes requires long-term support that traditional institutions like libraries have always provided. 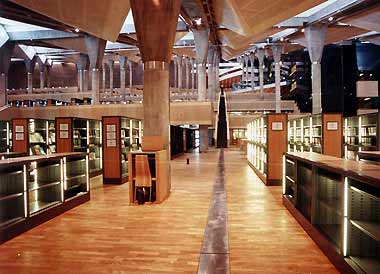 The Bibliotheca Alexandrina is storing knowledge from both books and the digital age. It offers important art and cultural exchange opportunities through its research centres, permanent exhibitions, planetarium, and conference centre. As well, it is playing host to a growing number of world cultural institutions. It has a goal of providing an opportunity for everyone regardless of race, creed or culture, to have a chance of studying original texts first hand.

Whether they are stored in a building or on line, importantly amazing images and erudite texts will surely inspire ideas, imagination, creativity as well as action long into the future so others can also enjoy the benefits of 21st century enlightenment.

Recipes used to treat victims of the Great Fire of London 1666 will be on show at the Royal College of Physicians from September 1, 350 years since the disaster