Big Little Lies directed by Jean-Marc Vallée starts with a murder at a school fundraiser and along with the parents at Pirriwee Public School we ‘are about to discover, sometimes it’s the little lies that turn out to be the most lethal’.

Presenting the somewhat seedy side of life in what others perceive to be the perfect family unit, what a screwed up bunch the constantly stressed out mid life primary school age parents of Monterey in California seem to be.

One would think based on visual perceptions that they have it all; designer clothes, fabulous houses and gardens, many with ocean views and as an average, two perfectly controlled children, who are in reality 8 going on 80.

Underlying it all is a great deal of unhappiness, some bitterness and family violence taking place behind closed doors. Consisting of seven episodes, Episodes 1 – 2 have the punchline; never forgive, never forget.

Some of the parents involved are not just helicopter parents, taking an overprotective and excessive in in the life of their children, they could be described as kamikaze parents. The storyline progresses the lives of the central characters by reliving the past that led up to a terrible event that takes place on the annual fundraiser School Trivia Night, which we discover ended in full-blown riot and one person dead.

We are informed the victim has sustained a broken pelvis and fracture at the base of the skull, a fact we find out when we join the police arriving to investigate. This is truly a school for scandal where sharing is caring is the motto often taken to extremes.

We become voyeurs of those involved, given an insight into they’re lives by being gradually informed in flashback. What has really happened? Eyewitnesses being interviewed by police report the murder has its origins on school orientation day. Madeleine McKenzie (Reese Witherspoon) is travelling with her primary school age daughter Chloe (Darby Camp) in her car on the way to school for orientation day. She stalls behind teenagers driving erratically in front of her because they are texting. Alighting to give them a piece of her mind she finds out that one of the passengers is her teenage daughter by her first husband and she blows her top!

Returning to her car angry Madeleine falls over. Hurt and limping she is rescued like a wounded dog in the street by Jane Chapman (Shailene Woodley), who is delivering her son Ziggy to school for his first day. Jane offers to drive the injured Madeleine and Chloe to school to help her out, although we are aware she’s hesitant to do so. As we discover, Jane who runs on the beach everyday, has only recently moved to town and is living quietly hoping not to attract attention. Chloe takes a shine to Ziggy and pleased, Madeleine enlightens Jane that for Ziggy walking into school with Chloe on his first day is like having a golden ticket. The yummy school mother’s run has them all gushing away at the gate giving each other compliments they don’t mean, while showcasing their own celebrity status.

Looking long lean and gorgeous Nicole Kidman as Celeste Wright Madeleine’s best friend is at the gate with her two energetic boys when Madeleine and Jane arrive. Celeste has the very cool, or should we say very hot handsome Alexander Skarsgård aka Tarzan as her husband Perry Wright, making everyone indeed envious… he’s younger too. All that beauty however we soon find out also has its dark side. Alarmingly behind closed doors Perry seems to have an underlying propensity for violence, which should be worrying Celeste in the extreme, instead of exciting her.

By the time the parents arrive at the school gate that afternoon to pick the kids up after their first day they find the new boy Ziggy is being loudly accused of attempting to strangle a little girl in his class. The teacher involved handles the whole situation badly… asking the child to point out who attacked them in front of all the kids and parents… and she points her finger at the new boy… Ziggy. But is it the truth…? He says no… The victim’s mother Renata is suddenly doing all the yelling at Jane and Madeleine, and it’s not hard to see why she’s considered an arch bitch by the others. She’s financially independent, on the school board an envy for all, she goes off big time at Ziggy without finding out first if he is indeed responsible… no caring and sharing here – he is certainly not innocent until proven guilty and Madeleine lets her know her displeasure.

After this happens, Jane is found the next morning following her run on the beach staring at the ocean, powerful… full of life and mystery. What lays beneath the surface… it’s so much bigger than us all. She reminds Ziggy who doesn’t want to go to school the next day… about how they are going to adopt a mantra together; we’re going to be so brave. Celeste needs to be brave too. Perry is slapping her around… angry he didn’t know about orientation day because he had planned to be there – he’s a control freak that’s for sure, a power player in business and their sex life; always having to dominate to prove it.

While her friends are all busy talking through their problems, Celeste is busy having Skype sex with Perry to keep him happy and content while he is out of town, at least a respite from receiving more bruises she has to hide. Heaven help her though if she forgets to tell him one thing while he is gone.

Madeleine unlike most of the mothers only works 20 hours a week so she can be there to pick up the kids… her second husband Ed (Adam Scott) is the steady as she blows type, who worries why she’s always too tired or distracted for them to enjoy their sex life. Madeleine has a low tolerance for injustice and champions every cause at the drop of a hat making everyone else’s priorities her own instead of looking to what her life is missing.

Ed her main man is grounded but fed up with her too because she is always harping on about her ex, who she runs into everywhere she goes. Ed’s not someone content to be the runner up to Nathan Carlson (James Tupper).

He demands a meeting with Madeleine to discuss drawing lines in the sand with their teenage daughter, although it looks like a case of the stable door being open and the horse having bolted. The second day at school Chloe masterminds Ziggy to make up with his accuser by kissing her. Instead of having a peace making effect it creates an international incident with Renata once again outraged. She comes to the school and hands out invitations to her daughter’s party to everyone except Perry, deliberately making a point to all the other kids that’s he’s guilty.

Did I say these people were all supposed to be intelligent adults!

Madeleine in retaliation invites some mothers and kids to go and see Frozen on the same day as the party Ziggy has been excluded from… because she believes they are all just children who are supposed to be doing things like kiss and hug each other at this age. Her actions will have repercussions. Jane can’t cope with all their dramas, although she’s unwittingly perhaps drawn to being with Madeleine and Nicole. They all meet up after the school drop off for coffee by the water to talk relationships and about Madeleine’s idea for the annual school fundraiser.

Renata intervenes and Madeleine threatens her. Nicole returns home to find a bower of flowers.

Check out all our Episode reviews 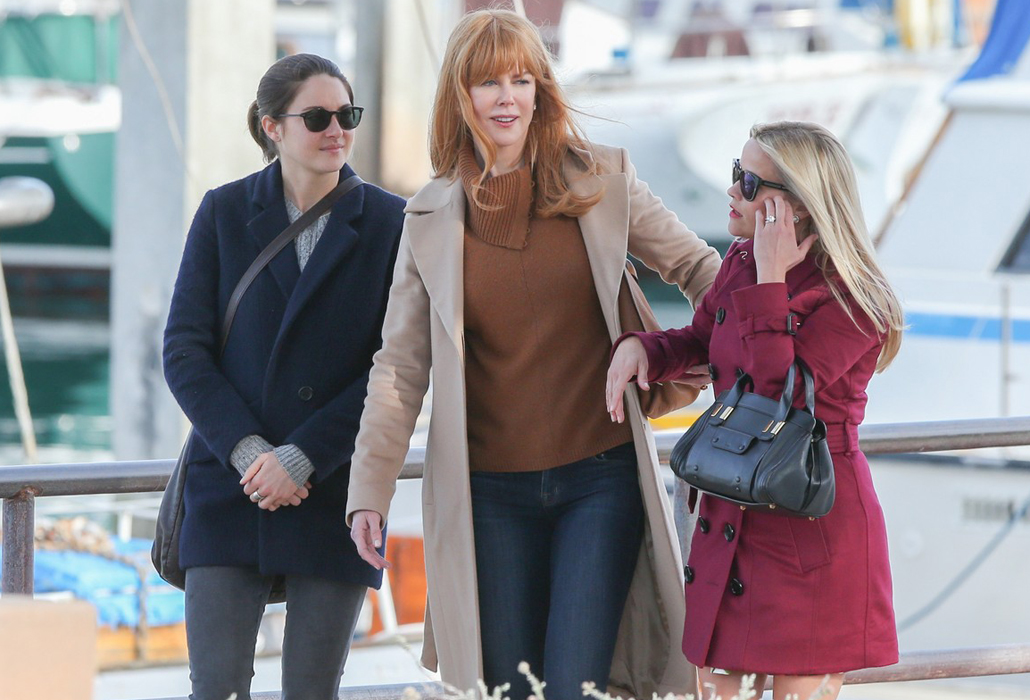 The fashion design legacy of Spanish born fashion designer Cristobal Balenciaga who used drape, shape & cut to catch the eye will be on show at the V & A in May