The HBO limited TV series of seven episodes Big Little Lies with its superb ensemble cast of adults and children, is an insight into the lives of a group of parents with primary school children living in and around Monterey, California.

Created and written by David E Kelly, Big Little Lies is based on the #1 New York Times best selling book by Australian author Liane Moriarty. It is about ex-husbands, second wives, mothers and sons, fathers and daughters, schoolyard scandal and the so called ‘little’ lies we tell ourselves on a daily basis just to survive.

We first met the sterling ensemble cast in Episodes 1 and 2, after there has been a terrible event, one that took place on the annual Pirriwee Public School Trivia Night, which ended in full-blown parental meltdown and one person dead. 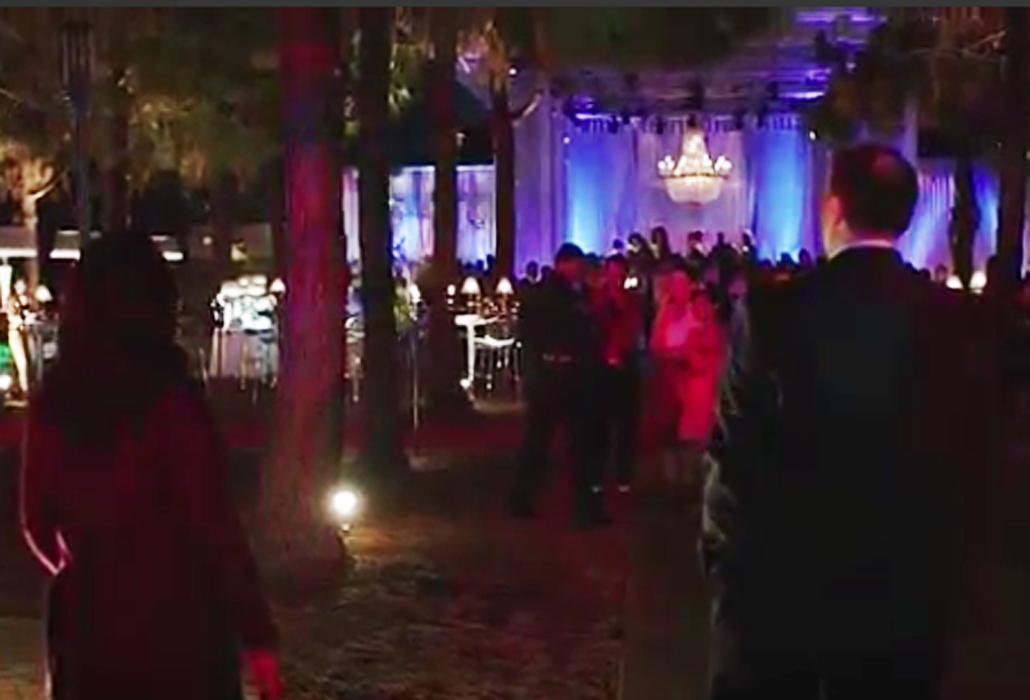 Sirens are wailing, people are screaming, the principal is mortified and there is a great deal of heavy breathing going on.

One parent is dead although we don’t know who (my guess – he’s handsome) and the chain of events that began on the kid’s first day back at school is still rolling along.

We are visiting the event in flashback as we are drawn into their lives upclose and personally and it is not very pretty. 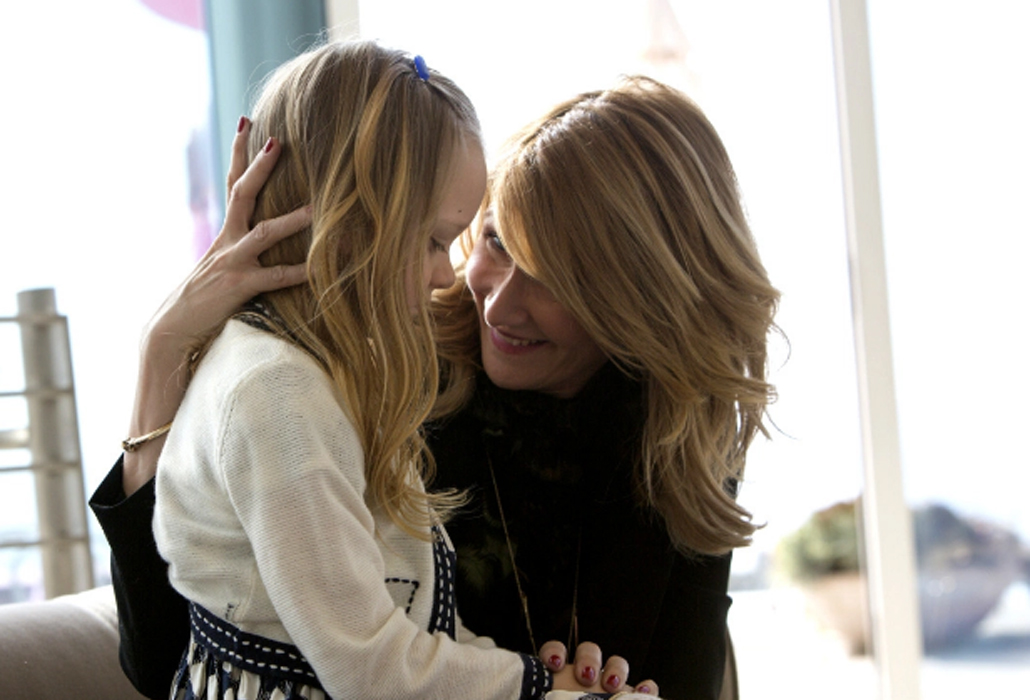 In Episode 3 Renata (Laura Dern) is trying to explain to her daughter Amabella (Ivy George) why a great many of her friends from school are not coming to her birthday party… not an easy tell for any parent.

At Pirriwee Public School Amabella and her friends are taught ‘sharing is caring’ but someone forgot to deliver this important message to all the kid’s helicopter, or in some instances kamikaze parents, who act on accusations, not on facts. 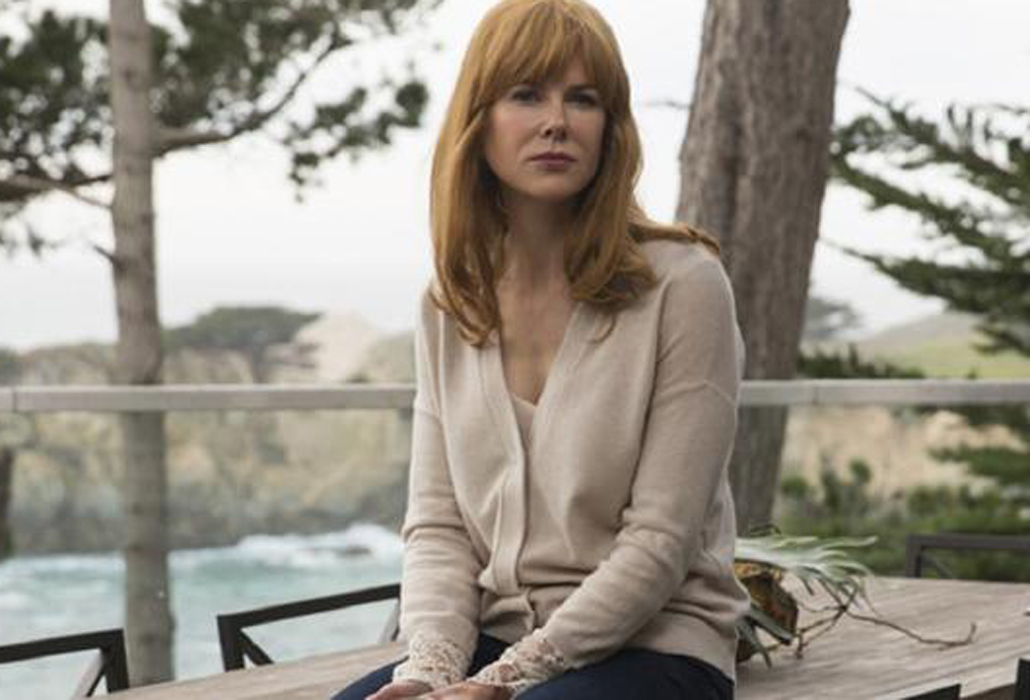 Celeste (Nicole Kidman) is still in trouble behind closed doors where her perfect and handsome husband Perry (Alexander Skaarsgard) puts her in a chokehold to make a point he’s making.

She threatens to leave him if he touches her like that again. To make up he buys her a diamond necklace and then demands a sexual encounter of the violent kind. Madeleine (Reese Witherspoon) is at home working on a school project for Chloe (Darby Camp) when Renata rings to apologise for not inviting Ziggy (Iain Armitage) to the party and would she give her the phone contact for his mother Jane (Shailene Woodley) so she can invite her to bring him along. Her daughter is freaking out Chloe the golden girl from school is not coming and so its working out how Madeleine planned. Madeleine is not in a forgiving mood and she confirms to Renata that Ziggy, Jane and a bunch of ‘others’ are all going to Disney on Ice with her and she doesn’t give her prey an inch, despite much begging going down. Renata hears Chloe stating her opinion out loud that she would rather be at the party than the show… and Renata tells Madeleine she will make sure she is ‘finished’ in this town.

As a woman of power and influence with people at the top of society, she knows she can bring any opponent down.

The limo picks Madeleine and her band of friends and children up and with champagne along the way they are all seemingly having a good time. Meanwhile Renata’s husband Gordon (Jeffrey Nordling) is playing up at his daughter’s party having smoked pot before everyone came. There’s not much happening for the children, it’s the parents who are all dancing to the music especially, Bonnie (Zoe Kravitz) who is married to Madeleine’s ex Nathan (James Tupper).

Renata wants her daughter age 6 to go to therapy but her husband Gordon is opposed. He tells her she overthinks everything and suggests sex on the desk… but gives in to having it in the bathroom instead, smashing up everything around them

Celeste has taken her husband Perry to therapy… but will it work? How can they learn to let go their anger and draw a line between passion and rage, which he admits is one they ‘cross’, although looking at Celeste’s body language we can see the therapist is not convinced the rage is mutual. Perry reveals he is worried about all the men waiting in a line for him to fail or for his beautiful wife to outgrow him. He’s constantly looking for evidence Madeleine is unfaithful. She says he frightens her and that when he gets physical she fights back and that she feels so ashamed when they have crazy angry make up sex. They have a dirty secret she admits to the therapist, but will she share it?

Madeleine’s ex Nathan asks to see her… about their teenage daughter Abigail (Kathryn Newton) coming to live with he and Bonny – Madeleine helps Abby to pack and move out and he thanks her for being so intelligent about it all, not knowing that Madeleine is gutted. Jane’s watching Ziggy try out for baseball. He’s reluctant, but get’s a home run and so she’s ecstatic as she wants him to be as well. He reminds her that she has to help him set up his family tree – it’s a project from school and she asks Madeleine to help.

For Jane his mother, this is a traumatising experience, as Ziggy doesn’t know it but he is the result of a rape his mother has tried her best to get past. She thought she was over it, but now the horror keeps flooding back and she will not be able to give her son his father’s name to go on his poster board.

The simple things so many take for granted are really so complex for many others, who just want to move on from horrendous traumas and live as normal a life as they can without having to explain themselves every minute and over and over.

But s*%$# happens and there is more rage out there than we can possibly imagine. Every night when it’s time to turn the light, Jane puts her gun under her pillow and who would blame her. Celeste is back home with Mr Perfect, feeling hopeful that he has changed. But is it just an act? Do men really change? He invites her to dance with him

In Episode 4, Nathan and Madeleine are meeting because Bonnie wants him to talk to invite she and Ed to dinner. She rings Celeste to ask her advice, as it is not something she would want to do.

The mayor is trying to shut down the play Madeleine is producing for the community at Renata’s insistence – it is not appropriate.

Perry hears Celeste and Madeleine on the phone having a conversation and is angry he doesn’t know what they are talking about. He tells her he’s worried about her stress levels. 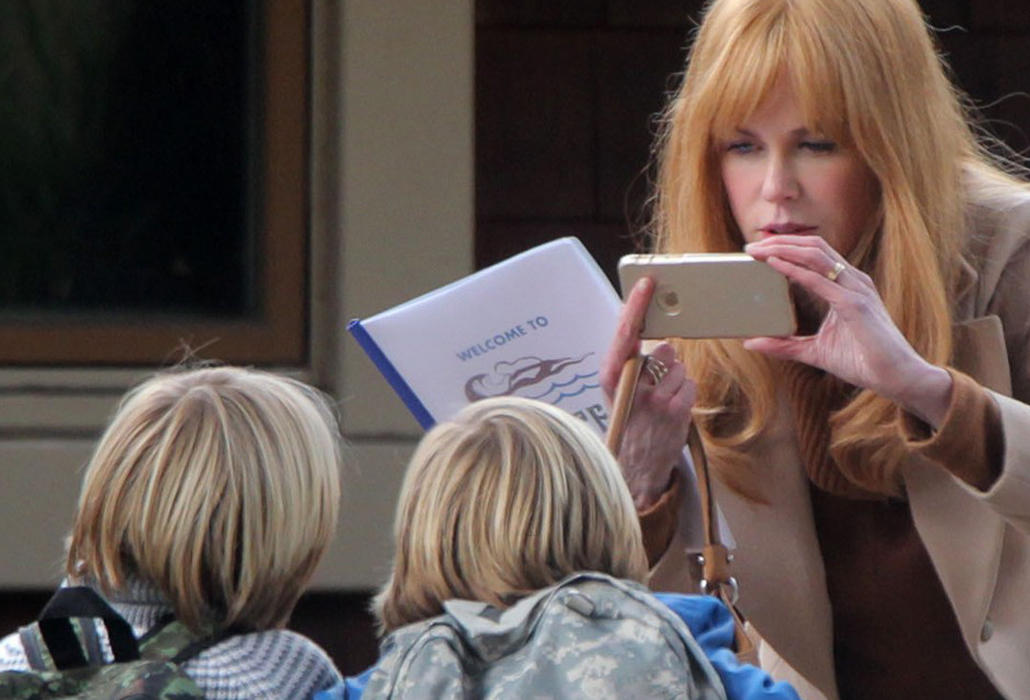 He wants to have another baby and she tells him she doesn’t want one, she already has Josh (Cameron Crovetti) and Max (Nicholas Crovetti) to look to.

Jane and Madeleine meet for coffee to talk about her revelations again and Celeste arrives to join them just as Jane tells her she’s thinking of moving again… Ziggy is not happy is the excuse.

She doesn’t want to face the fall out at the school from him not completing the family tree project.

Ed goes to see Bonnie about the dinner, telling her Nathan and Madeleine is a volatile combination and he would prefer it didn’t happen. However if it is then he wants her to know it will be up to the two of them to keep the peace… especially telling her she must not give Madeleine ‘advice’. 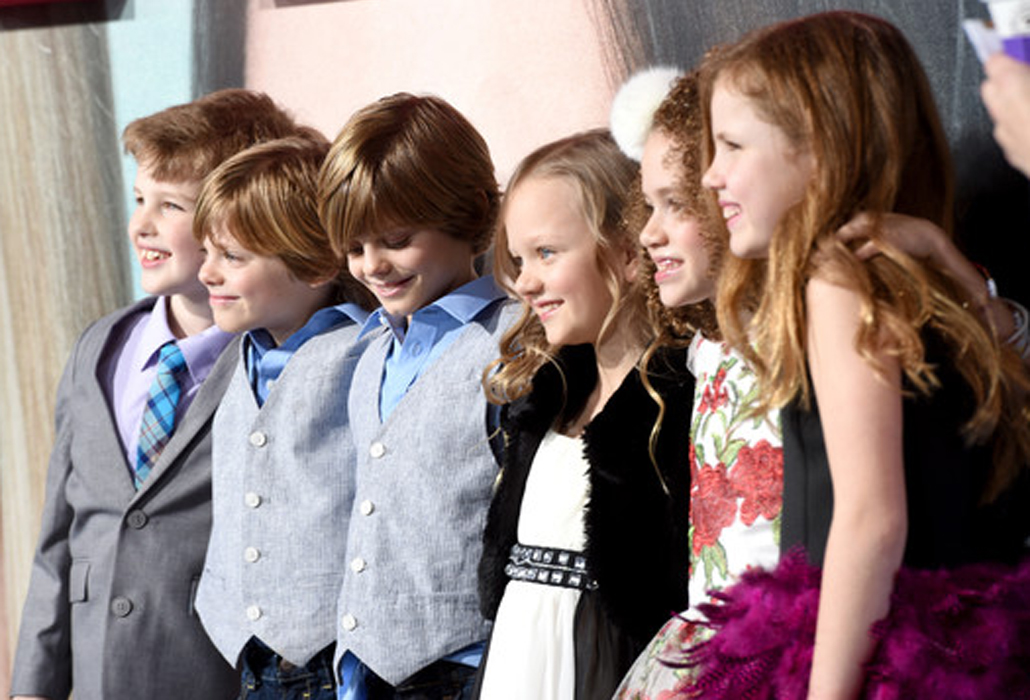 The kids in school are all singing except for Renata’s daughter Amabella. She’s withdrawn and white looking, and the teacher calls her back as the class leaves to talk to her. She tells her Ziggy is nice to her, and the teacher is concerned there is still bullying going on.

Celeste and Madeleine are now in a meeting with the Mayor, who wants the entertaining piece of theatre Madeleine is producing to bring the community together not split it apart.

Celeste gives an amazing speech that puts a halt to the Mayor’s objection to the work going forward and being shown legally. It makes her realise that being a mother is really not enough for her. Being back doing legal work her first career, made her feel alive again. She and Madeleine both agree, they also enjoyed the feeling of winning. 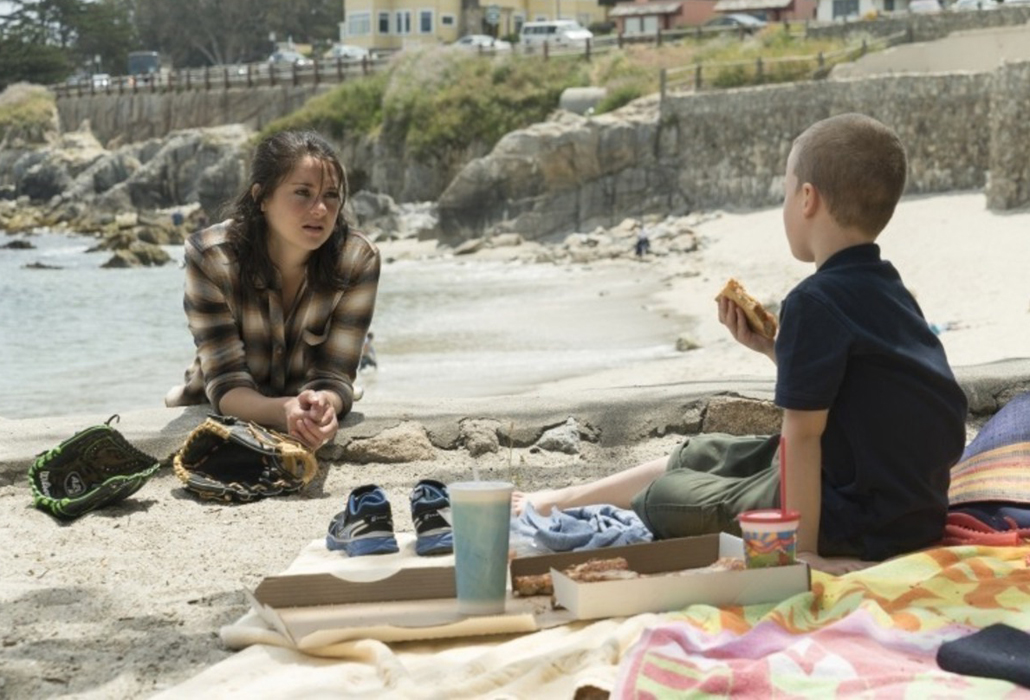 Jane is meeting Ziggy’s class teacher for coffee outside school as she thinks he’s still being violent towards Amabella, but Jane cannot believe that he is the culprit. How can she prove it though? Jane takes Ziggy to the beach so she can talk to him about seeing a psychologist to find out what she thinks of her son’s personality.

Celeste and Madeleine are having a glass of wine together and she tells her how her director of the play suddenly kissed her and they had a moment together, with him telling her he loves her and she blows him of. Madeleine is staring at the sunset thinking how lucky they are she tells Ed, when he catches her. She knows he has visited Bonnie, as there are no secrets in this town and he’s a bit taken aback.

Celeste and Perry are getting dressed… she has a meeting with the attorney representing the town. He’s not happy that this might turn into a court appearance and attacks her again, but thankfully their son arrives for her to take him to school.

Jane is out running reliving all her traumas and the shooting of her attacker in her head… she breaks down and dreams of throwing herself of a cliff. We are now a long way from sharing and caring and I am not sure any of these parents as role models, can teach forgiveness.

Pinchgut Opera in only ten short years of innovative and outstanding productions, have become a classic opera company in the fullest sense of the word, of the first or highest quality, class, or rank. This piece will be sure to be joyous. It is an outstanding work and represents the culmination of Vivaldi’s opera writing career. You will just have to be there!