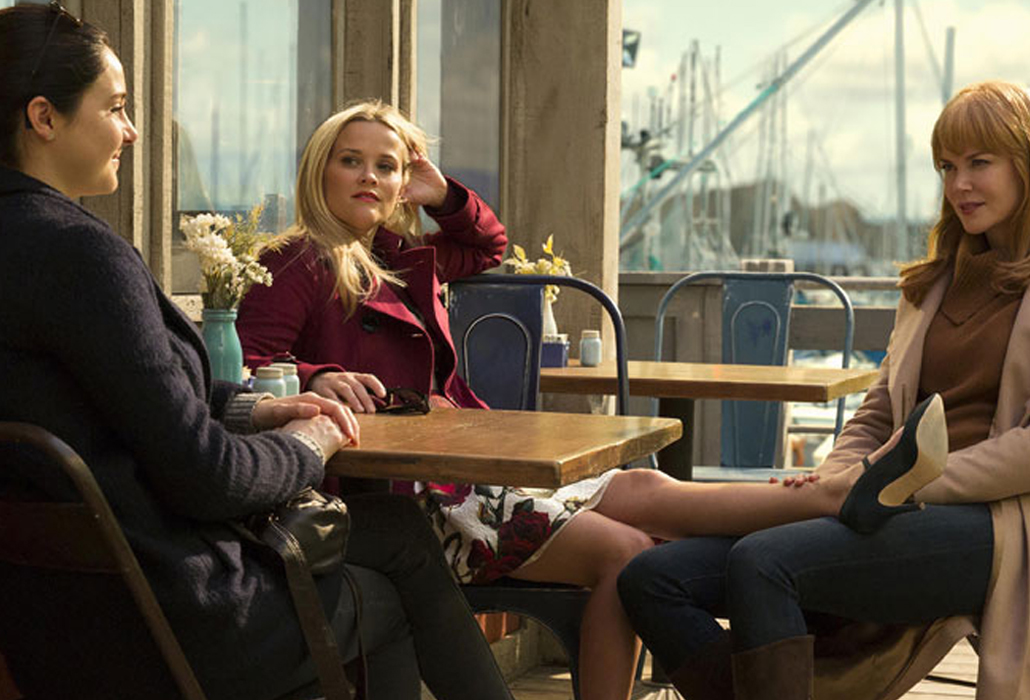 The Helicopter parents in HBO’s hit Television series Big Little Lies set in Monterey, California, are ramping up the action in Episode 5 and 6 of the 7 part series.

Madeleine (Reese Witherspoon) and Jane (Shailene Woodley) are having coffee. Jane has been practicing her shooting with her gun at the range and while Madeleine disapproves, she admits there is more than one person she would like to shoot in this town. Renata (Laura Dern) is dressing her daughter Amabella (Ivy George) and finds a bite mark on her shoulder and as usual gets angry telling her you have to stand up against bullies. Her husband Gordon (Jeffrey Nordling) wants her to take their daughter out of school, but Renata who has serious anger issues, is unable to have a civil conversation about the problem.

Celeste (Nicole Kidman) is wondering why her husband Perry (Alexander Skarsgard) is not playing tennis… when he suddenly appears, tears her clothes off and has violent sex with her on the kitchen sink… he’s so jealous of her it’s palatable. Madeleine, Celeste and Jane (Shailene Woodley) have decided they are going to visit an interior designer they think may be Jane’s attacker. However when Madeleine tells Ed (Adam Scott) he stops her from going, which is fine because it turns out to be fruitless after all.

Madeleine is meeting with Joseph (Santiago Cabrera) her dishy play Director. Turns out that a year ago they both cheated on their spouses and he wants to discuss their relationship but she won’t. How do you just brush it off he’s asking, when they are in a collision with another car and her friends and family rush to her aid. Afterward Ed (Adam Scott) wants to know why she was in the car. She explains they were on their way to the theatre to discuss the opening and later, when visiting him in hospital, his wife challenges her and she leaves.

Perry is angry because his sons haven’t picked up their toys and so he blames Celeste…who is folding clean clothes, tells him to pick them up himself…if he doesn’t want to live in a pigsty and he beats her up yet again. Jane confides in Madeleine that she is worried the parents will find out that Ziggy is the result of rape. The headmaster is hiring an aid to watch both Ziggy and Amabella to find out who is bullying her.

Celeste is now covering her multiple bruises with make up. She is in a session with the therapist while Perry is away and finally admitting she’s trouble and that their lovemaking is tied up in anger. She wants to know why she came in today…. I don’t know…did something happen again she enquires?

We turn each other on rage…. I think it’s a problem says Celeste. The therapist asks her if the sex she has is violent…is she left with bruises… for reasons other than sex…. Does he grab you too hard? We have a volatile relationship…and she tries to tell her she’s not a victim…. What are you looking for from me…. for help… we know our relationship is toxic. Are you physically afraid of Perry and Celeste is all defensive, …you are treating us and demonising him.

Does he know you are here alone?

Does he hurt the children… have you ever been afraid you will die when he is hurting you… have you thought of leaving him…. Are there any weapons in your house… the questions continue?

What is profoundly right about your marriage; we are bound by everything we have been through. How does it impact on your sons? We never fight in front of them.

We should make a plan for the next time he hits you, she advises.

Jane has her gun and is hallucinating… she’s been smoking pot she’s feeling so desolate.

Celeste is driving to the school to pick up her boys to take them to the airport to meet their father and Madeleine is on the road, picking up Ziggy and Chloe. She is driving down the cliff road remembering being in bed with her director. Madeleine has Ziggy overnight and Jane is being picked up by the Police and given a ticket. She comes to pick up Ziggy who is asleep on Madeleine’s couch. Madeleine tells her to focus on the future and not the past and she will get through.

Madeleine’s ex Nathan (James Tupper) and Bonnie (Zoe Kravitz) are chatting, when Abigail (Kathryn Newton) comes to tell them she has nearly finished her passion project. She thanks her father for holding a dinner that her mother can come to.

Madeleine and Celeste are having a conversation when Perry comes to ravish her yet again. Jane discovers there is a petition circulating calling for Ziggy’s suspension. He is six says Jane pleading with Renata, we don’t know he’s a bully and she is so furious she assaults her

Madeleine tells her we won’t have you bulldozed out of Monterey. Jane is desperate to believe Ziggy’s father is a good person….

Celeste is back with the therapist, who advises her to get an apartment ready to run to… another life standing by if she needs it. Start documenting your injuries…. he has the ego to see this through Celeste she advises and paraphrases his lawyer trying to shock Celeste into action.

Jane comes to apologise to Renata as Amabella says Ziggy is a sweet boy. Although she refuses to talk about anything further. Ed brings Madeleine flowers, everyone is on the way to the play except Celeste and Perry who had wild sex, and he ended up in hospital stopping Celeste from going.

Lucky they have a permanent live in housekeeper. Prtty tells Celeste she is lucky he hasn’t killed her.

Tory asks Madeleine was she the woman her husband Joseph had an affair with and she denies it. Ed and she are driving home and when they get there he wants to know why they have reached a sexual plateau… he’s clearly unhappy about their relationship.

Nathan wants to kick Ed’s cultural arse and Bonnie tells him she’s very disappointed in his attitude. Abigail’s secret project is revealed; she is selling her virginity on the Internet for a good cause. Nathan comes to confront her… and she thinks somehow he would be proud of her. He’s in a rage, taking her computer away and he and Bonnie’s small daughter overhears and is in distress. Ed tells Madeleine he likes to pretend the is the lucky one, the winner as he wakes up with the girl of his dreams every day but is worried she doesn’t feel the same way. He doesn’t like feeling like the loser.

By the end of Episode 6 Renata had asked Jane would she allow Ziggy to come and play with Amabella, which should have raised her suspicion but oddly, didn’t.

Ed and Madeleine are dining with her first husband Nathan and his partner Bonnie at their house, although Abigail, Nathan and Madeleine’s daughter is absent when they toast not having killed each other. Nathan tells Madeleine about Abigail’s secret project, selling her virginity as a way of protesting sex slavery ensuring Madeleine overwrought with the news seeks out Abigail and tells her… f&^%$*! up doesn’t fix your life.

Ziggy is dancing for Jane he’s asked his mother about his Dad again, wanting to know where he is? Celeste tells Perry she is going out for dinner with Jane, but instead goes to her new flat to stand on the balcony overlooking the sea wondering what the future will bring.

The Australian Brandenburg Orchestra with Circa & Claire Laffiliatre is a unique collaboration & celebration of French Baroque music to move heart, mind & soul