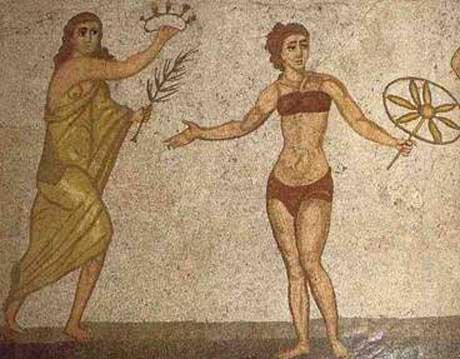 The Villa Romana del Casale on Sicily today is a UNESCO world heritage site, containing a collection of Roman mosaics that is considered one of the finest yet discovered. It was constructed, over the remains of an older villa, during the first quarter of the 4th century. It has been excavated on and off since it was re-discovered early in the nineteenth century, with most of the professional excavations being carried out post 1929.

This is a luxurious establishment, containing the finest set of mosaics yet found anywhere in the remains of the ancient Roman world. They are brilliantly conceived in a design sense. The quality of their execution is also second to none.

Archaeologists have determined that artists from North Africa were most likely employed to complete the works, based on the quality of their design skills and craftsmanship and the scenes that they depict. These encompass both mythological tales and scenes of contemporary life. Intriguing, and perhaps the best known of all these mosaics are the images of the so-called Bikini Girls, academically known as the “Coronation of the Winner” because they are performing in an athletic completion wearing what appears to be the ancient version of the bikini.

They are a group of 10 young women wearing what we would decribe as bikini-like outfits, short shorts with a separate band around their breasts, the forerunner of the bra. The girls in our ancient Roman villa are engaged in a number of activities, such as long jumping with weights in their hands, throwing discus, running and playing a form of handball.

One girl is wearing a transparent golden dress and holding a crown over the head of an athlete, while presenting her with a victory palm. Producing an image that has a depiction of a transparent garment in a design discipline fashioned from tiny stones pieces of colored glass, stone, or other materials, is nothing short of miraculouus.

But why bikini? In 1946 a two-piece swimsuit, the modern ‘bikini’ was re-introduced to the modern world by a French engineer Louis Réard, who had taken over running his mother’s lingerie boutique near the Folies Bergéres at Paris. This event happened within days of the first nuclear test on the ‘bikini atoll’ in the South Pacific, which meant the name of the island was in the news. It happened just weeks after Réard’s one-piece “Atome” was widely advertised as the “smallest bathing suit in the world”. And so it came to be said that his new two piece bathing suit ‘the bikini’ had ‘split the atom’. Bikini is also a catchy word and so it quickly caught on.

It was the patricians of Ancient Rome, who first established villa culture in a desire to enjoy the coveted pleasures of country life..

The Villa Romana del Cascale has no other parallels in the Roman world and covers an area of 4,000 square metres, built on a series of terraces with three major axes. In the bathing complex there is a frigiderium (cold room), a tepidarium (warm room) and it then opens out into a trio of calderia, or hot baths. In his villa in the countryside a man could relax, read the books of the ancients, sleep or rest as his mood dictated, while enjoying the excellent wine and fresh food of the region, in great abundance. The Roman Empire stretched all around the Mediterranean and by the 4th century villa complexes were sizeable agricultural estates and on the island of Sicily occupied much of the hinterland. While its inhabitants often celebrate the beauty of life, its rulers have always had a propensity to dominate. By the end of the third and beginning of the 4th century AD many other cultures had come and gone, including the Greeks, the Arabs, the Normans, the Spanish and the Romans. The Villa Romana del Cascale is at a place called Piazza Armerina. It is one of many built by important Romans, who withdrew to the country to administer their agricultural estates. It stands some 721 metres above sea level on one of Sicily’s spectacular sites with a view. Because it has baths in situ, latrines, a basilica or throne room, a series of rooms making up a huge bedchamber and was built on the grand scale similar to that of a palace complex, it is believed to be that of a rich landowner or possibly an emperor and it was built between 310 and 340.

The systems the Romans used for heating was by water in lead pipes brought from a natural spring nearby via an aqueduct. The pipes passed through an area where furnaces were kept lit at all times to warm the water, and in winter the floors.

The owner is thought to have been Maximian Heraclius, the emperor who governed Sicily at the end of the third century and beginning of the fourth century after the Christ event.

Like all Roman villas it has a main central courtyard with fountain and shrine, a single-story building, centered on the peristyle, around which almost all the main public and private rooms were organized. It is a large and rich site, offering the visitor spectacular views of the detailed mosaic floors. There are a myriad of faces of Roman men and women, including hunters, servants, actors, dancers, musicians and athletes. Also recorded are animals from all parts of the Roman empire of the time, both attacking and being attacked. The beauty and intricacies of the geometric and floral patterning of some of the floors is amazing.

Occupied until the Arab invasion of Sicily in the 9th century, the final act of destruction of the villa has been attributed to the Norman ruler of Sicily, William 1 the Bad, around 1155.

The Norman kings adopted the Byzantine tradition of mosaic decoration to enhance the somewhat dubious legality of their rule. The town still has ties with its Norman invaders, through its dialect. This is kind of Gallic Italian brought to the area by the Normans, who are still perceived as saviours of the Sicilian people because they ousted the Arabs from Sicily around 1060, and a subsequent influx of immigrants from Lombardy. Sicily is a place of great natural beauty, which is surrounded by the deep blue of the Tyrrhenian Sea. Along the southern Sicilian coast a wondrous Valley of Doric temples straddles a ridge, which is just south of the modern city of Agrigento.

You can visit Palermo to view the ancient Greek temple at Segesta. With an illusion of being straight, the size of its Doric columns and its perfect rectangular layout are all witness to the brilliant mathematical skills of its creators. Then there is the 2000-year-old Greek theatre at Taormina, where the experience comes complete with the theatricality of an erupting Mount Etna. 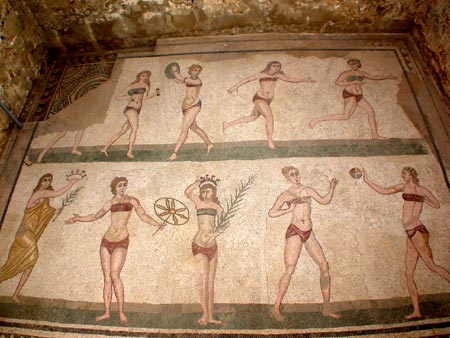 Sicily is a wonderful place, which appeals to all those who have an interest in archaeological and religious locations, beautiful scenery, delicious food and the company of people from different parts of the world, all of whom are curious about the ‘bikini girls’.