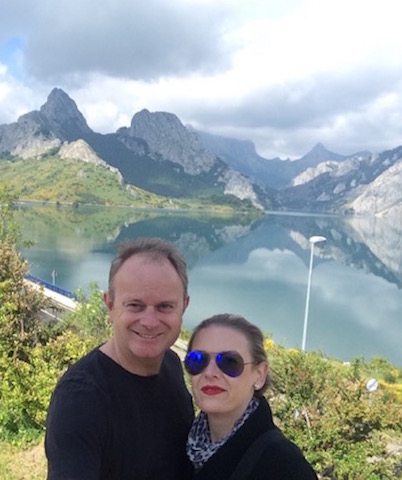 Now I know I was supposed to talk about Madrid this week, but I have decided to regale you with tales of the Basque country and leave the capital and largest city of Spain until last.

So here we go

The three last stops on our tour of glorious Spain would be the Basque region, specifically Vitoria Gasteiz, Bilbao and San Sebastian.

For many of you, the Basque capital Vitoria may not sound familiar.

What I can tell you is that once you’ve experienced the food in the city, it will be on your radar forever.

Bars groan at the weight of pintxos just begging to be tasted.

Our airbnb hosts in Vitoria have an excellent self-contained apartment and are incredibly knowledgeable about their city. Their apartment is in the perfect location, stones throw from the main square and mouth-watering eats.

It’s also a great spot to rent a car from and explore the La Rioja region, which is what we did.

I can highly recommend a tour of Vina Tondonia.  It’s a winery that has been in the same family since its inception. The Lopez de Heredia family has been making wines for three generations, a total of 131 years, and all from pure DOC Rioja grapes.

It is a fascinating insight to Spanish wine, which I do not know much about.

The tour, while not cheap at 60 euros per person, was excellent; our guide was so interesting and entertaining.

At the end we were invited to taste all the wines on offer and each received a bottle of the 2004 vintage to take home, which I might add is a superb drop.

Eating wise, we were also lucky that a friend is from this hidden gem that’s off the international tourist route.

That doesn’t mean there are no tourist, it’s just that the majority are Spanish and know about the delicious culinary experience it has to offer!

First stop for dinner is Sagartoki, and if you never want to leave this cider bar I wouldn’t blame you! We managed to nab a seat front row at the bar around 8pm.

This is early by Basque standards; so if it’s looking a little empty, don’t be put off.

In an hours time you’ll wish you’d gotten there earlier! The specialty of this pintxos bar is a dreamy little pillow designed for just one bite.

What are these little morsels of fabulousness?

Huevo Frito is the name.

We stayed in Vitoria two nights and it was our first stop both times.

Everywhere we ate in Vitoria was exceptionally good.

Tolono has a stunning selection of cold pintxos waiting to be tasted, while Bar Barron and Perretxico have treats that can be heated up or eaten cold. These bars are overflowing with locals who obviously know the right places to eat!

We decided to drive from Vitoria to Bilbao, with one night stop in Leon.

Driving through this part of the world is stunning, and we certainly have taken beautiful memories away with us.

First stop was the small medieval town of Frias.

Perched on a hill above the river Ebro, the castle dates between 12th and 15th century, while the bridge is 12th century.

It was truly gorgeous and worth a look.

Riano is a showstopper. Situated on a dam, the view here is like nothing I’ve ever experienced.

The only place that could come close is Lake Annecy in France.

The water is like glass and reflects the mountains perfectly. And to drive through Picos de Europa is a once in a lifetime experience!

The road winds up the Cantabrian Mountains, reaching the crescendo of Torre de Cerredo, at an altitude of 2650 metres.

Not for the faint hearted!

On our drive we actually were driving through cloud, which at first was exciting, then became rather hair raising.

Hairpin bends and zero visibility do not make a good combination!

On a clear day the vista would be unparalleled.

There is a cable car called Fuente De accessing views, but as it was cloudy, we decided it wasn’t worth it.

A shame really, but that’s nature, unpredictable and beautiful.

Leon is part of the famous pilgrimage Camino de Santiago, which makes it popular for local and international tourists alike.

We spent one night in the old town, which is filled with rich history and great tapas bars. A very pretty place.

Then it was Bilbao or bust! It has a charming, old world feel, while being home to one of the most contemporary buildings in the world, the Guggenheim.

Opened in October 1997, the Guggenheim Museum, designed by Frank Gehry is located on an old dock and wood warehouse.

The building is arguably a great work of art in it’s own right.

Beautifully designed, it is a feat in the use of light and space, truly an amazing gallery to experience.

To access excellent views of Bilbao, make sure you take the funicular up to Mount Artxanda. You’ll get some fabulous photos at the top.

The old town is lovely to explore, and a stroll down the main street is highly enjoyable.

And the food again doesn’t disappoint.

It was then an easy bus ride to our next and final stop in Spain, San Sebastian.

Famous for its beaches and surfing, it is also renowned for its culinary prowess.

You haven’t eaten till you’ve experienced San Sebastian, and my lord it’s heavenly! It has a reputation for being the gastronomy capital and it doesn’t disappoint.

You seriously need two stomachs for this town.

The pintxos, especially the hot pintxos is some of the best in all of Spain.

Topped with an array of yumminess, they are usually around 2 euro per piece and are very generous. The Basques are famed fishermen, so aptly there is a strong seafood slant.

The majority of bars are in the old town, and the best thing to do is to partake in a few dishes at each venue.

Hot pintxos usually arrives on a small plate and is the perfect portion size so that you can order many different dishes to share.

We were wowed by veal cheeks, pork ribs in a curry rub, scallops wrapped in bacon with a salsa Verde and their version of risotto made with the local sheep milk cheese, just to name a few. Needless to say, we didn’t go hungry in this beachside city.

A stunning lunch was had at nearby Getaria, this fishing village 23 kms from San Sebastian was the birthplace of Cristobal Balenciaga.

One of Spain’s most innovative couturiers, the town has a dedicated museum to this genius of the cloth.

After a visit to the Balenciaga Museum (but that’s another post), we settled in to Kaia Kai-Pe where we enjoyed a simple tomato salad, freshly grilled prawns and a whole sea bass, cooked on the asado.

A tasty amuse bouche of Bacalao was a great way to start.

It was a fabulous long lunch with views of the sea.

Definitely worth the visit.

If you find yourself in San Sebastian, I would recommend a ride on the funicular, like Bilbao, to take in the most breathtaking views.

We also enjoyed a morning on the beach. But beware; it’s the North Atlantic and a tad cold at the beginning of the season. It also boasts very strong surf making it popular for board riders from around the world.

If possible, if you can time your visit away from the weekends, as it seems to have an influx of tourists enjoying a quick jaunt away.

We were there Wednesday, Thursday and Friday nights. Friday was much busier, and had a different feel in the streets. Still, we enjoyed every minute spent and every bite of food taken and were sad to be finishing our adventures here.

So it’s not over yet, in Fashion Elixir at least!

I hope you join me next week for my final installment on our Spanish adventure, the capital Madrid.

Play our Interactive Quiz and expand your knowledge of the evolution of architectural design styles, including Palladian, Gothic, Neoclassic, Baroque and more