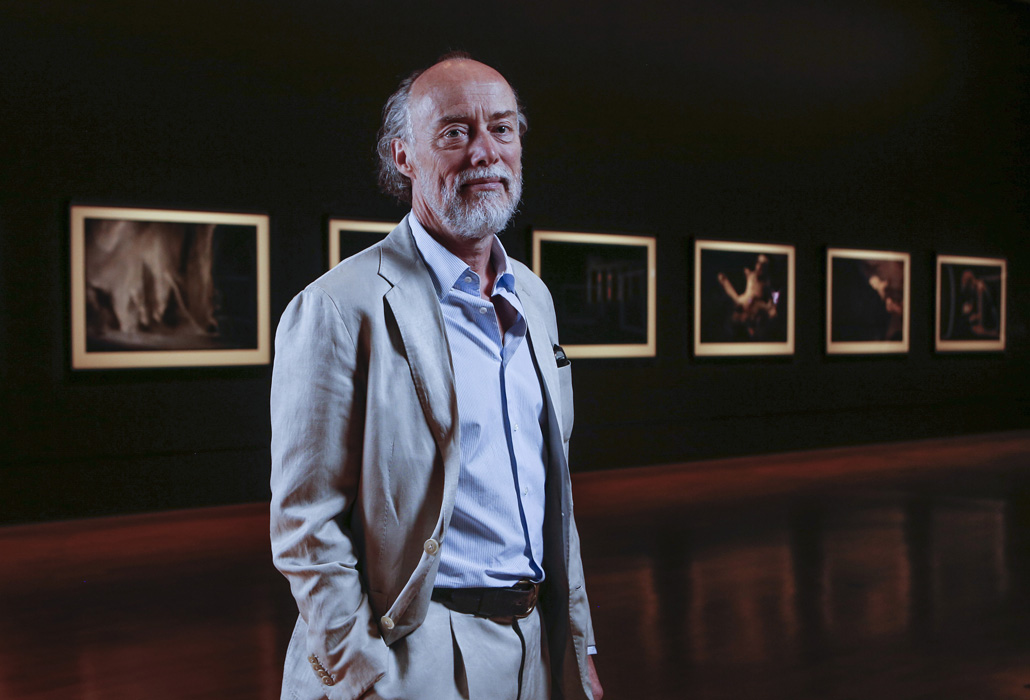 Melbourne photographic artist Bill Henson is showcasing recent works (2008 – 2011) with a major solo exhibition that boldly begins the NGV Festival of Photography, the largest display of contemporary photography in the gallery’s history and the first since the institution opened its doors in 1967. Bill Henson the show is now on display at NGV International, 180 St Kilda Road, Melbourne, Australia until August 27, 2017. Dramatically installed, it features powerful images exploring the complexities of the human condition through twenty-three photographs. The immediate impression they give as you walk in the door is that genius abounds.

Bill Henson seemingly adores light, which not only characterizes and differentiates a subject but also has the ability to distinguish and exalt it, whether it’s flickering through a cloud bathed in the pink rays of the sun as it sets, when dramatically creating an transcendent effect in one of his landscapes, or revealing the beauty of form in a classical sculpture. ‘The NGV mounted Bill Henson’s first solo exhibition in 1975 when Henson was only 19. Over forty years later, audiences to the NGV will be captivated by the beauty of Henson’s images once more,’ said Tony Ellwood, Director, NGV. Today “Henson’s photographs have a palpable sense of the cinematic and together they form a powerful and enigmatic visual statement,” he said. They certainly do that.

The NGV’s Photography Department was the first of its kind in an Australian institution and over the years since it was established, has gained a powerful reputation for harnessing both vision and energy. Subjects range from landscapes to portraiture, as well as classical sculpture captured in museum settings. The show is all about encouraging critical thinking and inspiring Melbourne’s contemporary art community to resist the temptation to generalise with what they do and to keep art and photography alive and relevant to the contemporary experience.

His work has always created controversy and for some, discomfort as he deals with documenting human ideas surrounding beauty. When I think about ‘art’ per se I always remember the first line (translation by H. Rackham) of Book 1 of Aristotle’s ethics, which says “Every art and every investigation, and likewise every practical pursuit or undertaking, seems to aim at some good: hence it has been well said that the Good is at which all things aim.” By the early twentieth photography had been accepted into the western art world as a distinctive form of individual and artistic expression. We seldom realise the extent to which it has influenced our own cultural growth.

Iconic photographs such as Max Dupain’s Sunbaker 1937 shaped an image of Australia abroad for 50 years as a nation of deeply sunburned muscle bound beautiful men. A culture demonstrates its concern by striving to achieve excellence in the arts, letters, manners, scholarly, professional and personal pursuits and these exciting and captivating new images from Bill Henson speak volumes about his subjects, such as the lonely and forlorn sculpture of a young boy from antiquity, who seems to be pondering how or why he has become an integral part of modern mythology. Henson has surrounded his youthful subject in a silky black, as if he is emerging from a long suspension in time, perhaps caked in ash from a long forgotten volcanic eruption, one that covered him and froze him in time. His fate to be found later by those who would after centuries of going backward to imagine the future, would appreciate his form and beauty; in this respect the boy is like a ray of light himself as he emerges from the darkness into the light to once again bring joy to those around him.

Arts and creative industries in Australia have built worldwide reputations for innovation, talent and energy.

Creative people working in all fields of endeavour inspire discussion about national identity. Bill Henson’s wonderful works invite viewers, to engage with them one on one basis so they can decide for themselves where they go way beyond being just a photograph and become true art. The exhibition is a vibrant and exciting display.

In the sixteenth pilgrims traveled around Europe and Greece in search of the ‘plants of the ancients’. It was at this time the European plant world began to change with the introduction of oriental bulbs. At this time the science of botany also broke away from medicine, to which it…