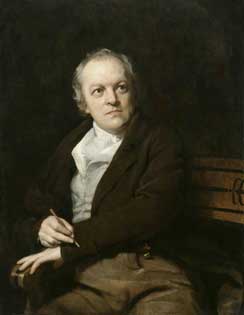 William Blake (1757-1827) expressed an ardent belief in the freedom of the imagination through his poetry and striking symbolic paintings. He rejected traditional composition and his ideas of perspective evoked an enigmatic otherworldliness. His poems reflect a uniquely personal mystical vision one in which imagination and reality become one. He believed the spiritual was far more important than the material world, and that the true artist is a prophet because he or she is given divine insight. Thomas Phillips’s portrait of Blake aged 50 depicts him in an awkward pose suggesting latent energy. The eyes are fixed on some transcendent reality. As an engraver, painter, poet, visionary and prophet of the modern age Blake is perhaps one of the most distinctive of all English romantics. He was all at once astonishingly original and yet deeply grounded in the radical dissenting tradition from which he came.