Lanford Wilson is a highly acclaimed American playwright winning the 1980 Pulitzer Prize for Drama for his play Talley’s Folly. He has continued to write plays into the twenty first century.

“A significant addition to the Lanford Wilson cannon … his best work since ‘5th of July’ … Book of Days manages to combine Wilson’s signature character-based whimsy with an atypically strong narrative book and politically charged underpinnings” wrote Chris Jones for Variety.

I was delighted to attend the Australian premier performance of Book of Days at the New Theatre, Newtown.

This an exciting hub of cuisine, culture and fashion in the inner western suburb of the city of Sydney. It is one of the oldest theatre companies continuously running productions in Australia. It was established in October 1932.

A tree growing center stage cast shadows amongst the scattered folded chairs with a simple black bar fence to left of stage. Georgia Hopkins, the Set Designer created the town of Dublin, Missouri in a minimalist and engaging style.

The simplicity of the very effective stark set design has been enhanced by perceptive and stylish lighting created by Lighting Designer, Alex Berlage. The Musical Director, Cassady Maddox has been very effective in supporting the casts’ choral performances. The stage at the New Theatre is wide and deep and every seat has a clear view of the action on stage.

Consequently warm, inviting and intimate viewing in terms of cast connecting with the audience is evident in a way that not many theatres achieve.

The Director, Elsie Edgerton-Till’s blocking and movement of characters across and around the stage is extremely impressive.

She has sensitively adhered to Lanford Wilson’s well constructed play and taken it to a level that honours the playwright’s intention.

Elise has directed the play with integrity and a very studied and meticulous approach.

The actors in the play also narrate the story within the play. The performers are expertly assembled and reassembled to create ever-changing vignettes.

They deliver superb characterizations of the inhabitants of Dublin, Missouri.

We are introduced to the residents of the small town of Dublin with a light, comical and gentle approach.

The town is dominated by a cheese plant, a fundamentalist church and a community theatre. 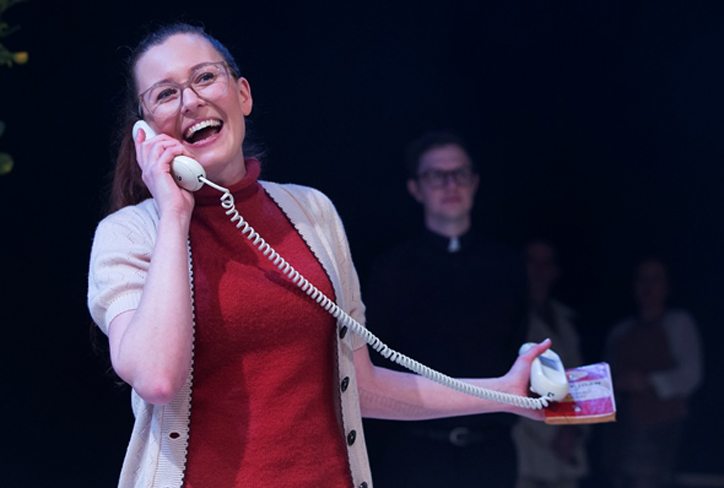 At the beginning of the play Ruth is auditioning for a role in the production of George Bernard Shaw’s, Saint Joan. Boyd Middleton [Geoff Sirmai] a guest director from Hollywood and on the run for various suspected financial and criminal misdemeanors casts Ruth as Joan.

Lanford builds upon a play within a play and also makes reference to Walt Whitman’s poetry.

The themes of the threat of the religious right and the corruption of politics begin to emerge as the audience is introduced to other members of the community including Reverend Bobby Graves [Kyle Walmsley] and James Bates [Simon Davey]. The mood of the play changes as news of the violent and mysterious death of the cheese plant owner and most influential member of the community unravels.

Ruth is uneasy about the death of Walt Bates and the threat to her husband Len’s [Alex Norton] dream of turning the cheese plant into a gourmet cheese factory.

Len’s eloquence about his passion for cheese was very convincing and I felt the audiences’ taste buds would have been ignited. They were very touching and convincing moments in his performance.

Ruth is compelled to act as she smells ‘a rat’ and she begins her campaign for justice. Her actions and commitments are mirroring those of the character of Joan of Arc.

Ruth is the catalyst for further investigation bravely challenging the Sheriff [Joel Spreadborough] and the town people’s complacency. She courageously pits herself against James Bates the murdered victim’s son and now licentious, greedy and ruthless new owner of the cheese plant.

Her determination and commitment to uncovering the truth are character traits that evolve from within herself as well as being the conduit for Joan’s brave intentions. The play explores the corruption and misplaced power within religion, the complacency and naivety of the local townsfolk and the ambitious incessant seeking of political power that is devoid of empathy and justice.

As the play is developed the moral deterioration and disintegration within the townsfolk of Dublin, Missouri is an alarming realization for the audience.

It is thought provoking and invites the audience to question their own stance on issues, their willingness to support their convictions and challenge or maintain a commitment to the status quo.

It is not surprising that Book of Days won the Best Play Award for the American Critics Association in 1999.

It illuminated deep issues with a compassion and concern that resonated with the audience. The play captivated the viewers through its inspirational directing, fine performances and the professional effort of the creative team behind the scenes.

Theatre of this calibre is rewarding and enriching. It has stimulated reflection and discussion long after the performance.

All images: Courtesy of artists and the New Theatre, Sydney NIDA: National Institute Dramatic Art turning 60 in 2019, have extended enrollments to 31 October 2018, for those with a passion for a career in performance art