Detail, the diversions of court life amid the seasonal work of the country. From Les Trés Riches Heures du Duc de Berry, published 1969 reproduced from the illuminated manuscript belonging to the Musée Condé Chantilly, France

Paris the largest city in Europe, by the 12th century, had gained a fortress, which was built along the banks of the River Seine to the west of the city. It became known as le Louvre, deriving from a Frankish word meaning fortified place.

This was at a time when French nobles were busy establishing their own power bases, building chateaux in the Loire valley, which was a most desirable piece of countryside famed for its fertility and mild climate, and resisting the collection of taxes constantly challenging the King. Do you know the region known as the garden of France, where you breathe pure air amidst verdant plains watered by a great river?

If you have travelled through the beautiful landscape of Touraine during the summer months you will have followed the tranquil Loire for a long time. You may found your good self, as I was, entirely enchanted, unable to decide on which of its two banks you would choose to live with a loved one, forgetting the rest of mankind. The name France derived from the Latin Francia, literally meaning land of the Franks, which its people were known as from the ascension of Hugh Capet first King of France in 987 and throughout the Middle Ages.

By the middle of the 14th century cross-cultural influences would forever transform society and as they grew in stature artisans emerged from anonymity to become artists – celebrities signing their works.

Wealthy French connoisseur and collector Jean Duc du de Berry (1340-1416) was the third son of King John II of France and Bonne of Luxembourg is best remembered for amassing a fabulous collection, which included Oriental textiles, Persian miniatures, and cameos from antiquity, illuminated manuscripts and medals.

Today ‘The Book of Hours’ he commissioned, Le Trés Riches Heures du Duc de Berry is a wonderful literary source for representations of architecture, gardens and society from the late Middle Ages to the Renaissance.

It is considered an important cultural artifact and was left only half completed when he died. When completed it disappeared from history until 1856, when an Italian family sold it to the museum at Chantilly. 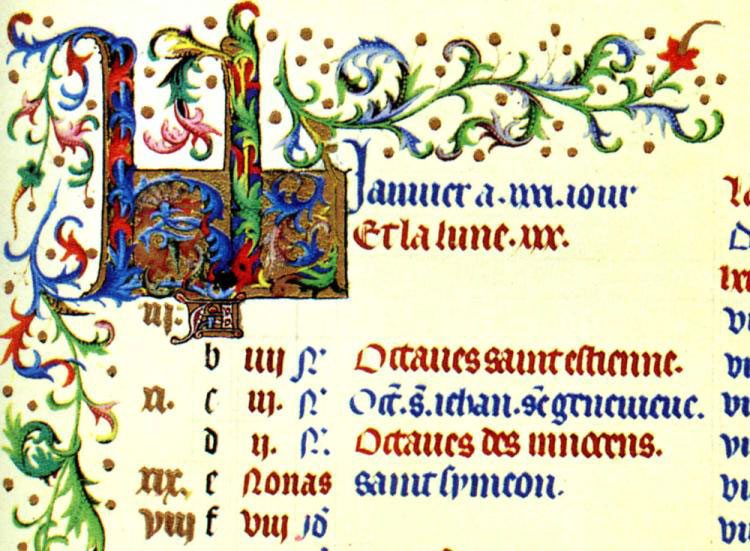 Its pages and pages of glorious illumination informs the books sacred stories.

Books of Hours were quite literally books of the ‘painted prayers’, which were appointed for various hours of the day, based on monastic practice. For 300 years they were best sellers.

Some of the most appealing images we have of the exteriors and life in the early chateaux of France are recorded in the illuminations contained in the very rich hours of Jean, Duke of Berry. The Limbourg brothers, Paul, Hermann and Jean came from what we now know as Flanders, and it was they who produced the Duc de Berry’s unique devotional book containing a collection of texts, prayers and psalms in a style popular throughout the Middle Ages. Very little is known about the brothers personally but we do know it was in 1408 they entered the service of Jean, Duc de Berry one of France’s greatest connoisseurs ever of the visual arts.

They used a wide variety of colours obtained from minerals, plants or chemicals mixed with either Arabic or tragacinth gum to provide a binder for the paint.

Among the more unusual colours they used were vert de flambé, a green obtained from crushed flowers and an ultramarine made from crushed Middle Eastern lapis lazuli, which was used to paint the brilliant blues. The fine detail, which characterizes their work, needed extremely fine brushes and, almost certainly, glass lenses which were in their infancy of development at that time.

In the book each colourful illustration is surmounted with its appropriate hemisphere showing a solar chariot, the signs and degrees of the zodiac and numbering the days of the month and metrological letters for the ecclesiastic lunar calendar.

Anatomical man, is an illustration that reveals the influence of the zodiacal stars on the human body Variegated brickwork is a great feature of some of the chateaux of France and in the sunlight they resemble a marvelous mosaic.

It was the red ‘brique’ of France that English crusaders took home with them to become a great feature of English houses as well.

A contemporary quote says ‘why deprive ourselves of the use of enamelled terracotta in our palaces and chateaux, always furnishing their exteriors with…stone that looks chilly and dismal…’.

Architects did not deny themselves the use of all the great resources of the Loire region and they respected stone enough not to treat it wastefully.

The Duke, accompanied by his servants, chaplain, and artists moved constantly between the seventeen or more palaces, châteaux, hotels or private mansions he owned, some of which are depicted in his now renowned Book of Hours.

The Page September depicts the Château de Saumur as it looked in 1410 when it was renowned for its light and elegant architecture. The Duc had a particular fondness for jewels, works of art and exotic animals and he owned rubies that weighed 240 carats, a collection of ostriches and camels and a magnificent collection of books.

He owned astronomical treatises and a large number of religious books including some 14 Bibles, 16 psalters, 18 breviaries, 6 missals and no less than 15 Books of Hours. Jean Duc de Berry was indeed one of the most influential of all the nobles in the late fourteenth and early fifteenth centuries in France.

He reputedly died in 1416 broken-hearted at the destruction of the French monarchy at Agincourt the previous year.

The Limbourg brothers, who executed several other pieces of work apart from the Duke’s splendid book of hours, also died in 1416 before the age of thirty, apparently killed by an epidemic. Le Trés Riches Heures du Duc de Berry remains as a testament to history and about our how our attitudes and philosophies, fashions and passions rule our lives.

With a cascade of silver stars raining down as if were at the ‘last night of the Proms’, Heavenly Handel at Brisbane Baroque sent us out with hope in our hearts