Actor Dustin Hoffman surrounded by some of the members of the American Boychoir.

Canadian director Francois Girard is becoming renowned for films with a theme of classical music. In his latest work Boychoir he provides an image of a boy prodigy, who if he is to succeed in life and the art of music needs to first triumph over adversity and learn to respect himself and others.

You cannot give birth to beauty however, without pain, a maxim that it seems for many is hard in learning. Stet an 11 year old is on the threshold of manhood. He is struggling against all the odds stacked against him personally.

Classical music is the one thing in life Stet responds to. It gives him both a connection and purpose, steadying him with its glorious rhythms, marvellous harmonies and sounds of unparalleled intensity. Born of an exciting free imagination classical music achieved a complete medium of expression and highest pinnacle of achievement in a climate seldom granted to any other generation during the 18th century. When we meet him Stet is at a public school, low down the scale in terms of parent participation in a poor neighbourhood. He is rebellious, disturbed much of the time and completely anti social.

His studies are affected, but it is easy to see he’s a sensitive boy with a bright mind and capable of very much more.

His Headmistress played with great sincerity by Debra Winger does, and she believes he is especially gifted and wants to help him so that he can have a future.

She persistently petitions the American Boychoir to come to the school and perform hoping to inspire her students while providing an opportunity for her to place Stet in front of its legendary Conductor Master Carvelle played by Dustin Hoffman. 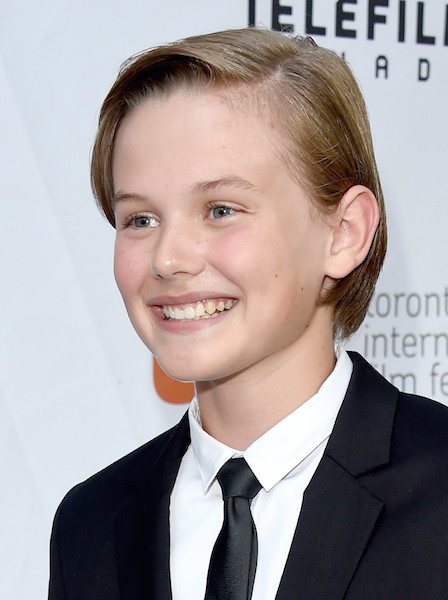 Garrett Wareing, featuring in Boychoir, at the premiere in Toronto

Embarrassed when unaware of what she has done for him she asks him to sing solo for the Master he turns and runs out of the audition, seeking safety and security at home.

There he finds his mother in her usual terrible state. She has spent most of her day drinking herself into oblivion, so she doesn’t have to face the harsh realities of her life without anyone to support her.

The many disappointments of her life have dragged her down.

Stet has had to mostly look after himself for some years, so is wiser in some ways than his age but inexperienced in others.

He has to help to clean her up each day when he comes home from school, hoping to get her back on her feet and to work.

Sometimes he succeeds, other time he doesn’t. It is no sort of life for any young child to live.

All his efforts however come to no avail, when a few days after we meet him as he is walking home from school he comes upon her lying crushed under her car in an accident that takes her from him.

His father whom he has never met turns up in the cemetery on the day of her funeral summoned by his caring Headmistress.

She still believes that if the kid just caught a break he would surprise everyone. Basically she blackmails his father into taking him to the choir school, considered the best in the USA to see if he can get him admitted.

Stet by now realises he is out of options and endeavours to sing well to please the master’s, but it is not enough.

They can sense the boy is trouble and don’t want their perfect world disturbed, especially as they recognise him as the kid who walked out on the privileged audtion provided. Stet’s father played by Josh Lucas also has a perfect life living in New York with his wife and two daughters and is both embarrassed and mortified his ‘secret’ son may come to light, so he takes up his challenge.

Dad is overwhelmed by his son’s seeming musical talent when Stet sings for the master’s. Not short of a bob or two, he basically bribes them all and the school Principal played by Academy award winning actor Kathy Bates. The Principal is burdened by her duties, having to manage the over inflated ego’s belonging to her ‘music masters’, as well as the many challenges of dealing with pre-pubescent boys. She responds to the ‘donation’ and says she will admit Stet. Money does speak louder than words. Dustin Hoffman and the boys in Boychoir

The career of any young male singer who has been chosen to attend the school, because he is considered a ‘master of music’, is all too fleeting. One or two years singing at the top of their game is all they can expect, before their voice breaks.

The American Boychoir School in New Jersey is a real institution, following an ancient tradition established in Cathedrals throughout Europe and in England, towards the end of the Middle Ages. This means talented young singers (could be wizards) live in and eat, sleep and learn their music craft so they would be able to concentrate on the music and give the best performances possible when singing in choir.

The chapel of the school where they sing has a superb acoustic, which entirely mesmerizes Stet who keeps sneaking in so he can sing within its walls.

Greatly privileged and leading a life with the boys at the school is far removed from his previous life and he’s all at sea as he struggles to find his place.

The boys enjoy travelling too not only within America, but also overseas. They are a close-knit group and it takes a while for Stet to gain any sort of respect from a select few. Having a talent for breaking into vending machines helps.

Devon is the lead singer of the group and takes an instant dislike to the new arrival, sensing he just may have a rival for his solo crown. He stoops to underhand tactics designed to embarrass his rival publicly.

The masters include their resident conductor and genius Master Carvelle, played by a restrained Dustin Hoffman who seeks to give gravitas to his role. Eddie Izzard as Drake and Joe West as Devon in Boychoir, Photography By Myles Aronowitz Stet finds that he has a champion in another master Wooly, played by Kevin McHale who does his best to encourage his young prodigy.

Stet spends Christmas alone in the school when everyone leaves because he has nowhere to go – although the teachers all believe he has gone to stay with his father.

In the meantime he has persuaded one of the boys to teach him how to read music before he leaves, because up until the point he came there he had only learned music by ear.

He’s a quick study and by the time they all return, he is well versed in his lessons. 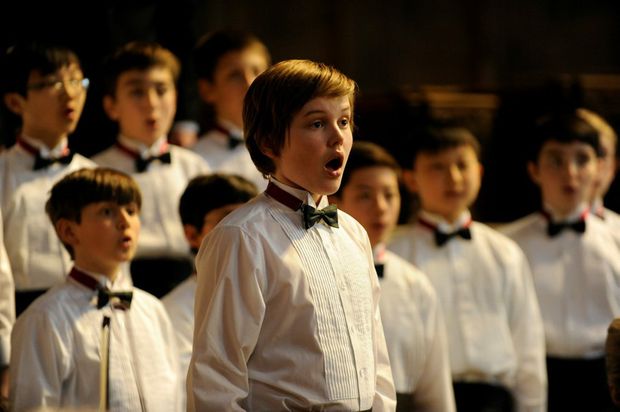 Garrett Wareing as Stet in Boychoir

Stet has used his time well, catching up while stealing food from the canteen or  vending machine to keep him going.

He proves himself at practice by picking up a deliberate mistake when Master Carvelle plays a series of chords on the piano to test his pupils.

Stet is the only boy to catch him out and it is at this point Carvelle begins to take real interest.

Stet now has a rockier road to hoe, teased by his room mate, and some of the other boys. They take ‘Devon’s side as he now also realises his time at the top is coming to an end.

He breaks into the school office gaining access to Stet’s personal file, which reveals his mother as a drunk who was arrested. Devon copies her wrap sheet and pins up the images for all the other boys to see.

Stet does not react well, and takes Devon down. Brawling is one rule the boys cannot break and he faces a hearing and dismissal with the headmistress determined to put him out.

However Master Carvelle has other ideas. He has questioned Devon and discovered the real reason for the ‘best student he has ever taught’, acting in such a way.

When Stet’s father comes to remove him to send him to boarding school in Europe he blackmails him as well so he can keep Stet at the school . Garrett Wareing as stet in Boychoir

By now he knows Stet is the only hope his school has of winning a prestigious award the choir have all been chasing for years, allowing them to sing in the Cathedral in New York.

Boychoir is a movie that is in many ways predictable, with great empathy and sparseness of style to its credit it resists setting the emotions to run too high. Garrett Wareing proves with this performance he is a promising young acting newcomer.

Stet’s previously disadvantaged background and difficulties with the other students in the school need to be surmounted so that he can find the purity of his voice. Wareing does it with both sensitivity and style.

Stet’s father comes and stands at the back of the Cathedral to witness his son’s extraordinary solo moment. It makes him realise that he has to come to terms with his own responsibility towards him and tell his wife about the son he’s now bursting with pride for.

To say the music performed throughout this small gem is glorious is an understatement. Mostly composed by George Friderich Handel (1685-1759) who designed his music for popular appeal, the clarity of sound of the American Boychoir is truly extraordinary.

Completely uplifting, just superb heavenly young voices the singing alone leaves you with a warm all over afterglow.

Stet’s goal to give his heavenly voice as a glorious gift in the highest-profile performance his school has ever given in New York is achieved. He reaches that pinnacle of achievement and perfection – High D, before his voice breaks just days later.

Stet leaves the school with his father and stepmother to start a new life clutching master Carvelle’s first and only reference to help his career path, given to his ‘best ever student’.