Australian artist Brett Whiteley (1939-1992) constantly explored Nature, and the nature of things. His studio gallery is one of Sydney’s seemingly best kept secrets. Since 1995 it has been managed as a museum by the Art Gallery of NSW. Currently it is getting ready for a new show starting on the 4th October, on view until May 2014.  A larger than life character, Whiteley twice winner of the famed Archibald Prize strode the whole of the ’70’s and 80’s in Sydney influencing other artists and being influenced by such luminaries as French painter Henri Matisse. 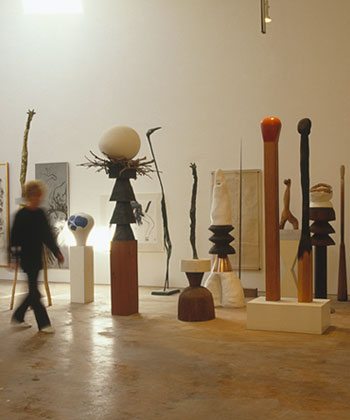 He was not restrained in any way and had an international reputation for his abstract, fluidity of style one that became more complex as he progressed. His personal lifestyle was to say the least, challenging on every level. His art however has endured and today his reputation for producing avant garde and pioneering works intact. His landscapes challenged everyone’s perceptions of the countryside. Our indigenous cultural heritage played a significant part in Whiteley`s art, along with its unique flora and fauna. His work To Yirrawalla 1972 is a tribute to Yirawala, the artist and Aboriginal elder of the Kuninjku people in Arnhem Land. Whiteley had viewed his bark paintings and met the artist in Sydney in 1971. He was inspired by both Asian Art from many different cultures and the landscape tradition from England and Europe. He admired Zen philosophy through which a process of flow and focus was expressed in the act of drawing and painting. He re-imagined the contemporary landscape like no other. He studied Chinese calligraphy, brush and ink drawings, the French connection and the Japanese influence on Monet, Matisse and van Gogh. Then there was his exploration of Indonesian and Islamic art as well as the influence of artists such as Lloyd Rees, Bill Brandt and Richard Diebenkorn, all influences that provide a rich contextual platform for understanding Whiteley and his works.

Myron, Polykleitos and Lysippus to Michelangelo, Bernini, Canova, Rodin and Moore how do you choose a dozen or so works of sculpture that have rocked your world