How valiant Leo Schofield and Jarrod Carland were as they distributed their announcement to all those who had supported the festival over the past two years. ‘

“… Mr Hodgman and his advisers did not even have the simple courtesy to tell Leo Schofield that his funding request was being rejected and that his festival, therefore, was dead”.  He had to find out from a journalist” 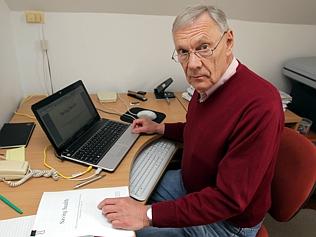 Here is the brief life and swift death of Hobart Baroque, for your consideration…

Hobart was the obvious place. Anyone who knows how to run arts festivals also knows they work best in a city that is big enough to support them but small enough for the event not to be dwarfed by other things.

Sydney is too big, Bendigo too small. Hobart’s just right.

And anyone who knows about the classical music business also knows that baroque music, written in that revolutionary time between 1600 and 1750, is the only growth area in the whole classical scene.

The nineteenth-century romantic repertoire, with its vast oversupply of lavish symphony orchestras, is struggling, with ageing audiences and declining interest. But there is a Baroque boom in recordings and ticket sales, and a massive shortage of live performances, particularly in Asia and the Pacific.

For a decade, Leo Schofield AM, the most successful and experienced festival director in the country, dreamed of a baroque festival in Hobart’s heritage buildings, centred on the historic Theatre Royal.

There was a meagre $200,000 from the state government, so they had to put in their own money to make it happen. The highlight was an opera performance from the Royal Opera, Covent Garden. But it was a tiny festival, a toe in the water. The next time, it again nearly didn’t happen. The former Premier and Arts Minister, Lara Giddings, finally offered $400,000 instead of the $600,000 they had asked for, and which was the minimum needed to cover costs. And the funding promise came late, leaving only six months to organize a complete festival.

Even if the full request had been granted, it would have amounted to much less than a tenth of the amount given to major mainland festivals by their state governments. Even the troubled Sydney Festival this year got $1.7 million from the Sydney City Council alone.

But once again, rather than seeing Hobart Baroque die, Schofield and Carland made up the gap with their own money, with again no hope of getting their money back. Over the two years, they put in around $150,000 of their own money, as well as a vast, unrelenting and unpaid workload. It amounted to a substantial and entirely unsustainable subsidy for the Tasmanian government.

Leo Schofield and Jarrod Carland are reasonably well-off but far, far from rich. To continue such a subsidy would drive them both into bankruptcy. It could not go on this way.

Competition – WIN TICKETS to the Conservatorium Theatre, at Brisbane Wednesday 10 June at 7pm when cellist, author and acclaimed musical explorer Steven Isserlis will convey his enthusiasm for the cello and its marvellous sounds, directly to every listener. Joined by a brilliant young Canadian pianist Connie Shih, the duo…