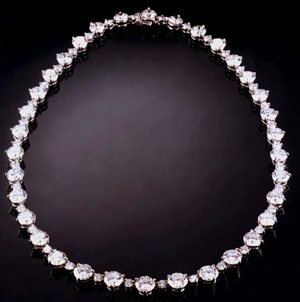 George IV was the last of the Hanoverian Georgian Kings and gave an impressive diamond riviére to his mistress Elizabeth, Lady Conyngham, who reputedly received gifts of jewels valued at the time in the region of 80,000 pounds. Jewellers in the early nineteenth century were realizing the importance of light to the brilliance of diamonds, setting them in open collets or claws. From this period on brilliant cut diamonds were set in open mounts, although smaller stones or rose diamonds were set in closed mounts for some time. Throughout the century, and with very few exceptions, diamond jewels were mounted in a laminate of gold and silver; silver at the front to enhance the whiteness of the stones and gold at the back to make the jewel more solid and to prevent the staining of skin or clothing. Only a small number of diamond jewels of this quality survive in their original closed settings. This remained the case until the gold discoveries of the 1840’s in the United states of America, later in South Africa, and the first appearance on the market of Cape diamonds in the 1870’s. Almost all precious jewelery sooner or later had to be remounted. This stopped once a regular flow of diamonds from South Africa, and the abundance of precious metal on the market had been established, dovetailing perfectly with a new and widely spread wealth as a result of the growing industrial revolution. This meant an ability to purchase diamond chandelier earrings weighing 9.00 carats that cascaded from the ear in delightful pagoda shapes.