At Brisbane during the Brisbane Baroque Festival to be held 10 – 18th April, 2015, there is a sumptuous program of glorious music on offer in key venues across the city.

Seventeenth century English composer Henry Purcell’s delightful and only true opera Dido and Aeneas takes little more than an hour to perform, but it will be sure to ‘banish sorrow’ and ‘shake the cloud from off your brow’.

Baroque music united all that this virtuoso era offered, especially when musical melody was exploited by the human voice in powerful performances of sensuous beauty and soaring vitality. He started his career in music as a chorister in the Chapel Royal during the restoration and reign of Charles II (1630 – 1685).

Purcell with great creativity exploited the possibilities of poetic expression and orchestral colour and he combined brilliantly philosophical thought and musical aesthetics to render and translate into music the passions, preferences and affections of modern man.

During his all too short life he provided a number of verse anthems and full anthems for the liturgy of the Church of England with sublime settings of the Morning and Evening Service, the Magnificat and Nunc dimittis, Te Deum and Jubilate.

One of the greatest and most rewarding joys of my life has been singing these sublime sacred works to his music in choir.

He also wrote in a wide variety of musical forms ranging from miniature pieces for harpsichord to large-scale works for the court and the theatre, although his genius as a composer for the stage was hampered by there being no public opera in London during his lifetime.

His earliest surviving compositions date from 1680 his theatre music, in particular, made his name familiar to many who knew nothing of his church music or the songs he wrote for the court. Indeed one of the most important musical developments in Restoration London was the gradual establishment of regular public concert.

Presenting this masterpiece in concertante form under the magnificent dome of Brisbane’s City Hall, will be a cast of youthful Australian artists, featuring some of Australia’s finest emerging young soloists, members of Brisbane’s Canticum Chamber Choir

Accompanied by the splendid Orchestra of the Antipodes, whose musicians play on original instruments and led by Brisbane Baroque’s Music Director, Erin Helyard, Dido and Aeneas will be a highlight of this year’s festival

Henry Purcell is believed to have written this semi-opera Dido and Aeneas (libretto by Nahum Tate) for performance at a girls’ school in Chelsea in 1689 after a love story in Virgil’s epic poem Aeneid (19 BC). This wonderful work was composed at a time when stories from mythology were all the rage.

There is also a mention or two that it may have been produced for an earlier private masque, although no documentation has turned up to support that theory. However it has to be said, that in style this lovely piece certainly seems as if it would have easily been a masque. 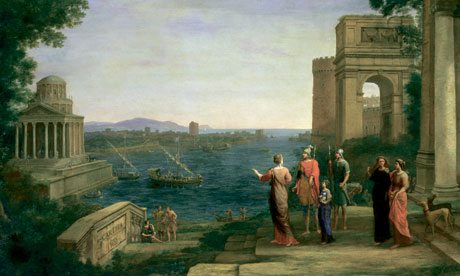 Dido and Aeneas at Carthage by Claude Lorraine

A diversion of noble amateurs, the masque was a lavish experience of mythological or allegorical subjects that included poetry, voice, instruments, dance, actors, costume pageantry and scenic decoration. Indeed it was out of the English masque the traditions around English opera evolved, be it a very fine line between them. These wonderful entertainments were presented often by family, friends and a selection of household gentlemen and gentlewomen in the great chambers of grand houses, as well as for royalty by members of the court.

This happened early in the seventeenth century when attitude demanded that acting in plays was considered socially demeaning.

France’s King Louis XIV (1638-1715) however came along and changed all that and by the second half of the seventeenth century he had personally ensured that theatrical entertainments became popular at Versailles.

His court style was admired all over Europe and in England especially after Charles II was restored to the throne in 1660. He had spent so much time in France he ensured the all new opera became the rage.

This piece features the legendary Queen of Carthage, Dido, and the Trojan refugee prince, Aeneas.

He and his crew are shipwrecked in Carthage and he and the Queen fall in love. However, witches abound in the kingdom, and they are determined to bring the pair down.

So they have one of their ‘coven’ impersonate the God Mercury, the messenger of the Gods, to lure Aeneas away to found the new Troy (Rome).

Forced to choose between love and duty he and his sailors prepare to leave.

Feeling abandoned, betrayed and in distress Dido succumbs to both heartbreak and death.

In this day and age it was far more glamorous to die for love than to live for it.

Shake the cloud from off your brow,
Fate your wishes does allow;
Empire growing,
Pleasures flowing,
Fortune smiles and so should you.

The music and the voices will ensure this is a wonderful encounter with the performing arts of the Baroque for the initiated and for those new to the genre. A ‘Pretty Woman’ way to start.

Under the Rotunda
Brisbane City Hall

55 finalists announced for Portia Geach Memorial Award for portraits of those in the field of arts, letters and sciences, National Trust SH Ervin Gallery Sydney