And there’s another country, I’ve heard of long ago,
Most dear to them that love her, most great to them that know;
We may not count her armies, we may not see her King;
Her fortress is a faithful heart, her pride is suffering;
And soul by soul and silently her shining bounds increase,
And her ways are ways of gentleness, and all her paths are peace* Anarchy in the UK T-shirt, by Vivienne Westwood & Malcolm McLaren, 1977-8, worn and altered by Johnny Rotten - V & A Museum

Awesome, was the reaction of one bright young thing on twitter, when viewing the newly opened exhibition at the V & A (Victoria & Albert) Museum at London. British Design 1948 – 2012 Innovation in the Modern Age is now running until 12th August. The protagonist had no doubt seen the ‘Anarchy in the UK T-shirt’, designed by Vivienne Westwood and Malcolm McLaren, which epitomizes punk style and ideology. This Tee has been well documented in period photography as being worn by Johnny Rotten, lead singer of the Sex Pistols, and Sid Vicious, the group’s bass player. It is thought many of the garments worn by the Sex Pistols were passed around from band member to band member on a day-to-day basis.

This exhibition is one of the many events the city of London is hosting in this Queen’s Diamond Jubilee year and the year it is also hosting the modern Olympic Games. Wow, it’s a not to be missed summer in England, and shows like this should give a welcome boost to an economy hard hit by the world wide global crisis in recent years. London as always will put on its best and brightest face for the thousands and thousands of tourists expected to flock in. There is something so completely magical about this ‘old city’ with its layers and layers of history, its elegant Georgian terraces, broad and beautiful parklands, and a shopping mecca that holds its head high while iconic black cabs hustle and bustle carrying people from A to B. 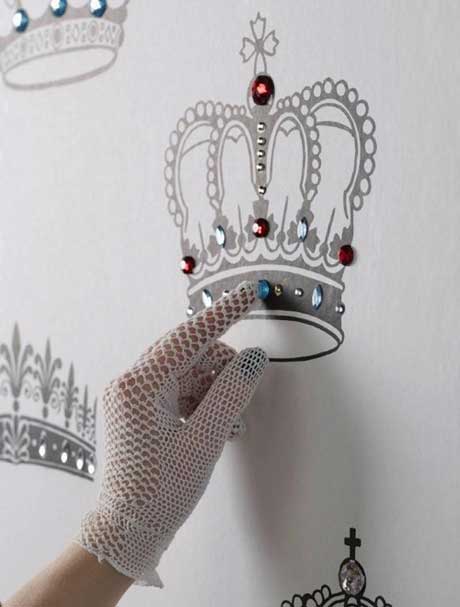 Modernism, which has been labelled a heady extravagance, has finally arrived it seems based on many reports, in the country whose citizens like to believe they have always been at a cutting edge. For the majority however such a concept still remains a novelty. Many still live out the reality of their actual lives in places that suffered squalor and hopelessness during the advancement of the industrial revolution where houses were put up quickly and cheaply and huge profit was the main motivator for builders, buildings and their design. Otherwise they suspend belief about the arrival of the modern age by luckily spending their lives living in picturesque villages. Much like the fictional Causton set in the county of Midsomer, where mayhem prevails each time there is a murder on a great estate, in a straw strewn field, or in a classically designed houses filled with antiques, art and wonderful characters. Britain is such an island of contrasts, from field to marshy flats, from high hills to pastures green, from industrial cities to market towns, from village to seaside where taking the waters can be an internal and external experience. It is good to remember that most of it has been subjected to design at some point, including the ‘picturesque’ landscape.

In respect to progress and change British designers have helped inspire the essential and eternal optimism, which must prevail to increase the resourcefulness of both people and communities in our global society. Great designers around the world today are helping this ‘big society’ re-invent themselves through BYO projects. These have a care for the resources of the planet and are encouraging recycling as a way forward; a concentration on reducing energy consumption is prioritized while, an appreciation for the aesthetic still plays a vital role.

It is vitally important for the future of our planet that the spaces we live and work in are designed to both inspire and nurture. They must also help us to understand and balance our planet’s resources, while managing urban, natural and virtual environments.

British creativity continues to contribute much to the world stage in the arena of design. The RSA at London’s Design Awards, since their inception in the 1930’s, have supported a pool of talent who have become recognized as designers of excellence. They have helped raise the profile of both the profession of design and its goals. Schools like the Inchbald School of Design at London, named for one of the most adventurous and innovate designers of his era, Michael Inchbald(1920 – ), are teaching and mentoring the design students of the future.

At the end of the 1950s in London, Michael Inchbald created a space of endless vistas at the entrance to his home with opposing mirror-glass panels. In the lobby two symmetrically placed obelisks reflected over and over again in the mirrors they had been applied to, offering the visitor a view of infinity that they also inhabited. If one of the outer doors was folded back against a mirrored wall, a door handle in the shape of a lion’s face seemed to also float into the kaleidoscopic scene. How lucky was I to visit. A master space saver, having designed the fit out for the Queen’s Room for the QE2, Michael Inchbald was for decades a leading light in his field. This stylish space dominated the Quarter Deck and drew exclamations of delight from the QE2’s royal namesake when Her Majesty visited the ship on the eve of her maiden voyage to New York. 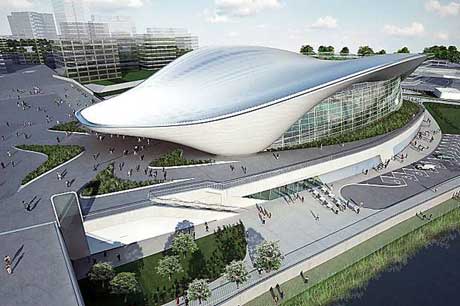 The focus of the V & A exhibition starts in the age of austerity, 1948 not long after the end of the Second World War and the year London hosted the Olympic Games last. At the time it gave the country, and its people, a huge hug and helped them to rebuild their shattered capital, regional cities and towns as well as the glories of the English countryside.

Great houses either went to God or received a great facelift, like Chatsworth House in Derbyshire. It now employs some 500 people a day just to get it ready to open for the tourist trade at 1pm. Interiors dating back to the 17th century have been lovingly restored, urged on by the Dowager Duchess and her husband the 15th Duke of Devonshire of an estate that is now in the hands of the 16th Duke and his family who continue their families proud tradition. Their multiple exhibitions at Chatsworth in situ showcase masterpieces of arts and culture from all around the world in a range of changing displays shown alongside their permanent collections. Despite being surrounded by all this tradition they champion contemporary design whenever possible.

Now in 2012 the Games have come back to London, revitalising that very proud city, whose heritage and traditions contribute to sustaining us all. Americans and Australians alike share a background of an English heritage from colonial times, whose layers have been added to by the advent of multi culturalism of a modern kind, not a conquering kind. You can almost taste the change. Designs for The British Olympic Team by Stella McCartney

The exhibition at the V & A examines how design has, in the intervening years since the war, changed. Through the era of the swinging sixties when short mini skirts invaded Carnaby Street and the Beatles reigned supreme and everyone drove around in mini cars,  to the caftan wearing seventies when flared pants, sideburns and elevated hair were part of a collage of colour dominated by brown, orange, lipstick pink and lime green.

They eventually gave way to an age of neutrals and shag pile carpet, that could easily, by the end of the decade, hide dead rats in its dusky depths. Then came the elevated eighties, where both men and women wore shoulder pads and the colour peach became the new black.

The nineties, while naughty and nice, were a major turning point with the rise of the so-called highly ‘creative class’. The age of technology was taking complete hold, driven by those who understood new attitudes towards global communication. Steve Jobs and Apple have a lot to answer for. Their focus on simple aesthetically pleasing contemporary design has driven the global consumer market to respond. The ‘creative class’ of the nineties did not align themselves with a country but rather were a global movement altering the way design works. They did this by seeking to understand all the nuances of manufacturing and what products pleased consumers, much more than ever before. The Brits, or Poms as we like to call them down under in Australia, were right there and were always seen to be at the forefront of change, although the difference is that today we, and the rest of the world have now joined in. The growth of international travel over the last three decades has ensured this would happen.

A selection of fabulous events complements the V & A exhibition as its marketing division works overtime to keep the crowds rolling in the door. If you are planning a trip to the ‘green and pleasant land’ this year be sure to check up on opening times and special events and purchase your tickets well in advance for the British Design Season at the V & A.

From David Bowie’s bolero to a Jasper Conran coffee table, Britain has always had an ambiguous relationship with modernity, showcasing the very best in contemporary design in every era of the ‘Christian age’.

Some comments by an English journalist Keiran Long, writing for the London Evening Standard, perhaps sums up the show being held at the V & A. He says,

‘to its credit, the V&A has put together an exhibition that is about much more than just that corporate gloss. It’s ambitious and complex in its selections, does not feel promotional… and has some genuine surprises… that show Britain’s enduringly ambiguous relationship with modernity… The fact that Jonathan Ive, Apple’s design director, was born in Chingford doesn’t make the iPad British. It is a product of a globalised world… and if London gets another Olympics in another 60 years, people will probably laugh nostalgically at the idea of a show about a country’s identity in design’. 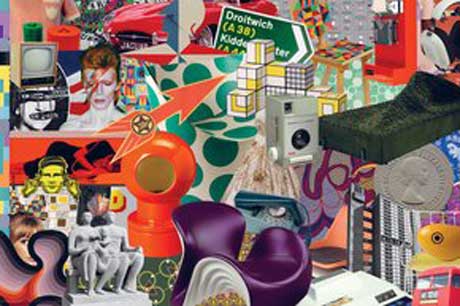 Drawing on the V&A’s collections and complemented by works drawn from across Britain, the exhibition brings together over 300 objects including product design, fashion and textiles, furniture, ceramics and glass, graphics, photography, architecture, fine art and sculpture

Celebrate the best of British post-war art and design from the 1948 ‘austerity’ games to the
‘awesome’ summer of 2012. The exhibition highlights significant moments in the history of British design and how the country continues to nurture artistic talent and be a world leader in creativity and design.

*I Vow to Thee, My Country is a British patriotic song created in 1921 when a poem by Sir Cecil Spring-Rice was set to music by composer Gustav Holst.

A skeleton clock attributed to French enamellist and creator of fine clocks Joseph Coteau (1740-1812) can be found in the David Roche Collection in Adelaide S.A