Do you know that region called the garden of France? It is where you can breathe the pure clean air amidst verdant plains watered by a great river? If you have traveled through its beautiful landscape during the warmth of the summer months you will have followed the tranquil River Loire for a long time, completely enchanted unable to decide on which of its two banks you would choose to live with a loved one, forgetting the rest of mankind

The château de Chaumont in the Loire Valley is a delightful confection and displays Italian stylistic influence, particularly in its machicolations, its entrance towers and its drawbridge built between 1498 and 1510 for Charles II d’Amboise. The choice of a site for a château was vital in military architecture and the custom of building on a hill, or beside a river, was maintained right throughout the period of building the châteaux of the Loire. 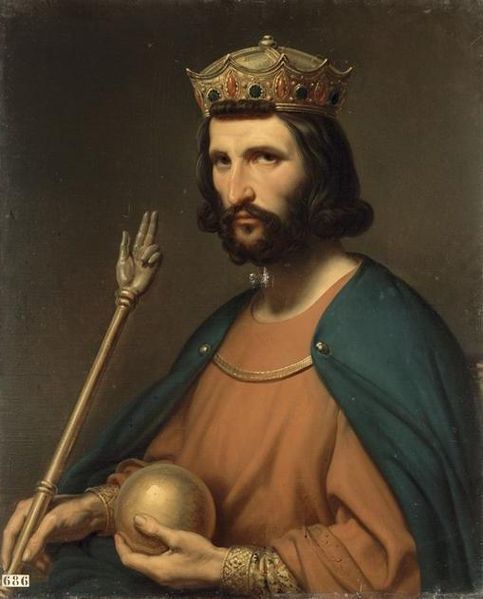 The name France derives from the Latin Francia, literally meaning land of the Franks, which its people were known as from the ascension of Hugh Capet first King of France in 987 and throughout the Middle Ages.

This was when French nobles were establishing their own power bases, building châteaux and resisting the collection of taxes constantly challenging the King.

Adalbero, Archbishop of Reims pleaded for Hugh’s succession ‘crown the Duke who was most illustrious by his exploits, his nobility and his forces.

He said ‘The throne is not acquired by hereditary right; no one should be raised to it unless distinguished not only for nobility of birth but for the goodness of his soul’.

The fine limestone the châteaux of the Loire were built from occurred naturally in a vast retaining wall that runs all along the right bank of the Loire Valley from Blois to Tours, where it is mingled with sandstone, millstone grit and potter’s clay.

By the thirteenth century in France engineers were producing a wealth of imposing buildings as glittering symbols of power both sacred and secular in the form of churches and châteaux for aristocratic patrons. Power was invested in the French medieval overlord who had legal and economic power over lands that came directly under his jurisdiction. The construction of a château was the product of a great fortunes as well as a developing economy. It did not depend solely on the possession of land, but also on money lending and the production and free circulation of goods.

The keep or earliest form of defensive tower had great symbolic value as traditionally the Lord’s right of jurisdiction depended on it.

When it was of no further military use, it was often retained to assert the privileges of the nobility and eventually over the centuries its remains or ruins became a romantic conceit.

It would be during the greater part of the sixteenth century that a rare stability on the land as well as in trade would usher in a cultural flowering, which would see many Châteaux built in the Loire valley, such a desirable piece of countryside famed for its fertility and mild climate. Gilles Berthelot at Azay le Ridau was not a warrior but a financier. He was also Mayor of Tours and Treasurer General of the Finances of France. The main building and return wing of his château were completed between 1518 and 1527.

Azay le Ridau is a château that became an emblem of a very modern kind of success, the great central tower was preserved from the old manor symbolized tradition and privilege. No expense was spared and work went ahead quickly and the harmony attained still delights visitors today.

The unity, simplicity and clarity of its design was achieved with horizontal bands emphasizing each level running unbroken around the building and similarly the vertical tiers seem to spring in a single movement from the ground flor to the pediments of the dormers.

Like a great work of sculpture the château impresses with its airy, calculated and controlled equilibrium an impression reinforced by one final detail, the moderate use of Italian ornamentation so fashionable at the time. 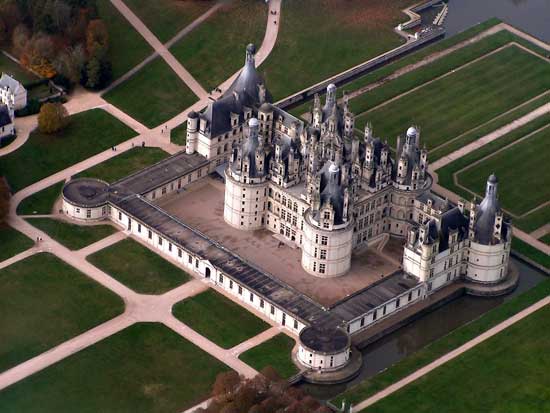 We would today would call it elegant and the idea behind it has remained intact, even if some of its stones have not.

The moat around a château afforded protection from attack and water surrounding the building was considered an attractive feature for the building of a château well into the sixteenth century.

The years between 1515 and 1519 were also favourable for architectural development in France because François 1 was a young, rich, energetic and an enterprising king, who also aspired to be the Holy Roman emperor until the failure of his election campaign against Charles 1 of Spain who became Holy Roman Emperor in 1519. Following this disappointing outcome François 1 threw himself into great building works beginning with the Château of Chambord in the valley of the Loire.

Francois 1 was, for of all those who worked for him, extravagant, generous and kind. Each of his building projects meant luxurious decorations both inside and out.

Chambord is a moated medieval fantasy dominated by a square keep flanked with round conically roofed towers. The roof is a unique example of architectural exuberance combined with classical details. It is a virtual forest of spires, pinnacles, lantern turrets and monumental chimney stacks and is reputed to have 800 capitals.

Chambord contains 440 rooms served on two floors by 75 staircases and lit by 365 windows many of, which are beautifully mullioned, with galleries resting on archways joining the corner towers. As it stands today it is essentially a French medieval building with a square keep flanked by found towers from which run ranges of lower buildings, again with towers at the corners, the whole being surrounded a moat.

Chambord is important to the evolution of architecture in France because of a new layout plan for the keep; its plan was in the form of a Greek cross, the arms of which led from each entrance to the central staircase.

In each corner a square space was divided into; a large room, two smaller ones and a closet, or appartement.

This was to become the regular unit of French domestic planning in the future that spread throughout the world. While it had no provision for parapet walks or battlements Chambord did have a spectacular staircase, rising in two flights; designed as a double helicoidal spiral by creative genius Leonardo da Vinci.

Each twist passed above the other without ever meeting and I know of two examples of a helicoidal spiral being used in contemporary Australia, both in car parks. One at the Sydney Opera House and the other at twentieth century architect Harry Seidler’s last great building in Brisbane, Riparian Plaza.

The work at Chambord continued without interruptions to completion in 1550 after Francois had died. Architects did not deny themselves the use of all the great resources of the Loire region and they respected stone enough not to treat it wastefully.