Bunyips and Dragons are a very appealing concept for children and the subject of a delightful exhibition coming to the NGV Australia Federation Square 25th July – 4th October 2015. Enchanting ‘large scale works’ by famous and best loved Australian book illustrators will be on display including those by award winning wonder Graeme Base, whose splendid Animalia was one of my own children’s favourite books growing up. His ‘guests enjoying a lively game of Blind Man’s Bluff 1988′ was an illustration for The Eleventh Hour, his award winning book published by Viking Kestrel-Penguin Books Australia in Melbourne, 1988. It was worked with watercolour, gouache, coloured pencils, pencil and pen and ink 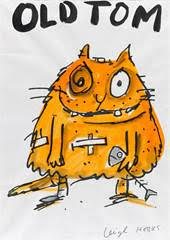 Tony Ellwood, Director, NGV, said, ‘This exhibition presents more than 80 works showing the uniquely Australian character of our children’s books and reflecting the incredible growth of Australian children’s literature over the past forty years. From early work by Ron Brooks and Peter Pavey, to drawings from popular contemporary books by Sally Rippin and Leigh Hobbs, these appealing and popular illustrations with a distinctively local bent will be recognised by people of all ages. Illustrations in children’s books are the first artworks we encounter as we grow up, guiding our imagination, stimulating our curiosity and opening up new worlds.’  he said. Leigh Hobbs Poster design for ‘Old Tom‘ 1994 proves his point. Finished with polymer paint, brush and ink and fibre tipped pen, it was the gift of Albert Ullin OAM in 2014. 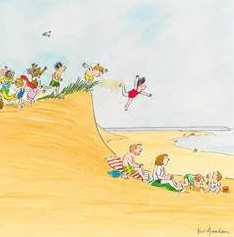 This is significant. The works on display were all donated to the NGV by Albert Ullin, who was the founder of Australia’s first children’s bookstore, The Little Bookroom. Highlights in the exhibition include pen, ink and watercolour illustrations from Bob Graham’s classic children’s books Crusher is Coming and his delightful Greetings from Sandy Beach (pictured), which Ullin received as a gift from the illustrator for the 30th anniversary of The Little Bookroom. Alison Lester’s drawing of a green dinosaur in Thingitis, the 1996 book by much-loved author Robin Klein is also featured. ‘Through Albert Ullin’s tremendous gift of this significant collection of illustrations’ Tony Ellwood pointed out…’ the NGV is able to present an insightful survey of Australian children’s picture books and literature.’ Two drawings from Brooks’ first book The Bunyip of Berkeley’s Creek feature in the exhibition and were among the first purchased by Ullin for his collection. The book is now regarded as the picture book that launched modern Australian children’s literature. 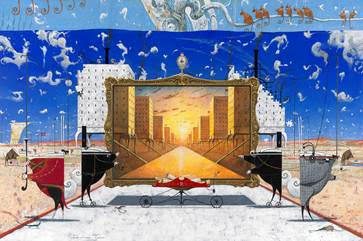 Australian born illustrator Shaun Tan produced the images for They made their own houses 1997, illustration for The Rabbits by John Marsden, using synthetic polymer paint, gouache and coloured pencils. Throughout the exhibition there will be selection of public programs and you will be able to hear the ‘inside story’ from Graeme Base, Albert Ullin and Petra Kayser all in Conversation at the NGVA Theatre. During Children’s Book Week on Wednesday 26th August well-known author and illustrator, Bob Graham will read his latest book How the Sun got to Coco’s House, which will be followed by a quick sketch session – fun for all the family. Bunyips and Dragons: Australian Children’s Book Illustrations will be on display at The Ian Potter Centre: NGV Australia at Federation Square from 25 July 2015 to 4 October 2015. Open 10am-5pm, closed Mondays. Free entry.

Western philosophy finds a basis in the ideas of three geniuses of antiquity, Socrates, Plato and Aristotle who helped to found the system we live by, democracy