In every art form, good models give birth to ideas by exciting the imagination. The creation of fine furniture in any age is dependent upon its requirements for social gatherings and entertainment. Its design has historically always reflected changing conditions, new modes of life and ways of thinking, as well as function and use.

Purchasing a select antique piece of fine furniture such as this superb Louis XIV Bureau Mazarin made circa 1700 (within ten years) is a considered decision.

A piece like this is admired for its historical and cultural significance, as well as being an example of wonderful design with superb proportions, fine hand craftsmanship, the use of such marvelous and often rare materials and the skill of the worker in assembling the whole.

Attributed to French ébéniste Nicolas Sageot (1666-1731), who was active 1660 – 1720 at Paris, this Bureau Mazarin is an example of fine French eighteenth century cabinetmaking. It can be found in the showroom of Martyn Cook Antiques, Rushcutters Bay, Sydney. Nicolas Sageot was a younger contemporary of, and inspired by the work of the ébéniste to King Louis XIV (1638-1714), the illustrious Andre Charles Boulle (1642-1732). Boulle benchmarked a standard of hand-crafted manufacture in brass inlaid furniture that all other members of his trade strove to emulate.

He perfected the techniques required for a distinctive style of inlay work that had been developed by sixteenth century craftsmen in Italy using splendid materials as brass, pewter, silver, copper, mother of pearl, ebony, horn and tortoiseshell.

Coloured foils of red, green and blue were used as a background to the transparent material tortoisehell. André-Charles Boulle was also one of the first cabinetmakers to use gilt-bronze mounts effectively. The mounts protect vulnerable parts of the carcass and add a great deal of sculptural beauty to the piece. Etching of a design for a table from his book, Ornamens Inventory, by Jean Berain the Elder, c. 1670–1700. Courtesy of the Victoria and Albert Museum, London

Designs produced were to the admired and intricate motifs of painter and engraver Jean Berain the Elder (1640 – 1711) who worked on theatrical costumes and opera stage sets.

His son Jean Berain the Younger (1678-1726) trained with his father and his work is often difficult to distinguish from that of his father and teacher. Jean Bérain the Elder and André Charles Boulle’s influential designs were published in 1659-1690 and 1707-1730 respectively.

Berain produced playful designs for engraving that were inspired by the geometrical and complex decoration on a small scale that was originally used by the ancient Greeks and Romans, involving intertwined tendrils and foliage.

Re-discovered during the Renaissance period in Italy these tiny intricate profuse designs proved popular for the next few centuries enjoying a number of revivals, especially in the seventeenth and eighteenth centuries in England and Europe. Berain the Elder was considered an ‘oracle of taste’ by his contemporaries and King Louis XIV declared that he was the ‘greatest French artist of all time. Chimneypieces, drapery, ornamental mounts, andirons, faience, chandeliers, sconces, and wall panels all came to life on his watch.

The iconography he produced included flaming hearts being hammered onto anvils by cupids, assorted animals integrated into florid arabesques, and grotesques that were entirely enchanting.

Arabesques were designed around a central symmetrical format while ‘grotesques’ were delightfully random, having a design repeat pattern that could be expanded into infinity.

Berain also developed a range of Chinese motifs, urged on by an enthusiastic Louis XIV, who so admired oriental art. Chinoiseries helped Europeans to transmit their ideas about the magical land of Cathay they had never seen through a multiplicity of imagery and they became the height of fashion during the mid eighteenth century after King Louis XIV’s death in 1715.

Ébénistes in France prior to 1751 were not required to sign their work and it was only those working for royalty after that who were exempt up until the time of the French Revolution. The Jurande des Menuisiers Ébénistes  examined pieces and if satisfied impressed their initials J.M.E. on a piece.

There are only a handful of pieces known marked with a Sageot stamp.

Good art in any age, whether it is a painting, sculpture or a piece of fabulous furniture like this will always be an excellent foil for its surroundings whether traditional or contemporary. In the case of an antique the value is increased if it is in fine condition, has a fine provenance and a connection that can be traced back to its original owner or maker. It is all about purchasing the very best example of a combination of wonderful design aesthetics, quality materials and excellence in manufacture, in this case hand craftsmanship.

Other pieces attributed to Nicolas Sageot are in the Petit Palais Musée des Beaux-Arts de la Ville de Paris, The Wallace Collection London, and the large drawing room at the Chateau Coppet in Switzerland, which is famed for being the resting place of one of the eighteenth centuries great women of influence Madame de Stael and Jacques Necker, her father. Ébéniste Nicolas Sageot was most likely active in his trade from 1690 onward, although written records that exist only date from 1698 when he could be found working on the Grande Rue du Faubourg-Saint-Antoine.

In 1706 he can be found working as an ‘Ouvrier libre’ or free worker and in the same year he was appointed Maître, a master of his trade. Married in 1711 to the daughter of the ébéniste Jacques Roussel, he was a retailer until 1720 when he closed his atelier and sold his stock, which was purchased by Marchand Mercier Léonard Prieur.

Nicolas Sargeot apparently suffered ill health in his 50’s and is recorded as being committed to the psychiatric hospital of Charenton in 1723, where he died in January 1731.

The Bureau Mazarin was named for the man this style of desk was first designed for, Cardinal Mazarin.

He controlled France’s young King Louis XIV’s fortunes from his childhood until 1660.

Mazarin died when Louis was 22 years of age and the young King surprised and amused his courtiers by declaring ‘L’Etat, c’est moi’ – I am the state.

In France in Nicolas Sageot’s day the craftsmen making fine furniture were: 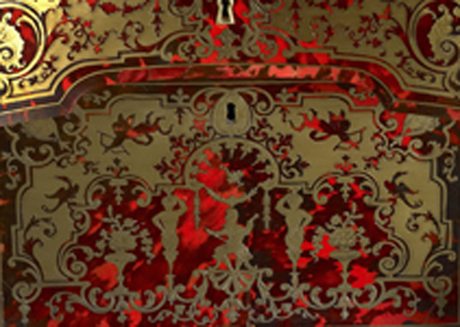 Menuisiers – an artisan who we would describe to day as a carpenter-joiner. His work was mostly accomplished in solid woods producing seat furniture, bedsteads, stands, commodes and panelling (boiserie) etc.

Ébéniste – to-day’s parallel would be a cabinetmaker. Highly trained in the art of veneering and cabinetwork, he was an accomplished artist also in marquetry work (an ébéniste-marqueteur).

Doreurs – highly skilled gilders, who applied gold to the bronze mounts, which were made by Fondeurs-ciseleurs. Fine furniture at the time was mostly produced for nobles, whose houses were designed to ensure the progression from one room to another gave a full sense of their importance.

Superb antiques such as this are very powerful in a streamlined modernist setting of significance, whether for a professional or for personal use.

They provide considerable interest while helping to preserve for posterity our significant heritage for future generations to learn from.

Andre-Charles Boulle certainly aroused the interest of his contemporaries and his techniques were revisited by the next generation of cabinetmakers toward the close of the century.

These workers all had incredible reputations and gained some fame. An example of desk made by Gerrit Jensen’s using the ‘Boulle’ style and technique is in The Royal Collection.

Woods that were used for veneering included cherry, olive, ebony, violet wood, amaranth and palisander all exotic timbers, which were flooding into Europe and England at the time. The technique of Boulle suffered a substantial revival during the Victorian age as well. However these works are not considered in the same sphere in terms of hand crafted quality and have been distinguished by a change in spelling to Buhl after 1815.

Ormolu-mounted and brass-inlaid tortoiseshell, ebony and ebonized Boulle marquetry, inlaid overall with Bérainesque motifs in première and contre-partie, the rectangular top with foliate corner clasps, centrally inlaid with a figures beneath a Baldequin, within engraved strap-work, foliate scrolls, flying putto, birds and insects, masks, bowls of flowers, dragons, monkeys, jesters and Therms, above a recessed frieze drawer and a kneehole cupboard, flanked to each side by three bow-fronted drawers over moulded Lapets with suspended acorn drops, the sides inlaid with further strap-work and animals including insects, birds and elaborate foliage, with scrolled and inlaid angles; raised on 8 scrolled and inlaid legs joined by x-form stretchers, on acorn bun feet.