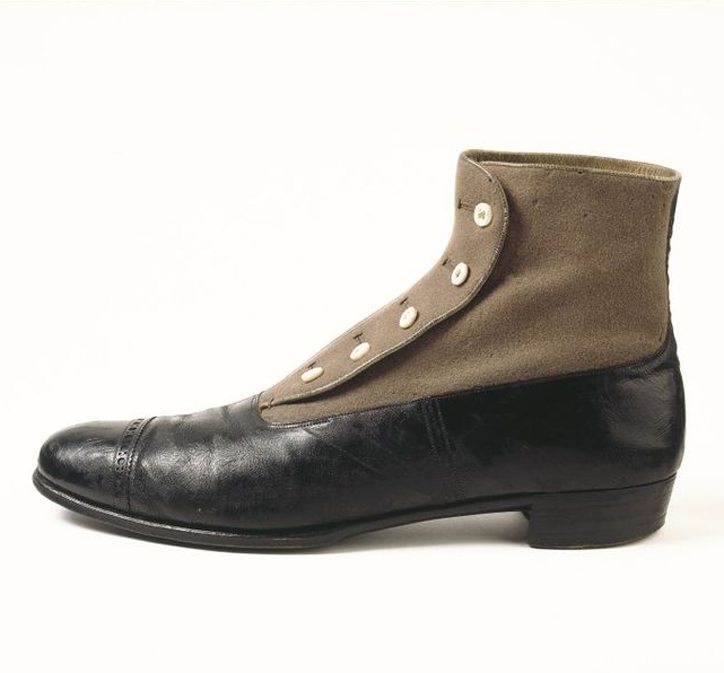 Buttons are a small object used to fasten two sides of a garment together. Buckles were both practical and decorative although following a long development, were in the end only used for decorative purposes. 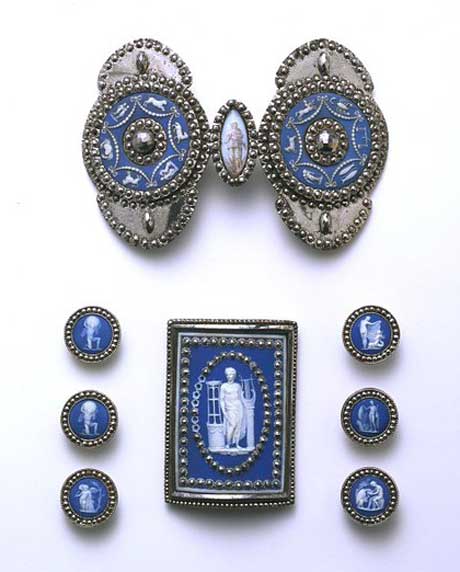 The first recorded use of the word ‘boton’ is said to have appeared in the 12th century according to scholars, even though they were used as early as 2000 BCE.

The term ‘buckle’ was coined by English diarist Samuel Pepys when he wrote:

By this time buckles were separate to the shoe or garment and held by spikes, which held it fast.

The buckle consisted of two parts: the operative part, known as the chape, which was made separately to the decorative ring and mass-produced in steel.

The ring was the work of a master ‘buckle maker’. Pepys mention in his diary is the first recorded instance of the word buckle in the English language and coincides with the rhyme ‘one, two buckle my shoe’, which is thought to derive from this period.

Down the centuries buttons and buckles were made in highly decorative and trendy styles.

Some were gold set with gemstones, pearls, enamelware or cameos ensuring they became an important aspect of both jewellery and costume history.

There is a stunning family portrait in the Museo Nacional del Prado in Spain of the Duke of Osuna, Pedro Téllez Girón (1755-1807) and his wife, the Countess-Duchess of Benavente, Josefa Alonso de Pimentel (1752-1834) and their four children:

Family portraits were not generally known in Spain when this one was painted by Francisco de Goya y Lucientes (1746-1828). The Duke was considered an enlightened aristocrat and his wife were among Goya’s first patrons.

The closeness of the family to the painter is reflected in how intimately each member is portrayed; perfect representation of each personality within the family group. The painter uses grayish and greenish tones with a light, subtle and precise technique, masterfully rendering the fabrics, lace and objects. On her dress the Duchess is wearing a stunning set of exquisite painted buttons.

Her daughters are also wearing buttons too, but theirs remain unpainted.

Buttons were used in ancient Greece and Rome and then introduced into southern Europe during the 13th century.

They are those things that belong to the category of things already there.

As with any number of items taken for granted, the details of their origins has become lost.

By the 14th century they were useful and fashionable and by the 16th and 17th centuries were used almost exclusively by men.

Endless portraits from the 16th and 17th centuries have a dazzling array of ornament buttons embellishing the doublets and breeches of nobles and aristocrats and buckles on their shoes.

For gentlemen costume was completed with walking sticks, swords, and the mask. This was held in place by a button gripped between the teeth or a thin handle pushed into the hair, protected the complexion or preserved the wearer’s incognito. 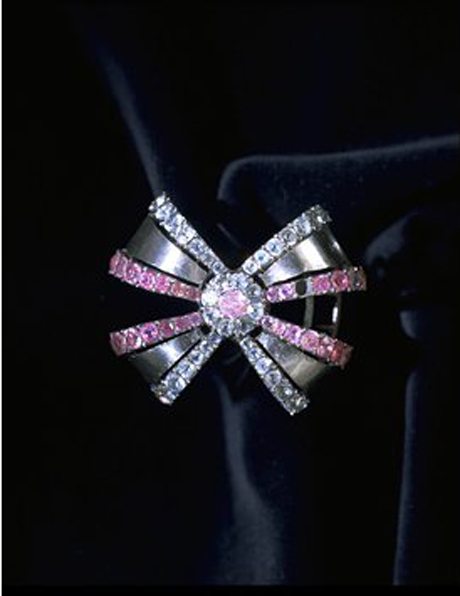 Many of the styles he preferred were also used in England and Spain.

By the early part of the 18th century paintings were a common source of images for buttons and by the middle of the century gem like paste borders were added.

They were meant to recall the luxurious pleasures of the ‘rococo’ spirit, that period when the art of pleasure became a serious business.

Wealthy citizens of the 18th century charged their buckle-makers to match the curves of their feet in bespoke buckles, which cost a fortune.

Glittering pastes and precious stones reflected the status of the wearer, as well as the importance of the occasion.

The sheer quality of the production of paste buttons contributed to their appeal. Unlike conventional gemstones, pastes could be cut to any shape and produced in a wide range of colours.

Prints of works by such artists as Antoine Watteau, Francois Boucher and Nicolas Lancret (1690-1743) were widely disseminated. 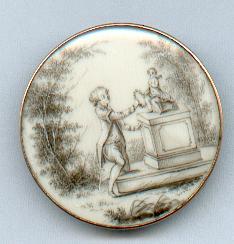 It is common to find buttons with original motifs reversed, indicating they were taken directly from reproductions.

By midway through the 18th century the enormous increase in the popularity of paste jewelry and buttons as a result both of changes in social life and advances in manufacturing techniques meant they became more readily available.

Buckles and buttons became available in a wider range of choice than ever before and cheaper versions were made of steel, brass or other metal alloys.

In addition the stones were light the metal settings often silver were usually thin and unobtrusive.

Workers in both England and France excelled in the production of paste buttons. In England in 1770, the year Australia was found by Lieutenant James Cook, a tailor by the name of Dartigalongue announced to his customers that he was able to obtain ‘ready made’ garments in all sizes, which could be sent to the provinces and abroad. 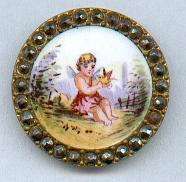 This allowed those less wealthy people choice with cheaper, ready-made examples of both buckles and buttons available.

This was the first time anyone had conceived the modern ready to wear system, one that would revolutionise costume and jewellery and the production of buttons.

In France some were painted with portraits of famous personalities from the beginning of the French Revolution.

Among them was the publisher of Thomas Paine’s The Rights of Man (1791) M. Barere de Vieuzac, Vicomte de Mirabeau who served in the American War of Independence.

Then there was Mme Lousie Elisabeth Vigee Lebrun (1755-1842). She was court painter to Queen Marie Antoinette. M. Antoine Pierre Joseph Marie Barnave was a lawyer who escorted the royal family to Paris and was later arrested and executed.

In the second half of the eighteenth century women’s shoes were produced in kid leather and beautifully decorated often with a painted design. Glamorous buckles provided a finishing touch, although they were no longer needed practically. 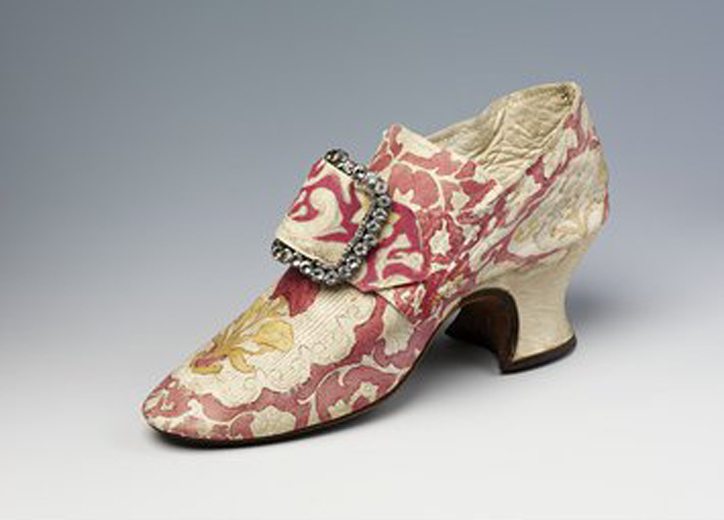 In 1767 England’s Lady Mary Coke recorded in her diary that she had bought six pairs of painted shoes from a shop in Brussels. Emperor Napoleon in his Study at the Tuileries…by Jacques-Louis David. Note his buckled shoes painted 1812

1791 was the date of an uprising against the monarchy, which saw some 20,000 British buckle makers march on London. They hoped that the royal family would help them to revive buckle demand and keep them in business.

Buckle manufacturers from Wolverhampton, Walsall and Birmingham all obtained an audience at Carlton House with George, the Prince of Wales.

Despite commanding the members of his court to resume wearing buckles, many still went out of business.

The French Revolution had brought about change in fashionable trends, and over-dressing became equally unfashionable in England as it had in France.

The coming to power of Napoleon Bonaparte (1769-1821) in France dramatically changed not only the political and social scene, but also the world of costume

The perpetual attraction of gold at this time stems from both its intrinsic brilliance and the associations of wealth and power that it had by now naturally attached to it. In England shoe buckles had in the main completely died out by the early 1800s, although they were still used to decorate and accessorize shoes, a style that was eagerly adopted by English Victorian ladies.

Ankle high boots were popular for men from the 1830s right up to the Depression in the 1930s.

They came in a wide range of styles, including those with side-button fastenings, most made of hard-wearing leather. Roman head buttons set in mother of pearl borders alluded to the splendour of Empire and to what England’s famous poet Gordon, Lord Byron called ‘ a certain exquisite propriety’

Men’s costume would be affected throughout the 19th century by details of shape and colour. It was also codified in the increasing number of clubs and circles, some of which became renowned for their elegance and good taste.