Set in the bleakness of the wintery light in Ireland, where the rocky rugged beauty of the landscape of the seaside village is all pervasive, this is a thought-provoking movie of monumental proportions.

The desolation of the brilliantly filmed scenery helps invoke its atmosphere and mood as does the shaggy endearing presence of the priest.

In taking confession from a local identity, the priest finds himself suddenly and swiftly facing the end of his life within a week.

He discovers he is about to be punished for the twisted sins against children by other priests. It is living through the time this ‘good man’ is given to get his house in order by the potential killer, that is at the heart of this sublime film from Irish writer-director John Michael McDonagh.

There is no doubt Calvary highlights the terrible moment when Jesus died betrayed by his friend and disciple, nailed to a wooden cross on a remote hill of the ancient world.

It may have happened over 2000 years ago, but what has always puzzled so many for so long is how after being flogged and tortured he expressed forgiveness for those who had committed the terrible crime against him. Why people still ask today? Well this defining story set in our own contemporary age gives us an opportunity for insight into what real forgiveness means.

Just as the sand on the beach stretches for miles surmounted by a border of shifty sand dunes whose sparse grasses cling hard to live their life, so do the local people in this torrid tale cling to theirs?

This is a movie guaranteed to plummet the viewer into the dark depths of their own soul to not only gauge their reaction, but also to find out how they would deal with the concept of real forgiveness when faced with the same choices this priest finds himself compelled to make.

My movie buddy and I went to see Calvary at the local Palace Cinema. She was at a complete loss for words, as indeed we both were, when were re-emerged back into the bustling freezing cold wintery scene of Chapel Street South Yarra after it was over. 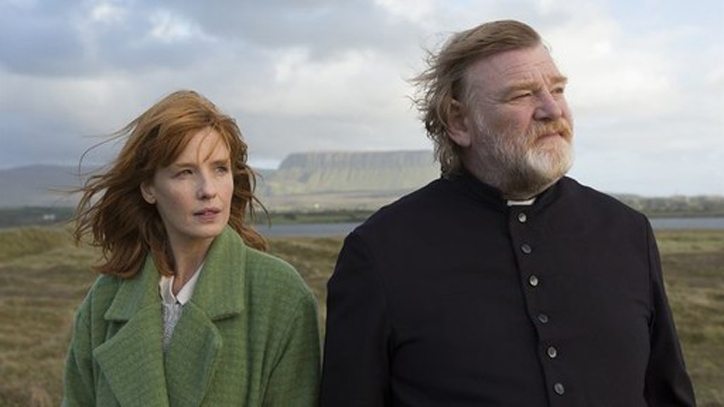 As a descendant of the ancient Greeks, she has been used to the idea of theatre as tragedy all her life. However this movie she said went far beyond what she had ever envisaged before, taking her into a place of deep contemplation and sorrow and then back to earthly reality.

We learn that in the city Father Lavelle’s lovely Titian haired daughter Fiona (Kelly Reilly) has recently tried to end her own life; a mortal sin.

Yes, he has a daughter, not something Roman Catholics, especially in Ireland, could understand a priest enjoying.

And she arrives in her father’s village on the fateful day of the dreadful confession. It is with despair the fragile Fiona has come to seek him out in this small village in the Irish countryside, not only seeking solace but also to find the answers she is seeking.

We learn that his wife died before he entered the priesthood, answering a calling he felt compelled to make. Fiona doesn’t know she’s about to lose him again, permanently.

This exceptional ensemble of actors reveal the disgust and distress modern society feels for their past relatives and their failings.

Particularly the ‘body of the church’, which is full of humans and their faults, not divine beings

Suicide, pedophilia, self-destruction, abusive relationships and the callous behaviour of the rich , powerful and wasteful have been very destructive. All are held up for examination. We discover that ideas of decent, civilised and honourable human behaviour have entirely fled the Irish countryside and the local village where the priest and the confessor both live. He is unable to relieve his own pain and suffering so hopes that by taking the life of an innocent, and importantly for him, a ‘good’ priest’s life he will.

We discover he was abused constantly as a child by a priest and has lived with the terrible shame and pain ever since. He has bottled up all his emotions inside, the society of his own age not allowing him any chances to share his torment and distress.

All this has ensured is that it the pain would fester away like a giant sore inside until in the end he believes that only by murdering a man everyone admires, will he be able to extinguish it for all time. Sadly it doesn’t work that way as he finds out in the end. But will he be denied forgiveness for his sins, as he himself has denied? Those involved with helping victims of such appalling crimes will reveal that it is all really about degrees of forgiveness, which is often way beyond the realms of human understanding for so many.

None of us ever get over the tragedies of life. We can only learn to live with them. Choosing to disengage ourselves from the imagery does not mean we can escape facing the consequences eventually.

No one can really protect us from the experiences of human life including death, betrayal, loss of trust and sickness, as well as all sorts of extremes of happiness and adversity. Somewhere, somehow and sometime we all have to stand and face them because they are important aspects of human life on earth and integral to it. In this Irish village there are no local heroes, just people merely ekking out a living.

The harsh elements of the landscape, both in the city and in the countryside becomes a metaphor for the struggle paramount to the unhappy lives its locals are leading.

It’s one that in the countryside basically just gets them by, not one that would ever see them being able to leave its relentless bleak wasteland, where wishes don’t come true.

There is no doubt they would like to dream about heading off to live in the restored docksides of Dublin inner city where Fiona lives in the unrelenting and edgy grittiness of its contemporary minimalist style. In many respects it is a style that is unforgiving and uncompromising in its philosophical and intellectual intent. 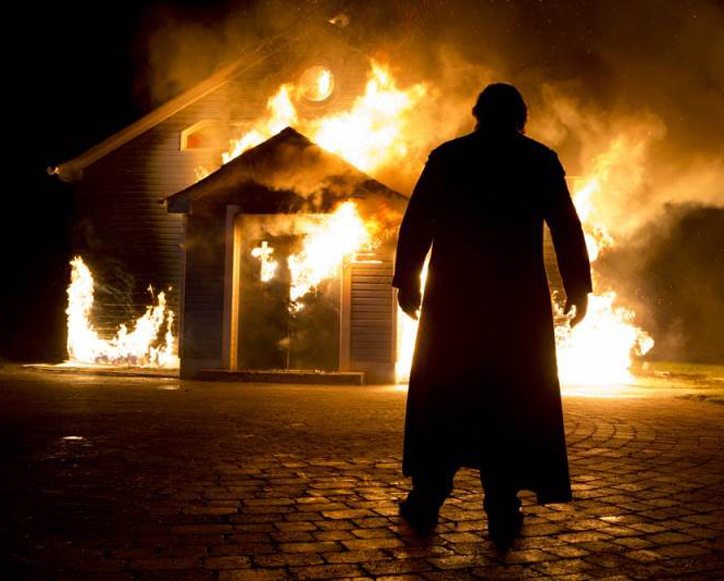 Over the days that his daughter stays with him she becomes part of his very sparing and challenging life. She cannot fail to be disturbed by the locals and their behaviour. This includes the dastardly death of his faithful dog and the burning down of his church.

She meets the local characters; the young altar boy who stands patiently and quietly painting the landscape of the beach, the butcher whose wife has been unfaithful, the local squire – a wealthy man whose wife and children have left him as well, and the atheist doctor, who is also a strangely sinister police inspector.

As she struggles to understand her own perceptions about her father, she witnesses the pain all around him and how others have to learn to face their terrible disappointments in life too.

This helps her to gradually come to terms with her father’s seemingly abandoning her not long after she had lost her mother as well. She finally realizes before she leaves to go back to her city life that her father’s decision was not really about her at all.

It was all about his having the courage of his own convictions to answer his calling when he discovered that the rest of his life was meant to be about helping others to understand what forgiveness means. Forgiveness is the single concept pivotal to the film and its ending, which is tragically conceived and brings the point home to bear violently at first, and then compassionately, tearing the heart finally from your chest.

The story, the script, the acting, the directing, the staging, the cinematography of Calvary are all superlative. This is a 4.5 out of 5 experience, not one of the happy kind, but one of excellence in film making kind.

No weapon that is fashioned against you shall succeed, and you shall confute every tongue that rises against you in judgment…Isaiah 54:17

He has delivered us from the domain of darkness and transferred us to the kingdom of his beloved Son…Colossians 1:13 Faith lights up the whole world is the simple message of Mary of Magdela, in a movie about this sainted lady in history, directed caringly by Garth Davis (Lion)