The fashion for cameos and intaglios began soon after Napoleon’s Italian campaign of 1796 when cameos were brought back to France from Italy. Many of these were of Greek or Roman origin. Their beauty and perfection fascinated Napoleon. He had some mounted especially for his own use and for his sister, the very beautiful Paolina Borghese. He also promoted the foundation of a school of gem engraving in Paris. The skills of fine workmanship was established and rendered in precious stones like emerald, although more often in hard and semi precious stones, such as agate, cornelian, jasper and, to satisfy the lower end of the market, also in modestly priced shell.  Cameos were so popular they were set in all sorts of jewels such as tiaras, necklaces, bracelets and earrings. Josephine’s favourite diadem was made of shell inlaid with cameos. It resides in the Musee d’Art et d’Histoire, Palais Massena at Nice, France.

The cameos are set in gold, silver, ivory, rubies, and sapphires. Another diadem in 1823 became part Josephine’s grandaughter, Josephine of Leuchtenberg’s dowry upon her marriage to the future King of Sweden, Oscar I. Now part of Swedish Crown jewels, the tiara has been worn by many royal brides since. 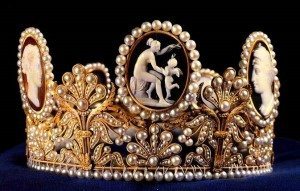