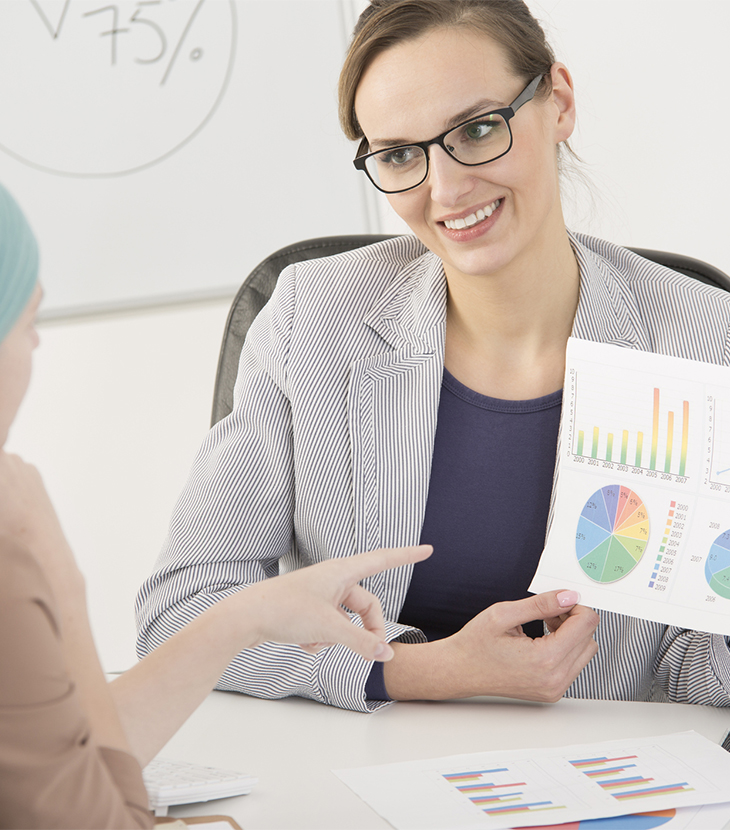 Making goals that are realistic is vitally important when you are ill… especially when you have cancer. They should be about taking much smaller steps, not the big ones like you probably would have made in the past.

The big challenge is scaling back on our own expectations, while also getting your head around what ageing actually means to you personally, as you endeavour to help others make the journey along with you. 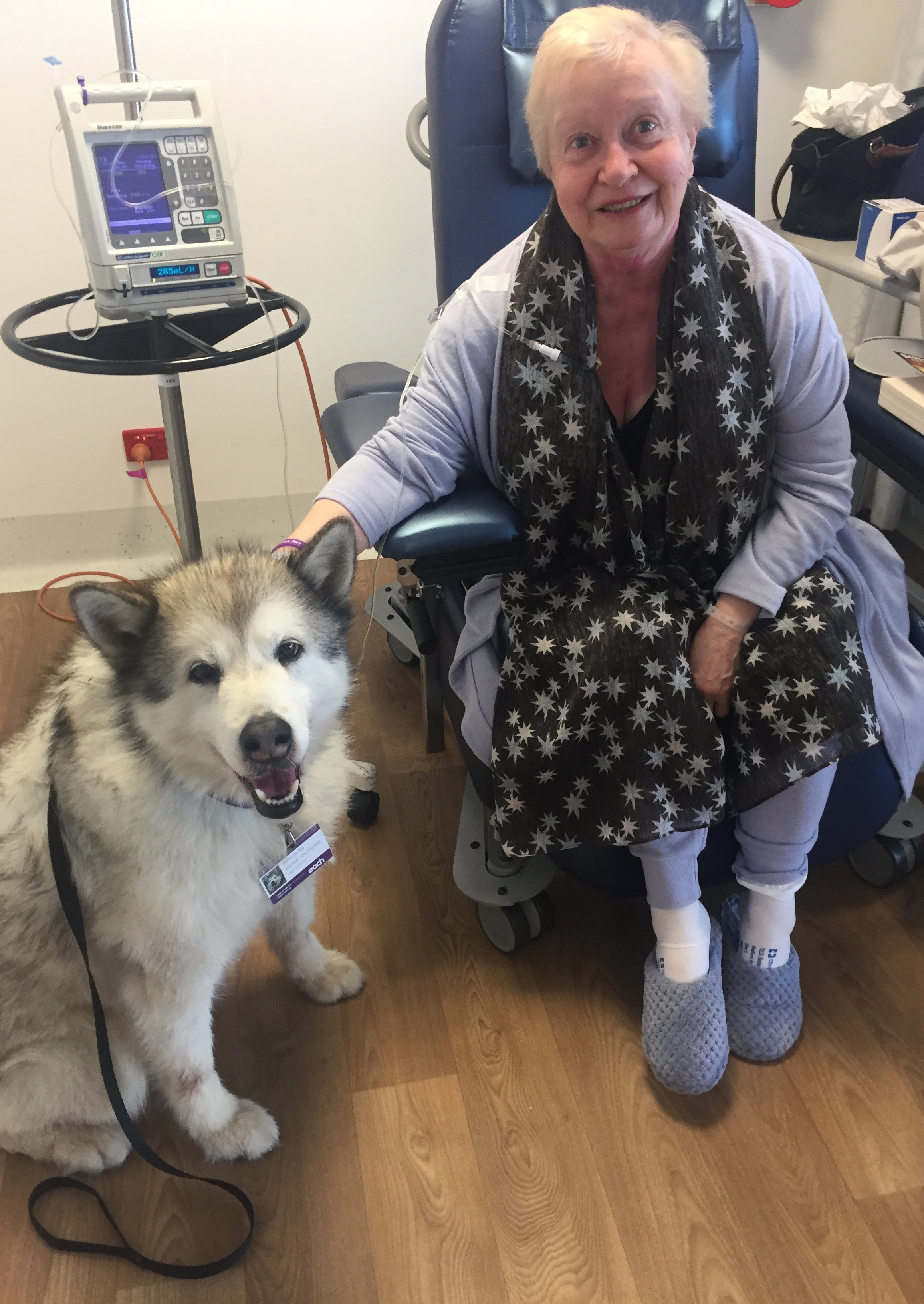 Aurora the Chemo dog comes to say hello to Carolyn on the first day of her chemotherapy treatment, 2018

Based on conversations I have had with people in the cancer unit at the Epworth Richmond here in Melbourne, many families find this a most difficult time.

My family would agree it would be fair to say, that I have had in my lifetime an ability to cope with so much more than many other people.

Stoic is the word, which springs to mind, often used to describe my mother Rita (Alterator) Trenerry who was 93 when she passed.

She taught me to keep getting back up and getting on with it, as her mother Margaret (Schofield) Alterator had done before her.

Having cancer means I do seek to bring everyone around me down gently too, because they may expect me to react as quickly as I would have done in the past. The reality though means it’s not really possible, even if I can still type 110 words a minute.

Things are changing rapidly with my daily abilities to complete tasks.

Thanks to also being a diabetic, since my chemotherapy has been over, I now find myself with permanent peripheral neuropathy.

This means the tips of my fingers and toes are going off under the skin like fireworks all the time; the degree of distress depends on the weather and my physical environment.  Simple things like doing up press studs and hooks and eyes have become a torment and I drop things all the time.

Using my mobile phone, especially typing messages was becoming a nightmare, until recently my eldest son Paul installed the app onto my computer, where my ability to ‘touch type’ continues on, despite my affliction; as seemingly an integral part of my DNA.  The fates are kind. 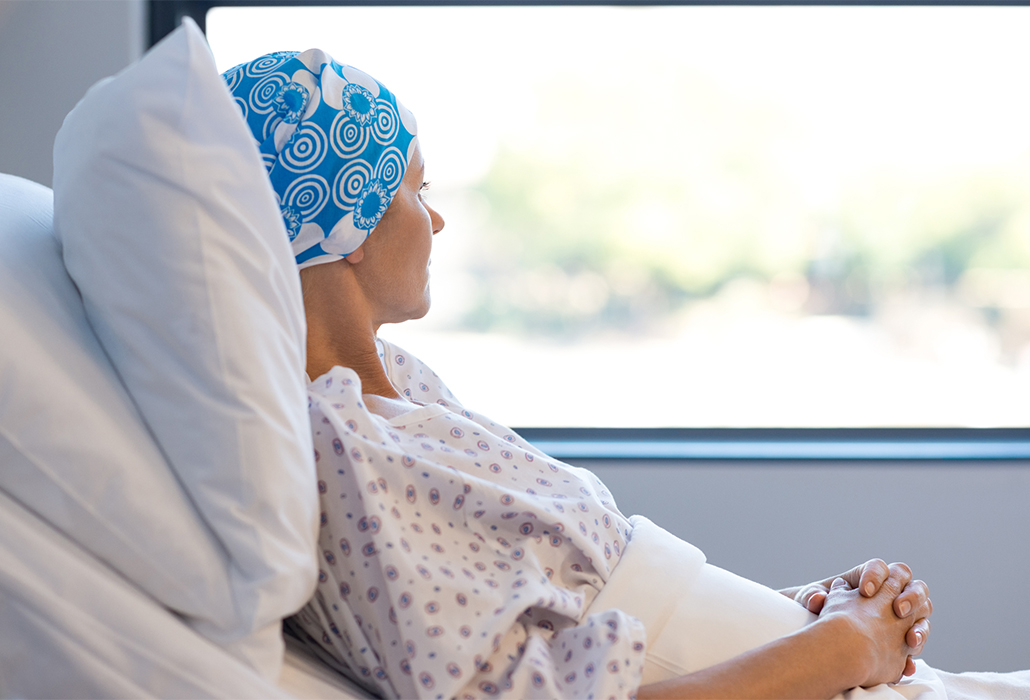 Basically my knowledge of the concept of ‘know thyself’, the ancient maxim about us learning first and foremost who we are ourselves, makes me realize I need to take mini rests as my body dictates, not my head. This ensures my time with both my family and friends are as rich as meaningful as possible.

My Nan always said Carolyn, timing in life is everything, and I certainly know now what she meant.  You can understand how, while I am by nature a half glass full kind of girl, today when I am writing this, I am coming out of an extensive period in which everything has felt surreal. 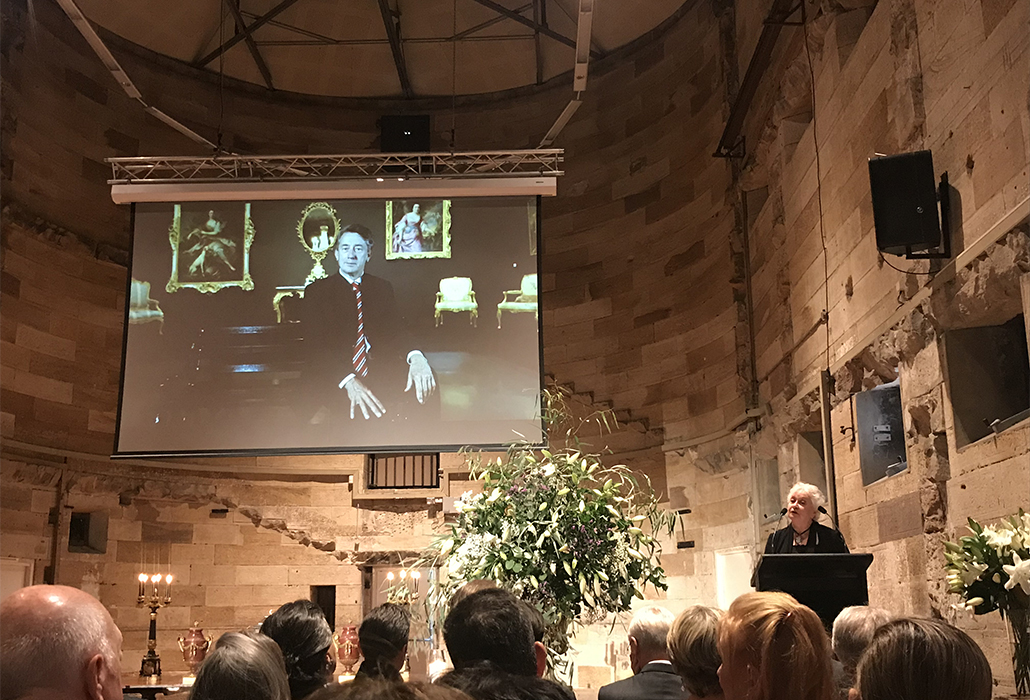 It is just over two weeks now since I was MC for a memorial service for my ‘bestie’ of over forty years, Martyn Gregory Cook, a man of influence and a former Sydney based antiques dealer.

A master of his trade and the founding director of The David Roche Foundation House Museum and Gallery in Adelaide more recently, Martyn died suddenly in the early hours of April 2.

The service remembering his life was held in the auditorium of the National Arts School at Darlinghurst in Sydney on April 11, 2019. It was a fitting tribute to a marvelous man, one who lived his life touching so many people with his kind and generous nature. 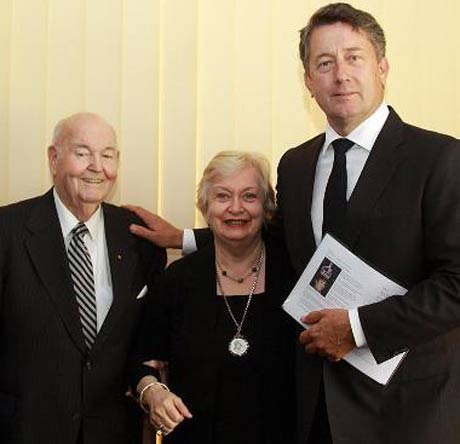 Carolyn McDowall in January, 2013, with Martyn Cook and Life Member of Dogs NSW Robert L. Curtis OAM, both now gone. We are at the memorial for Countess Marina Violet ‘Dicky’ Ouvaroff (1931-2012), for which I was also MC

My own admiration for Martyn’s vision and insight grew over the just on forty years we knew each other, and as he gradually became both an enriching and empowering influence for all who knew him.

We talked often, and right up to the day before he died, supporting each other as best we could. He couldn’t believe we had been both diagnosed with a terminal illness in the same year.

He used to remind me every time we talked, he was definitely coming to Melbourne to go to the movies with my party, who are all helping me to be able to be around to see Episode IX of Star Wars: The Rise of Skywalker on December 20 together. It’s a family tradition.

Being taken away so suddenly in the year following his sixtieth birthday, was indeed far too young. The comfort for those of us left behind, is we do know he suffered no pain, leaving quietly in his sleep. 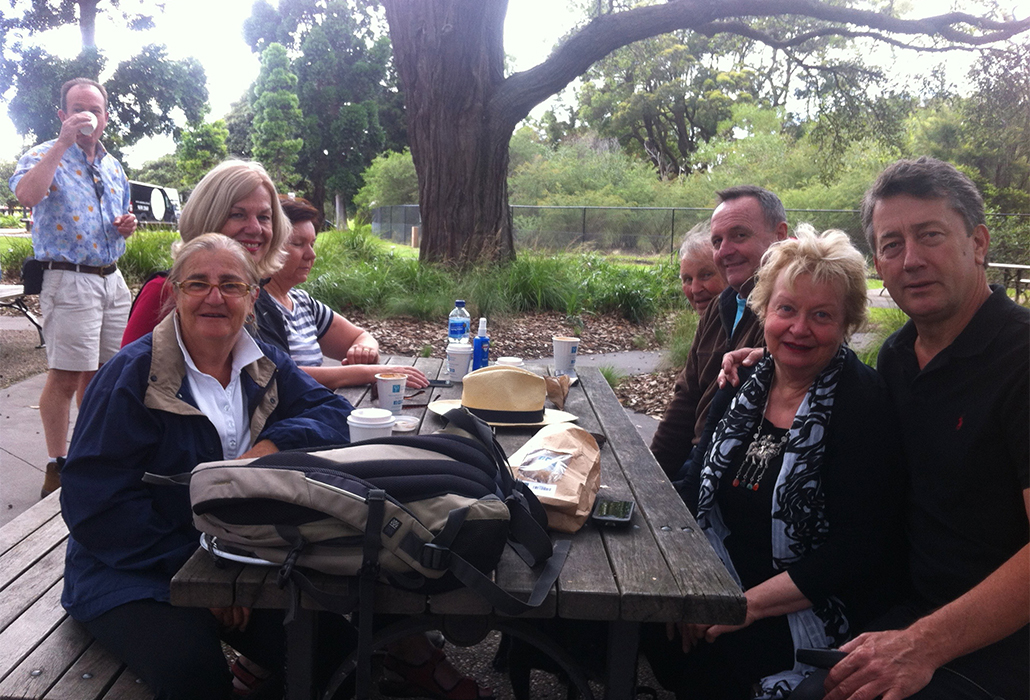 Martyn and Carolyn with all the Centennial Park morning regulars… 13.12.2014

During the last hour before I caught the plane to Sydney to farewell Martyn, I had my initial follow up appointment since my chemotherapy ended. It hadn’t been the best of news.

We have known I was a ‘high risk’ patient from day one as following successful bowel surgery, they had discovered the cancer had escaped outside the bowel into eleven of sixteen lymph nodes.

Results of my latest blood test in early April revealed the marker in my blood, which lets the Doctor how I am going, for some reason was far higher than it ought to be. 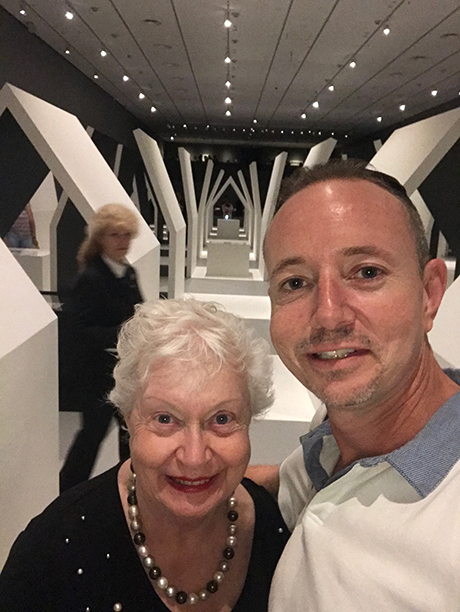 Selfie: Carolyn and Craig McDowall at the NGV: Escher and Nendo

This generally means the cancer is still about, which is hard to accept, because everyone keeps telling me I ‘look so well’.  This however, could also be attributed to having taken to eating tons of raw vegetable with my very small amount of meat over the past six to eight week period, plus lots of fruit and protein nutritious foods like cottage cheese, which have made my skin clear and eyes glow.

In the meantime, I have been having trouble with those eyes. Tests show the cataracts that were quiet have now come down enough to need surgery. Also, I am having difficulties with my teeth.

Losing two molars wasn’t too bad during treatment, they both broke completely out of the gums leaving no trace. However the third expelled a filling my last dentist had hoped would ‘see me out’ on the night prior to my going to Sydney.

This meant in turn the jagged edge began rubbing on the base of my tongue, causing a sore to develop. A lot of pain set in, fortunately waiting until the day after the service.

Thank heavens the dentist’s surgery were able to find me a cancellation within a few days of being back. They have filed it down while I wait to find out the results of further tests. 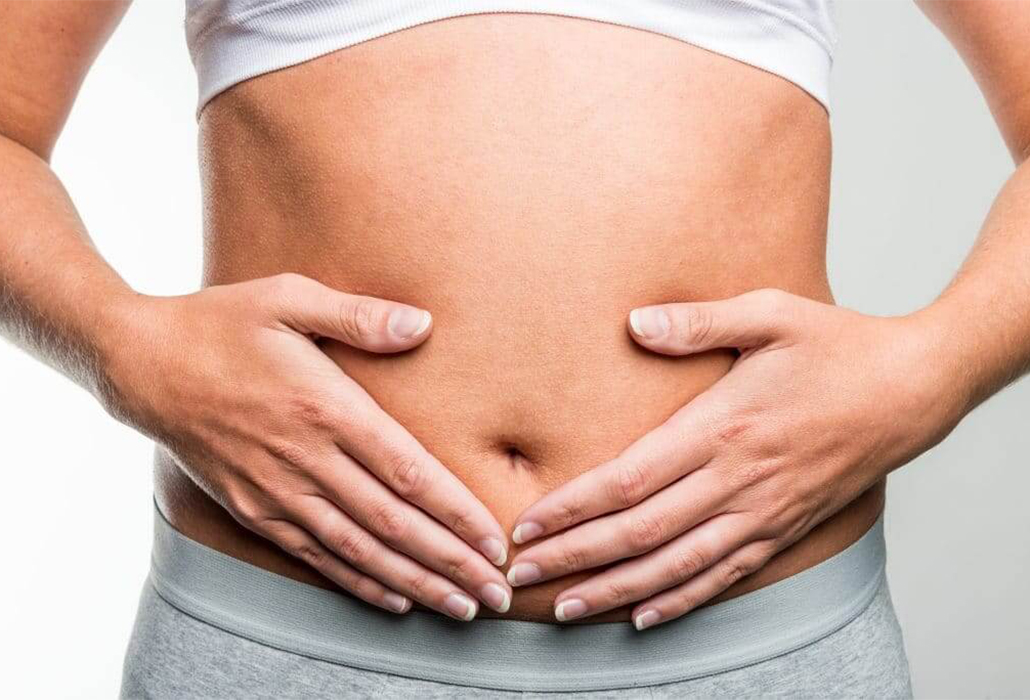 Scans of my torso taken the day after I came back and the day before my next trip to my oncologist, have now confirmed the cancer hasn’t left my body fully.

While we were away the Oncologist arranged for the tumour, removed during my operation a year ago, to be tested.

It revealed exactly what ‘type’ of cancer I have to see if new treatments emerging may have an impact. The CT scans and tests given show a “little burden of cancer”as he described it, meaning I have a few weeks up my sleeve before action really needs to take place.

The type of cancer I have is very aggressive, which does to some extent explain why the chemo did not get it all. There is evidence of “mismatched repair proteins”, perhaps an indicator of “Lynch Syndrome”, a hereditary cancer.

People with this syndrome are more susceptible to colo-rectal cancer, but the good news is this type of cancer has a very high chance of responding to immunotherapy. 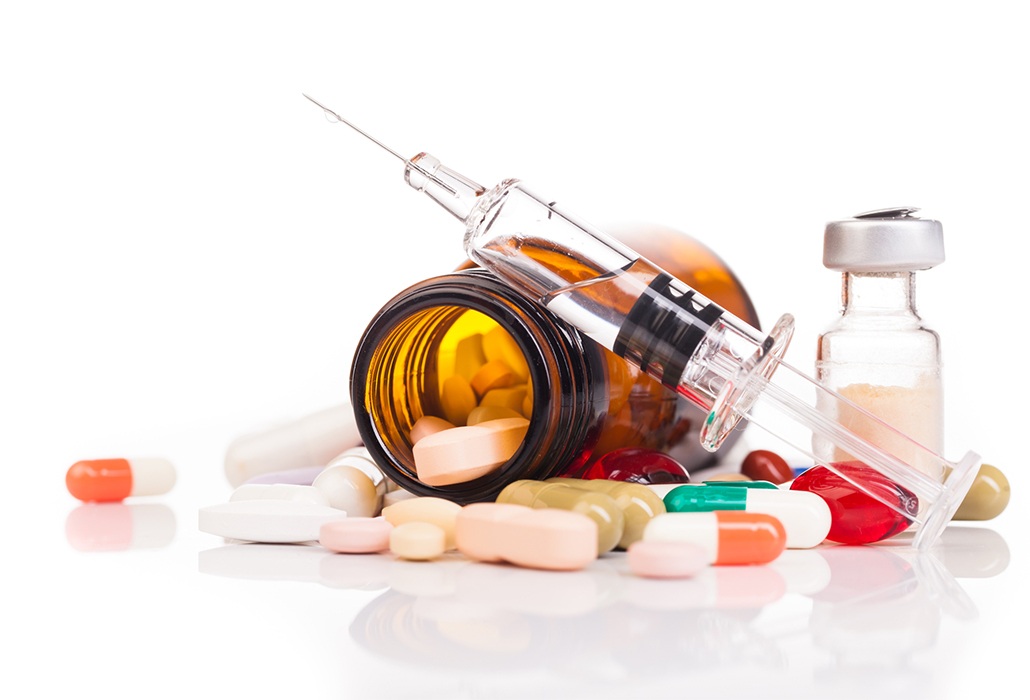 Essentially the cancer has “switched off” my immune system and its ability to attack cancer cells. Immunotherapy turns them back on, ‘waking them up from their inactivity’, so they declare war on the cancer cells, devour and dispose of them. Nothing quite like having a battle raging within!

There is a hitch; immunotherapy is not currently funded by the government and dosage costs are prohibitively high.

For now I need to have the Lynch Syndrome test done in the next week or so, and go back in a month to my Oncologist for my next appointment. Meantime he is working on a way forward. 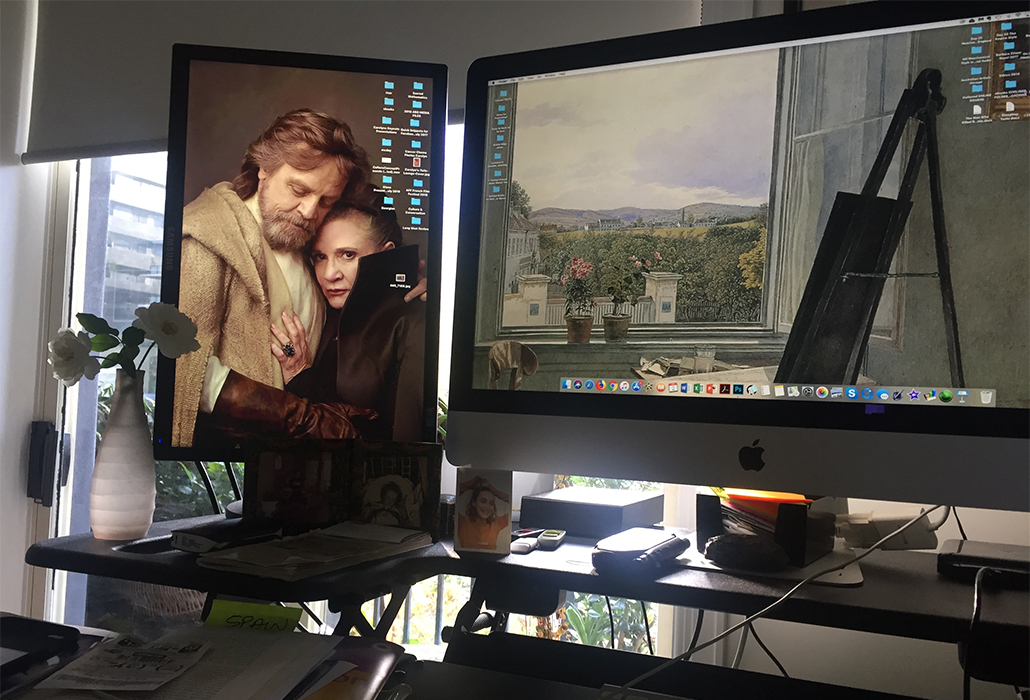 So, after finding out all of this I decided it was time I set a new goal, following reaching my  Star Wars date later this year. This will be to complete three books I have been writing on and off for the past few years.

In the meantime standing here at my Varidesk, I am concentrating on writing stories about, and having conversations essential to, the world of arts and culture.

Everything is possible… wish me luck!