Madonna of the Pilgrims c1604 by Caravaggio, Cavalletti Chapel of the Church of Sant’Agostino, Rome

Jesus of Nazareth is an historical man who is believed by millions to have fulfilled a prophecy that a descendant of King David, the first beloved king of the Judean dynasty of Israel, would arise to redeem his people, introducing harmony in creation.

Jesus was later given the title Christ, which comes from the Greek Christos, meaning ‘anointed one’. The event we call the incarnation (God becoming man and dwelling with us), divided time into before he was born (BC) and after he was born (AD or ACE)

Jesus was the first born child of the virgin woman Mary who was from the tribe of Judah, a descendant of King David. She became the wife of Joseph, a carpenter.

Her son was born in a stable on their way to Joseph’s home town Nazareth in order to comply with a Roman population census.

From around the fourth century in Europe onward the subject of the life and death of Jesus had a major role in the language of art.

Symbols of light, whose form and shape originated in natural phenomena – a luminescent cloud or charismatic circles of light were often used to surround the head, or the whole figure.

This was an essential element in a visual language used by many artists who wanted to deliver or, otherwise reinforce a message to the viewer about what their imagery meant or represented.

So, artists developed many varieties of the nimbus, aureole and halo. Like the use of a crown, light not only characterizes and differentiates a figure, but also distinguishes it. During the late Renaissance period in Italy the artist Michelangelo Merisi da Caravaggio (1571 – 1610) became a master of light in painting. He used light in a new and exciting way, but always in regard to reverence and respect for the meaning of light traditionally in symbolism, which was to exalt or dignify.

His works reflect his own unconventional character. Caravaggio invented complex systems of illumination whose source was always out of view. He enshrined his Madonna and Child (The Madonna of the Pilgrims) against an imposing architectural frame.

Mary was a vision bought to life by the simple faith of pilgrims kneeling before her with her child, whom they believed was the Old Testament Prophet’s promised Messiah, who would come to save the world.

She is approachable, compassionate and very responsive to the sincere devotion of the faithful, the chief message one of hope to all Christians, however humble, whose faith is sufficient. A hint of a halo sanctifies her and her baby. 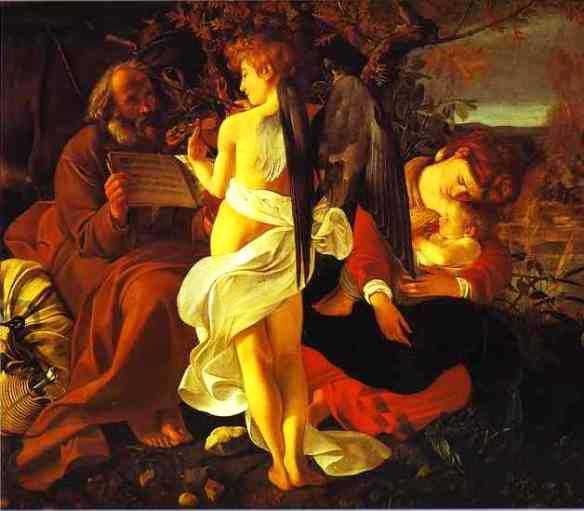 Caravaggio also depicted the Holy Family fleeing into Egypt after being warned Herod the Great was seeking to kill the Christ Child.

This basic story acquired many extra details during the centuries and is based not on any incident in the Bible but on stories from the Middle Ages that sprang from the Bible story. Caravaggio depicts Mary asleep with the infant Jesus, while Joseph holds a manuscript for an angel who is playing a hymn to Mary on the violin. Jesus is believed to have followed his earthly father Joseph’s trade of carpentry, although little is known of his early boyhood and manhood.

When he was only 12 years of age Jesus’s astonished mother discovered him discoursing with great wisdom and knowledge with scribes in the temple. She was reassured that he was ‘about his father’s business’. While she was herself pregnant the virgin Mary visited her cousin Elizabeth, also heavy with the child now known as the prophet, Saint John the Baptist.

Caravaggio portrayed John the Baptist as a passionate young Moses, bursting with vitality but with an emphasis on his inner life, his seriousness, his spirit, not just a mere symbol, but a man driven by his sense of mission to baptize, preach repentance and forgiveness of sins. John had a tragic end at the hands of the executioner who placed his head on a platter and gave it to Salome as a gift from King Herod for dancing for him.

Caravaggio transformed the subject from the realms of uncertainty into one of disquieting reality, one in which her mother, who urged the crime, is a disengaged onlooker.

The youthful Salome herself is turning her head away, seeking perhaps to avoid believing what has been done, her expression not allowing us to know if she was ashamed or simply irresponsible. One of his twelve disciples the tax collector, Matthew recorded Jesus’ genealogy, connection and continuity with the past.

Caravaggio has him being coached by an angelic messenger, who is ticking off points on the fingers of his left hand.

Matthew is depicted in all his dignity with his noble bearded face and bald head, while clothed in robes reminiscent of that of an ancient philosopher. He is in an obvious hurry to record the ‘good news’ about Jesus as it seems he hasn’t even taken the time to sit down, the bench under his knee tipping whimsically over the edge of a ledge.

Baptised by John the Baptist, Jesus spent 40 days in the wilderness preparing for his earthly mission, which began when he was 30 years of age, the traditional age for Jewish men of that time to commence their profession and public life. He challenged traditional religious attitudes, such as performing miracles on the Sabbath and including the resurrection of Lazarus from the dead, great works that from a Jewish perspective would not have been appropriate.

Caravaggio dispensed with an onlooker holding his nose against the stench of the body’s corruption and instead chooses to preserve the dignity of the scene, placing Jesus in shadow, his raised arm the only unbroken horizontal in the scene. He is relaxed but decisive and Lazarus raises his arm in a semi conscious salute while the grave diggers are momentarily blinded by the light of Jesus’ presence.

This is the light that represents man’s quest for eternal life one which would only be made possible through the eventual sacrifice and resurrection from the dead of Jesus himself.

Jesus drove the moneylenders from the temple and preached, what we would probably describe, as a revolutionary Sermon on the Mount one in which he emphasized love, humility, meekness and charity, rousing the Pharisees. He arrived in Jerusalem in triumph and held a ‘last supper’ with his disciples before he was betrayed. Caravaggio’s upper room is well lit, the illumination not without ambiguity as the innkeeper casts a shadow on the wall behind him, but not on Christ, whose face is radiated by an inner light. Judas Iscariot betrayed Jesus who was condemned to death by the Sanhedrin, the highest court and supreme council of the ancient Jewish nation. He suffered flagellation.

Caravaggio lets us feel the savagery of the event, Christ’s helplessness and sense of degradation, and although haloed, the light strikes him fully making him radiant, but he is suffering just like any other man.

Wise men have come to you to give you of their wisdom,
I came to take of your wisdom;
And behold I have found that which is greater than wisdom The confirmation of the sentence of death by Crucifixion, a Roman form of capital punishment enforced by the Roman procurator Pontius Pilate, was obtained on grounds of political expediency, not through any proof of treason implicit in any claim to territorial kingship by Jesus. Entombment of Christ – Taking Jesus down from the Cross, 1602-1603 by Caravaggio, Pinacoteca Vaticana, Vatican City, Rome

Caravaggio has Jesus flanked by the jailer and Pilate, anxious to dispose of the problem created by this man whom he cannot believe has committed a crime. However, responding to the cries of the crowd he sends him to the Hill of Calvary, the city rubbish dump to be crucified, nailed through the wrists and feet.

Caravaggio is letting us complete the scene by imagining ourselves as part of a snarling, condemning mob. Christ in all his nakedness bears the crown of thorns and carries the implement of his flagellation as a King would bear a sceptre. He is sorrowed and shamed, but not for himself, but rather for man’s continuing capacity for inhumanity.

Removed from the cross and then entombed his whole life was to become a daily living experience for the followers of his way.

Caravaggio’s Christ is being gently born from the cross to its tomb by two members of the grieving group around him. Nicodemus is embracing Christ’s legs, Saint John touching Christ’s wound, while his aged mother Mary blesses him, extending her arms to embrace the whole group. The Increduilty of Saint Thomas, by Caravaggio 1601 – 1602, Sanssouci, Potsdam

Caravaggio’s resurrected Jesus is a man made of flesh and blood, not a disembodied spirit. This means his resurrection is apprehended in literal terms, and is therefore all the more miraculous. The doubting disciple Thomas is flanked by the other two disciples whose hands are concealed as they do not question Christ’s identity.

Thomas is carefully prodding the wound in Christ’s side because he, like many still do, doubted Jesus’ authenticity. He refused to believe in the resurrection until he had placed his own fingers into Christ’s wounds. ‘Because you have seen me, Thomas, you have believed; blessed are those that have not seen and yet have believed’.

Christine Douglas will produce The Marais Project’s hit CD ‘The Lady Sings the Viol’ as a Cabaret performance, The Independent, North Sydney on August 24 2013