American photographer Carleton Watkins (1829–1916), during the nineteenth century, captured the essence of the World Heritage site Yosemite National Park in California. Dedicated as a park for the benefit and enjoyment of the people, Yosemite is all about conserving the scenery and wild life of nature unimpaired for future generations to enjoy. Its Upper falls still cascade spectacularly down the mountain side today as they have done for centuries. In an exhibition now showing at The Metropolitan Museum of Art in New York until February 1, 2015, a suite of photographs taken in 1861, reveal Carleton Watkins first encounter with Yosemite’s spectacular and truly sublime topography. This collection is usually housed in a unique album held at the Special Collections Library at Stanford University. 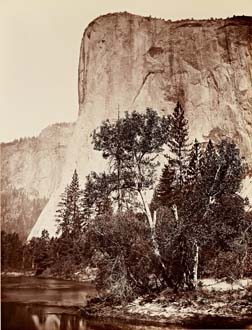 The grandeur of Yosemite and its granite cliffs, grasslands, glacial valleys, massive rock faces, great tumbling waterfalls and majestic trees never fail to impress. Carleton Watkins captured Tutocanula, or El Capitan at 3600 ft, as it towered over the valley in his day. 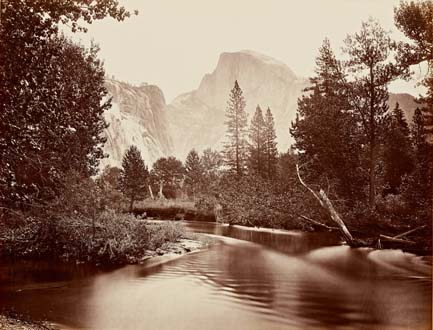 One of the highlights of the show is his photograph of Tasayac, the Half Dome, which is one of the most dominant geological features of the valley, rising 8,842 feet above sea level and some 4,800 above the valley floor. To take his amazing shots, Carleton Watkins had to travel through Yosemite’s steep and often hazardous terrain, with mules carrying his equipment which in the early days of photography was considerable. He was so successful at capturing the breathtaking beauty and extraordinary way nature shapes our landscape, that President Lincoln was inspired to sign a bill on June 30, 1864 to declare the valley inviolate, establishing a blueprint for the National Park System in America today. 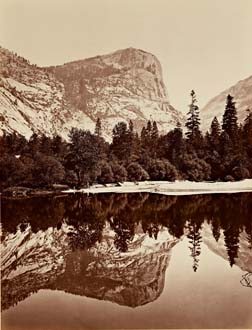 Lincoln’s decision was all about hope, giving people who were at the time embroiled in the horrors of Civil War, a ‘progressive goal to share with the republic’. He advanced the notion’ Yosemite was truly a ‘Pacific paradise, a bit of Eden in North America’. Carleton Watkins: Yosemite is organized by Jeff L. Rosenheim, Curator in Charge of the Department of Photographs at The Metropolitan Museum of Art New York, November 3 2014 – February 1, 2015