Where would we be without glass? There would be no radio, no electric light, no television, no cinemas or cameras and perhaps we would all be peering through spectacles of horn, groping forward into a permanent Dark Age?

So we all agree I am sure that glass is one of the great inventions of human kind.

Within the scope of its wide-ranging development there are a great many stories worth telling, especially about art objects made of glass.

The lack of real evidence as to the origin of glass only lends to its mystique, as well as the romance surrounding it. The art of glass making has been practiced on the island of Murano in the Venetian lagoon since 982, when the first document in which a dominicus fiolarius, or glassmaker appears.

By 1224 a flourishing industry existed for it is in that year the first Venetian Glassblowers formed a guild or arte and glassblowing was practiced without any major interruption for centuries, surviving the many and varied vicissitudes of Venice’s long history.

Three hundred of Scarpa’s greatest glass works, many from private collections will be showing alongside other works of art in the collections, especially objects that inspired him. This includes Chinese Qing porcelain, ancient Greek and Roman cast glass and nineteenth century vessels blown as in earlier times.

Scarpa, who was also influenced by materials, nature, and his culture’s own history, founded the Venini Glassworks in Venice to modernize ancient Venetian traditions of glass blowing, which had reached a pinnacle of achievement by the 17th century. 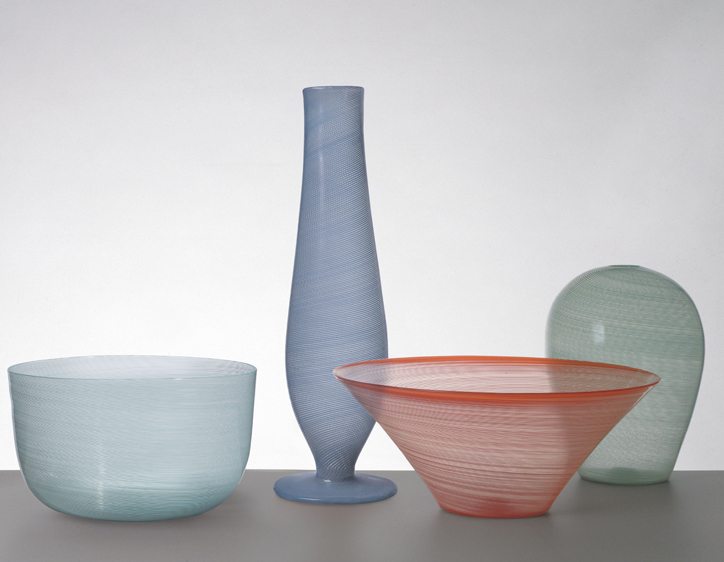 The complex technique of filigree, still in use today, dates from 1527 and is linked to the name of the Serena glassblowers, who obtained a ten year franchise for producing glass a facete con retortoli a fil; crystal decorated in parallel bands with threads of milk glass or coloured glass twisted to form spiral patterns.

The term filigree becoming generic for different types of glass decoration incorporating glass threads. The most successful version vetro a reticello, dates from the sixteenth century when slender canes of opaque white glass were laid in crisscross pattern to form fine netting, with a bubble of air in each lozenge. 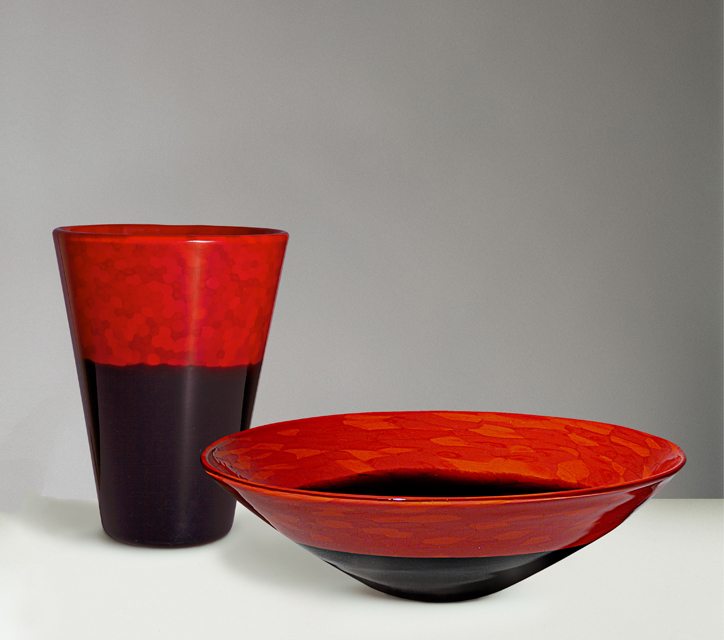 They were all designs deeply inspirational for Scarpa, who became renowned for taking the ancient techniques and reimagining them for the modern world, pushing their technical limits beyond the boundaries of known production methods.

The unique property of man-made glass is that it lacks the crystalline structure normally associated with solids, retaining the random molecular structure of a liquid.

Only as it cools does it become rigid without setting up a network of interlocking crystals, which is why it shatters so easily.

It must be reheated and uniformly cooled after manufacture to release internal stresses induced by uneven cooling.

As temperatures rise it progressively softens until it goes back to being a thick syrup.

Wineglasses with “dragon” stems were first made at Venice during the late sixteenth century.

They were widely produced in the Netherlands and elsewhere in Northern Europe by the middle of the seventeenth century.

Due to their excessive fragility many early examples are relatively rare.

For over three centuries from the thirteenth to the sixteenth centuries in Venice as the fame of the glassblowers of Murano spread, so did the desire by other countries in Europe to discover their secrets.

Rigid regulations and harsh penalties were enacted by Venice in order to punish those who transgressed the laws, forbidding them to leave the island of Murano.

They were prisoners of the state.

Despite the threats the artistic and legendary achievements of the glassblowers were not hampered, evidenced by the unparalleled heights of sophistication and elegance they achieved.

Having grown up in Venice where glass making is an integral part of their DNA, and having spent much of his childhood in nearby Vicenza, which is steeped in all the traditions of Graeco Roman architecture, Carlo Scarpa became a ‘professor of architectural drawing’ after studying architecture at the Acccademia di Belle Art, Venice. Glass was a personal passion for Scarpa and between 1926 and 1932 he worked at the M.V.M. Cappellin glassworks, which were eventually closed due to bankruptcy.

He established the Venini Glassworks between 1932 and 1947 to redefine the possibilities and parameters of glass manufacture.

He experimented with textures, exploring colour and pioneering new techniques.

Bollicine was named after bubbles of air trapped inside the objects form, which included a watery appearance because of the large amount of crystal it contained. Mezza filigrana was all about making the glass as fine as possible without it breaking.

Radical in nature, his glass pieces went far beyond being perceived merely as decorative or utilitarian objects.

They attracted the attention of critics when he put them on display at the Milan Triennale and the Venice Biennale during the 1930’s and 1940’s when he wrote that “this production is really at the avant-garde of modernity.” Bottle, glasses, tray, and small bowl in clear uncolored a spirale glass with aquamarine (acquamare) decoration ca. 1936 Lent by The Steinberg Foundation, Courtesy of The Corning Museum of Glass *Part of the A Cerchi, A Fasce, A Spirale Series, ca. 1936-1938

During 1936 Scarpa began collaborating with the Venini glassblowers on murrine romane, which was all about reinterpreting the ancient Roman tradition of joining together small tiles, or murrine, of glass but this time with a modern twist.

There are fewer than twenty known existing pieces of murrine opache, several of which will be on display in this exhibition.

The experiments Scarpa undertook at Venini from 1932 to 1947 combined exacting standards of skilled craftsmanship in a wonderful variety of works that reflects and embraces our love of this magical substance.

All Italians must be pleased as his wonderful works are showcased at the Metropolitan Museum in New York.

The Metropolitan Museum of Art

The exhibition is an adaptation of Carlo Scarpa. Venini 1932–1947, organized by the Fondazione Giorgio Cini, Venice, and Pentagram Stiftung for presentation at Le Stanze del Vetro, Venice, in 2012, curated by Marino Barovier.

The show is accompanied by a fully illustrated catalogue, which provides a complete record of the glass works created at Venini during Scarpa’s tenure as an artistic collaborator.

There was a breathtaking moment during the first hour of the 5pm Sunday performance of the Pinchgut Opera’s 2010 production of composer Franz Joseph Haydn (1732 – 1809)’s L’anima del filosofo, Orpheus + Eurydice when I became aware of a most beautiful moment of stillness yet attained by any audience I have ever known at the Opera.

It seemed to me as if it was collectively holding its breath so as not to disturb the sheer beauty and depth of the emotional intensity attained in a duet being sung so superbly by the lovers Orpheus and Eurydice portrayed so brilliantly by soprano Elena Xanthoudakis and tenor Andrew Goodwin. Their voices blended into a moment of such perfection that it was truly hard to comprehend and for me, quite literally hard to come to terms with. It felt like dying and going to heaven all that the same time.