Carol, (2015) a film from The Weinstein Company is an honest tale eloquently told of the love that dared not speak its name at a time, and in an age, when Americans were enjoying a greater affluence than anywhere else recovering from the economic difficulties following WW II.

Haynes draws us cleverly into scenes of strained family and youthful heterosexual relationships in the world the two women in our story inhabit. By setting his film in period, Haynes is intent on making us address and come to terms with the totally skewed morality of early 50’s society. It was a time when apron clad women were idealised as being at home happily baking cakes all day, reflecting a scene of domestic bliss.

Any form of same sex relationship was considered as not only indulged in by deviants, but also a matter for psychiatrists, shock therapy and in the case of some men, chemical castration.

Magnificently realised there is great attention to detail as the story unravels elegantly, as seen through rain covered taxi windows, intimate and artfully composed close-ups and by using obscuring devices.

Cate Blanchett as an actress knows that less is more. She is as promised incandescent; glowing deeply from the inside out, she illuminates every scene.

Completely mesmerizing as Carol Aird, stunningly clad in tailored suits, fabulous furs and wearing wonderful jewellery, she is busy negotiating her way through life in an age when women were seen to be the property of the men in their lives and meant to do as they were told.

The aesthetics of her performance as  Carol are superbly crafted. She is a beautiful, assured and confident woman, living in an impressive and very tasteful stone mansion with her daughter Rindy. She loves Rindy unconditionally, although she is denying her humanity to remain part of her adored child’s life.

Carol is able to move with ease in any social circle, knowing always what is the right thing to wear and the right way to act, especially when despite being separated from her husband she’s still expected to accompany him to family and business events. Rooney Mara could not be more perfect, as the beautiful and vulnerable young sales girl Therese Belivet, who is working in the toy department of a fashionable Manhattan department store.

She has a hidden desire to be a photographer and meets journalist Danny McElroy (John Magaro), who urges her to put together a portfolio and start her career by applying for a job at The New York Times where he can put in a good word for her. That is until perhaps the moment she sees Carol across the crowded toy department, with her perfectly coiffured blonde hair, penetrating eyes and brilliant smile. It is indeed a perfect love at first sight moment for them both.

This was not an age when sex was discussed in any context. Most girls were given a book and like the boys, waited to be told, only to have to find out by fumbling embarrassingly through often appalling early experiences.

Carol engages Therese in conversation about suggestions for a present for her daughter, eventually purchasing the recommended train set. Intrigued Carol finds herself wanting to draw her out, but all Therese can do is respond with halting indifference wanting to hide her immediate connection and emotion.

It’s so evident, one that lights a fire you know is not going to be easily extinguished once it has taken in a little air Carol accidently leaves her leather gloves on the counter, which gives Therese an opportunity to follow the trail to her home from the sale and return them by post.

Phoning and offering to take Therese to lunch to say thank you, slowly Carol and her new found love settle into an easy friendship, one that will define their future.

They are so comfortable together it enables them both to either sit in silence or engage in lively conversation that is unforced ub abt wat and doesn’t seek to define or put into words what it is they are seeking from each other.

Carol is married to and separated from her husband Harge (Kyle Chandler). A successful businessman (he has a chauffer), Harge wants to salvage his strained marriage, despite his wife’s skewed desires

Harge is aware of a brief affair she had with her very fine friend since childhood days Abby Gerhard (Sarah Paulson) years ago and it haunts his whole persona.

He insists on taking their daughter Rindy to have Xmas with him, leaving Carol alone and so she invites Therese to her house on Xmas eve.

Harge arrives unexpectedly, finding them both laughing and enjoying each other’s company.

He is immediately suspicious, jealous and angry all at once, insisting Carol come away with both he and her daughter for Xmas, but she refuses.

In reality he’s appalled he would have married and had a child by the woman she has turned out to be. His response is all about raging against his own circumstances, which can only turn to cruelty.

He uses Rindy to emotionally blackmail Carol to stay with him or he will expose her homosexuality so that he can gain full custody. Distressed, upset and overwrought after he has left Carol drives the inwardly upset Therese, who has witnessed them raging at each other, to the train station.

Carol phones later to apologise for how events unfolded and invites Therese to come on a road trip with her. Richard arrives as she is packing and is appalled Therese is going off on a holiday with this woman she hardly knows.

Alarmed he demands an answer to his proposal of marriage, which she declines, bringing their relationship to an end leaving him puzzled about what is really going on. Carol and Therese go away together and are having a blissful time in each other’s company. They exchange Xmas gifts.

Carol has given Therese a brand new Canon Camera with a zoom lens and lots of film. Therese gives Carol a recording of Billie Holliday singing the tune that was playing when they first met.

Travelling from place to place together and staying overnight in a variety of accommodation, they have separate suites at first. Then there is a shared Presidential suite in another motel where nothing happens.

Finally in one unattractive motel in Iowa, aptly named Waterloo, they are united at last in a scene of unabashed tenderness and love.

As they both shatter the patina of restraint that had previously stopped them from taking the final step, they enjoy a night of completely unrestrained love making for the first time. We are also aware there will be consequences.

Unbeknown to Carol, Harge has had them followed by a private detective, who pretended the day before when he met them both to be a travelling salesman. Now they know he was confirming who they were before seeking evidence of Carol’s skewed infidelity. 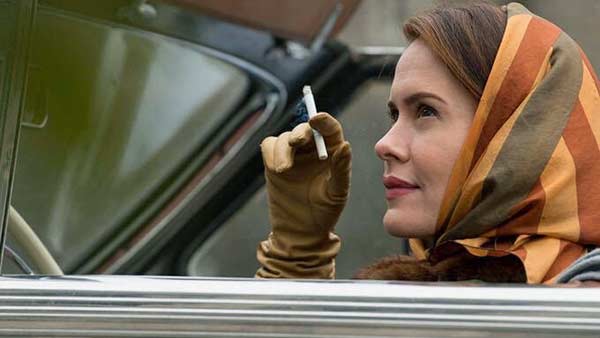 Carol confronts the detective with a gun and he tells her he has already forwarded the tapes to Harge. As the proverbial hits the fan, Carol flees, phoning Abby to come and help. She flies in overnight as requested to drive the stricken and totally distraught Therese back home.

Back in New York Therese tries to phone Carol who does not answer, threatened with never seeing her child again.

Bitter and sad Therese picks herself up, gathers a portfolio of her photos and gains a post at The New York Times. Some of the stunning images she has taken of Carol help to secure her the job.

Meanwhile Carol is seeing a psychotherapist as a last ditch attempt to stay with Harge and in Rindy’s life. However she soon realises and admits to Abby that she has come to terms with giving up custody of her child rather than live the rest of her life as a lie. The frustration she feels forces her to overcompensate with her child, smothering her with love which is not healthy for either of them.

Fighting for visitation rights, supervised or otherwise, she poignantly confronts the male lawyers, telling them all and her husband she will not deny her own true nature.

She begs Harge not to take their case to court for if he contests her offer it will get ugly and she pleads with him that they are not ‘ugly people’. Knowing now she wants to live in a relationship with Therese she sits and writes her a letter that is both wise and wonderful, inviting her to come and live with her.

There is an extraordinary depth to both their performances and the final scene, as Carol and Therese lock eyes across a crowded room, packs an emotional punch powerful in the extreme.

Like a triumphant note of emotional clarity Carol, a love story from the past, speaks stirringly and unmistakably to the present.