He’s famous. He’s gorgeous. He’s smart as hell. He is a mystery novelist… and he is hot on the trail of real world criminals At Comic Con International at San Diego each year they have panels of protagonists from many popular TV Shows. When fictional novelist Richard Castle aka Nathan Fillion came out onto the stage the American TV Guide reported the cheers were deafening. They declared that he had proved he was King of Castle and of Comic-Con.

I really am ruggedly handsome, aren’t I? 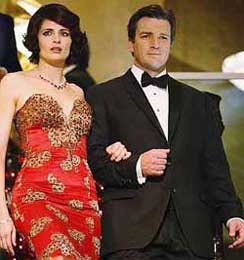 ‘Solving murder has never been so much fun’ is just one of the great by lines for the award winning American ABC production Castle, which is surely one of the most entertaining shows on television. Its two main characters won the TV Guide Favourite Couple Award for 2011. If you haven’t yet caught up with it you should. It’s all about enjoying close encounters of the murderous kind and the producers tell us, it is when ‘fiction meets friction’.

Every writer needs inspiration, says Rick, and I have found mine. After a serial killer imitates the plots of a successful mystery novelist and man about town Richard “Rick” Castle obtains permission from the Mayor of New York City, who’s a friend,  to tag along for research purposes with an NYPD homicide investigation team. One tough savvy female cop Detective Kate Beckett leads them.

Becket to Castle:
If I give you an order I expect you to obey it

Kate Beckett is a detective with the Twelfth Precinct Homicide Squad of the New York City Police Department. She works there with fellow detectives Javier Esposito, Kevin Ryan and her friend, medical examiner Lanie Parish.

Castle: Relationships aren’t math problems. You don’t solve them by being practical.

With tongue in cheek Rick Castle buys himself a bulletproof vest and has it marked ‘Writer’, instead of Police, so that he can accompany his new found friends on raids. Although Beckett tries to get him to stay in the car.

Castle comes complete with a very colourful past and reputation forged when he was caught riding a stolen police horse naked through Central Park. Beckett has the enviable task of trying to keep Castle in line and their interaction plugs into the emotions of its many fans and followers around the world because they have a chemistry that works. Together they catch killers. Periodically Castle plays poker with other well-known writers. They always discuss his current case and tease him about his involvement with Beckett.

In reality the writers playing themselves include Dennis Lehane, James Patterson, Michael Connelly and the late Stephen J. Cannell.

When Cannell passed away in real life in September 2010 after filming just one of the games, the characters keep an empty chair at the poker table in his honor, stating they will do so for a year.

Castle: You know what I thought when I first met you? You were a mystery I was never going to solve. 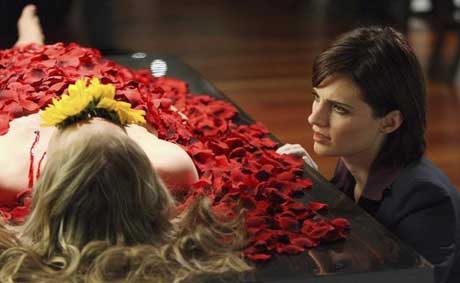 This well scripted, beautifully produced and cleverly directed production is a great success.

It is just entering its fourth season, which is no mean feat for any show these days. With the huge investment involved it means the producers and cast must gain and keep their ratings if they want to continue.

Keeping the romance, the action, the fun, the relationships, the mystery, romance and the delightful dialogue fresh and interesting at all times, is a terrific feat especially over 21 odd episode seasons.

“This is Detective Castle to all units: That’s a negatory on the backup. This dirt bag’s all mine.”

The success is really down to the writers of this fun, suave, sexy, sophisticated set of endearingly upbeat shows, whose intelligent, sometimes intellectual and always witty scripts both captivate and stimulate. Some of the writers are also investors and producers, which helps to keep their motivation intact. To date they have produced some terrific tales, which various talented directors have honed to what sometimes seems like perfection.

Am sure many would give this show, as it ended Season 3, a rating of ten out of ten. Castle: Maybe she was killed by an alien – just an illegal alien.

Esposito: Castle, just prove that ET did this, please.

A strong supporting team of characters integral to the show ably backs up and supports the two main protagonists. Lanie Parish (Tamala Jone) is a friend of Beckett’s and the upbeat M.E. (Medical Examiner) who is covertly having a relationship with Javier Esposito (Jon Huertes). He and Kevin Ryan (Seamus Dever) have Beckett’s back and are her right hand men on the move. They tend to tease and taunt her, while treating her just like one of the guys. Some of their lines and actions have indeed been memorable 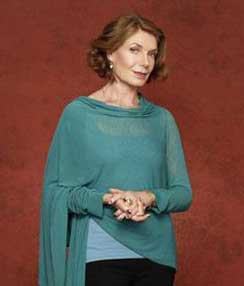 Castle: We’ll have them over for dinner. We’ll schmooze and impress them.
Martha: Would you like me to cook something? Castle: No, we want to impress them.

Intelligent, and ever stylish veteran actress Susan Sullivan is Castle’s glamorous free-thinking mum Martha Rodgers. She has had a career in theatre both on and off the screen. Scenes with her make for some marvelous moments as she constantly delivers, and wears her pearls of wisdom.

Martha: Doing the crossword in pen? Feeling cocky today, are we?
Castle: What is life without challenges? 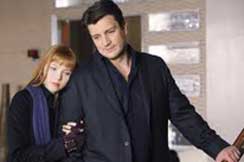 Martha lives with Castle who looks after her, as well as his fiery red head daughter Alexis played by Molly Quinn. Alexis regards herself as the adult in the trio. Now 18 she has been growing up living a lavish lifestyle while being involved in the drama filled action that takes place in the fabulously renovated loft apartment that is Rick’s Castle.

When she brings her first boyfriend home he goes into the traditional father spin.

Castle: I can’t believe my little girl is going to Prom. My only comfort now is the long standing tradition of torturing the boyfriend

Alexis is blossoming into a very beautiful young lady who knows her own mind and gives her dashing dad, Rick Castle a run for his money in Season 4. Alexis to Castle: If you’re so interested in what I’m doing, maybe you should ask your phone. I’m sure there’s an app for that.

Castle and his family live in a terrific loft style apartment, which boasts an open kitchen, floating staircase and modern metallic kitchen. The exterior shots reveal it is clad in brown(sand)stone a very popular building material during the 19th century in many cities in America. Brownstone row houses and apartments are today worth a great deal of money, especially those in Manhattan. So it’s just the place a successful writer would choose to live. 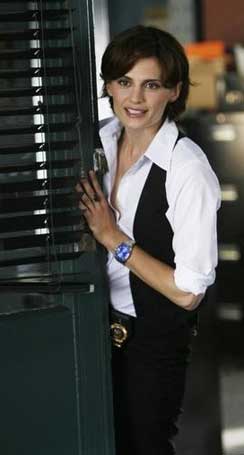 Martha: For a man who makes his living working with words, you sure have a hard time finding them when they count. 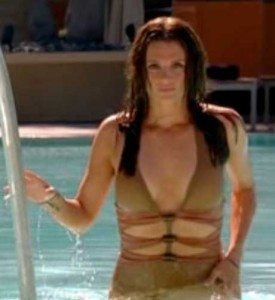 Beckett having a hot Ursula moment

Castle is not really ever stuck for words and, as a writer has already produced many novels around his character Derrick Storm. Inspired by his relationship with Kate he makes her the heroine in his Nikki Heat Novels.

Castle to Beckett: I am still amazed at the depths of your strength, your heart and your hotness

Now here’s the thing. The writers have given both Rick and Kate their own blog and also have written and published the Nikki Heat novels, with their fictional character Rick Castle as the author. They are Heat Wave, Naked Heat and Heat Rises. The first editions were a great Christmas gift 2011 for my eldest son.

Castle: There are two kinds of folks who sit around thinking about how to kill people: psychopaths and mystery writers

In the last few episodes of Season 3 Castle helped Beckett as she tried to catch her own mother’s killer. Many of the events surrounding this happening made him fear for her safety, especially after their favourite mentor and friend Police Chief Roy Montgomery is shot. 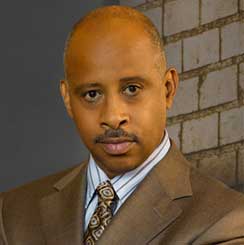 Castle: They’re going to kill you Kate, and if you don’t care about that, please think about how that’s going to affect the people who love you.

Beckett: And what about you Rick?

Castle: Well of course I don’t want anything to happen to you. I’m your partner I’m your friend.

Beckett: Is that what we are? In the dramatic tension filled last minutes of the final episode of Season 3 of Castle Kate Beckett is shot while delivering the eulogy at the funeral of their boss, the man she Castle and the whole team admired. Captain Roy Montgomery was played sensitively and convincingly for three seasons by Ruben Santiago-Hudson.

As she fades fast in Castle’s arms he confesses he loves her. The big question after the finale was is Kate Beckett actually dead? But the Season 4 preview has her on a trolley in a hospital being raced into surgery. 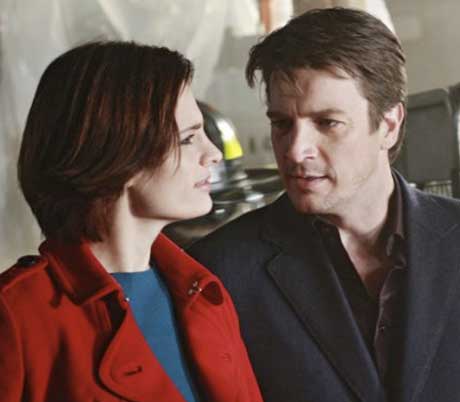 As Stana Katic was not on the panel for Castle at Comic Con we were left to deduce that she dies – does she live – much more like it. She will come back from near death and work with her team to solve the rest of the puzzle.

At Comic Con Fillion said “It hurts right here” placing his hand near his heart. And, as Beckett said Castle, the truth…the real truth… is out there.

Whatever happens to continue to keep the two lead characters apart during Season 4 is the writer’s aim.

But wait, now they are half way through there has been a cliff hanger episode and they are both in a car diving into the murky waters of the harbour.

Will they save each other? What is Pandora?

The two part event continues… so they must be rescued.

And then there are the ‘best moments’ so far from Season 4, all on You Tube

Castle – well its a classic in the making really, much like Bruce Willis and Cybil Shepherd in Moonlighting was in the late 80’s. Just love it.

Rembrandt in Southern California, on view in museums throughout the state, is a virtual exhibition of paintings by 17th century Dutch master of art, Rembrandt