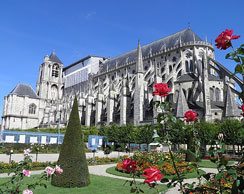 In 1195 a new cathedral was built at Bourges, which was to epitomize the great objectives of the Gothic ideal; to use light to show the greatness of God; to use geometry and mathematics to create spatial and emotional harmony, and to create the Pilgrim’s goal, heaven on earth. Twenty first  man with his huge scientific and educational advances does not expect his buildings to give the same spiritual guidance or to have such dominance over his life as his medieval forbear. However he is just as competitive and is still searching for inner peace. 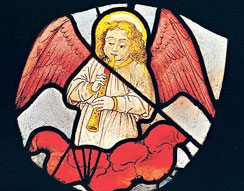 The Cathedral of St. Etienne, Bourges is a French Gothic Cathedral of importance historically and it influenced later Gothic buildings. Its thirteenth and fifteenth century stained glass is of singular beauty both inside and out. Bourges was an important, prosperous and privileged town and its cathedral makes a moving impression because of its perfect expression of the Gothic impulse to verticality, the pyramidal composition of its forces and the integration of every element into an overwhelming unity.