The latest newsletter from the RSA, London has a focus on connecting communities and public services by offering support for local practice in community engagement and social inclusion. Reports about how an important ongoing dialogue has been put in place to turn a forward thinking model for using established buildings and communities to address pressing social needs in that city, identifies cathedrals as being at the heart of the issue. Subsequently The Cathedral Innovation Centre has been established. This business, a charity and a cause, makes cathedral space available to local start up businesses so once again, it becomes an enterprise hub.

The RSA’s support is commendable. What they are endeavouring to do is give the church an opportunity to respond to economic and social challenges in modern times by becoming a social laboratory for changing community attitudes to people needing a helping hand. Many of them due to tragic events would not have a family support network to help them meet everyone else on a level playing field.

Having a place to be is an important need of human society as a whole. Living a nomadic life where security and shelter gradually became paramount,  saw humankind establish its first towns and then cities.

Expanding commerce is at the heart of the success of western civilisation.

Of all the buildings in our community here in Australia surely great cathedral and church spaces are among the most under-utilized these days in terms of community, save from worshipers at service times and tourists in the daytime. 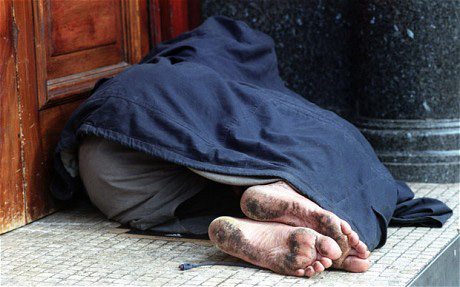 While that serves a purpose in spreading the message of Christianity for the people who make up the church, a visible sign of Christianity in action would also be helpful.

Seeing people sleeping rough in a Cathedral porch is heart-wrenching stuff, something that should never be acceptable to anyone in modern society.

Living in a great Cathedral precinct in Brisbane for five years as a lay-person while also working as a Cathedral guide interacting with the public on many levels (2000 – 2005), offered me both a rare opportunity for social interaction and to observe faith in action first hand.

It was indeed a humbling experience talking to and endeavouring to help many of the people who came there seeking assistance.

What they all had in common was a lack of personal and emotional support, the very thing that we all need the most if we are going to have a reasonable life.

One of the projects I was keen to implement was offering the great nave as a place to be for those groups of people endeavouring to find shelter by using some parts of the Cathedral’s grounds at night.

In making the suggestion I knew the Cathedral and many other churches in San Francisco already offered this service and so there was a precedent allowing those in charge to commence a useful dialogue within their own community.

It would have given them a place to be, one where they could bed down for the night out of the severest winds and cold nights at least during the autumn and winter season. It was an idea hopefully that would be brought to fruition by a few people at the time who supported it. However the whole focus was on ‘completing the last Gothic Revival style cathedral in the world, which did not happen until after I had left (2006) with subsequent upgraded services and so it became an idea just ‘too hard’ to implement, at least at that time.

From 5th – 15th century Europe when cathedrals were being built an important aspect of the original intent of having a large nave was to provide security and help for the community they served.

If 1000 people lived in the town it was built to house at least that many souls.

At Amiens in France the entire population of the city of 10,000 people could fit into its great cathedral, which covers some 7,700 square meters.

It would not only shelter and save them in times of attack or storm and tempest, but also offer them a place to hold their markets in inclement weather and to conduct important community meetings and law courts.

The ‘chancel’ is architecturally historical, an elevated area where a person in authority would stand to be seen by all. The Cathedral’s association with law and order, still celebrated in annual church services today, means that the Cathedral has always been a place where hope sprang eternal. It’s taken a long time to break down entrenched attitudes among congregations that ‘commerce’ is something other people are involved in and that working for money was not a topic for ‘nice’ church people to talk about.

It’s good to see that a great many churches today are now embracing the idea of using their buildings as unique venues for anything to do with benefiting the community; from farmer’s markets to music and flower festivals as well as concerts and boutique wine, showing that their great unencumbered spaces and architectural integrity makes them very attractive spaces to share.

New ideas for using great sacred spaces will almost always meet opposition and we would all acknowledge they need to be considered carefully as change for many is still a very difficult thing to both deal with, surmount and embrace.

Change is good when it provides a benefit for the greater good and without change there is no way to keep our society moving forward.

The RSA has been a source of ideas, innovation and civic enterprise for over 250 years. In the light of new challenges and opportunities for the human race our purpose is to encourage the development of a principled, prosperous society by identifying and releasing human potential.

This is reflected in the organisation’s recent commitment to the pursuit of what it calls 21st century enlightenment. Through lectures, events, pamphlets and commissions, the RSA provides a flow of rich ideas and inspiration for what might be realised in a more enlightened world; essential to progress but insufficient without action.

RSA Projects aim to bridge this gap between thinking and action. We put our ideas to work for the common good. By researching, designing and testing new ways of living, we hope to foster a more inventive, resourceful and fulfilled society.