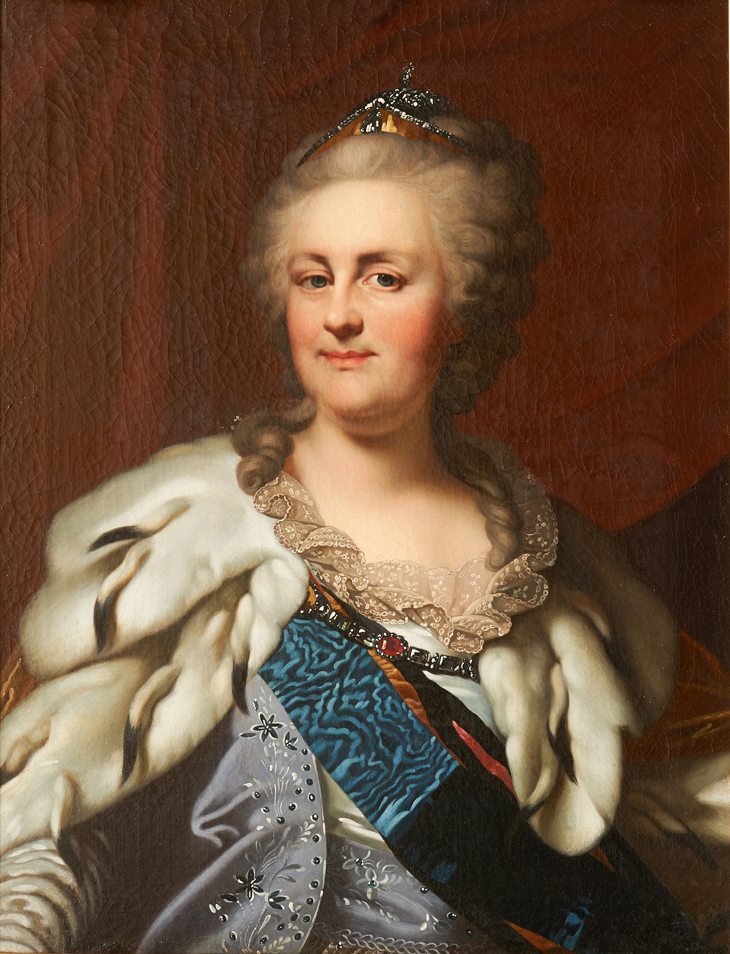 Collector David Roche AM (1930 – 2013) of Adelaide, who left his treasures to the people of South Australia in 2013, gathered wonderful Russian objects as part of his great collection, including a portrait of Catherine the Great exhibited by the David Roche Foundation House Museum.

“Vlad was the consummate Russian speaking guide said Martyn Cook, “… he allowed us to discover Moscow and St Petersburg from top to bottom, front to back. From the ballet to the opera to house museums and state museums, every trip was packed full of surprises. Six trips later nothing has changed in regard to the surprise element that Mother Russia is. She constantly amazed and David Roche loved it and so accordingly his collection houses some 59 Russian objects from pottery to Faberge.” he said.

Attributed to Johann Baptist Lampi the Elder (1751-1830), the late eighteenth century portrait of Catherine the Great (1729 – 1796) is an oil on canvas and is in a bespoke gilt-wood frame incorporating The Empress’ Imperial Coat of Arms. Its Provenance is impressive – 7th Count of Villagonzalo, Mariano Miguel Maldonado y Davalos (1851-1901), Spanish Ambassador in St Petersburg 1893-1897 and by descent to an important aristocratic collection in Spain. Count Villagonzalo established a close friendship with Tsar Nicholas II during his period in office in St Petersburg. In 1899 he was awarded the Imperial Order of St Alexander Nevsky.

He is mentioned in the Tsar’s diaries. “Saturday 20th April, 1896. The day was marvellous and bright. The two of us went on a short walk and found masses of anemones. After breakfast I received Count Vollagonzalo, previously the Spanish representative, now the ambassador here.”

Another portrait in the collection is by Robert Jacques Francois Lefévre (1755-1830) who recorded Anatole Nikolaievich Demidoff (1813-1870) when he was 7 years of age in a red military uniform.

Anatole Nikolaievich Demidoff, 1st Principe di San Donato, was born in Moscow in 1813, and was one of the most significant, influential and eclectic industrialists and connoisseurs of his era.

Having lost both parents when he was only sixteen, Anatole and his much older brother Paul, assumed control of the family business empire located in the Ural Mountains of Russia, in 1828.

Anatole further controlled one of the most important mining and arms industrial empires in Russia, albeit from afar, since most of his time was spent in Paris or at his Villa di San Donato in Florence.

The empire consisted of some fifteen villages and nine munitions and mining factories all of which generated an immense fortune of five million roubles each year for Anatole.

His keen and studied artistic taste led him, while in his early 20’s, to commission masterpieces of art from the leading painters of the Romantic Movement. Auguste Raffet, a man whose critical opinion Anatole sought in most situations, advised Anatole on the purchase of thirteen Dutch and Flemish paintings at the Duchesse of Berry sale in 1837.

Demidoff’s unique taste set a pace, and the Rothschild family in England generally followed his lead.

His collections were lavishly showcased at Villa San Donato in Florence. Demidoff died in Paris, on the 29th April 1870.

A Meissen plate from the Prince Orlov service is also in the David Roche Collection. Its blue crossed swords and dot mark identify it as being made c 1770. The central martial trophy, includes a yellow-tasselled blue flag with the Imperial double-headed eagle.

The border is strewn with puce coloured bouquets and flower-sprays are centred above by a gilt monogram THO below a black eagle and enclosed by the blue ribbon of the Order of St. Andrew which is woven around gilt foliage and surmounted by a gilt crown.

The plate has a waved gilt dentil style rim with just some minute scratches to the centre and some slight wear to the rim observed the curator.

Another delightful family portrait is traditionally believed to be of the famous Russian architect Andrei Voronikin (d. 1814) depicted with his wife and children in the park at Pavlovsk Palace. The Palace of Pavlovsk, was the last of the palace complexes built in the environs of St. Petersburg.

Its fame resting on the splendour of its classical architecture, incredible interiors, great art collections, and on the beauty of the spacious park, which covered around 1500 acres . The temple seen on the far right of the painting, is traditionally believed to be the Temple of Friendship, however there is no representation of the River Slavianka and the Temple is not built on a steep hill as represented here.

Andrei Voronikin was commissioned by Maria Feodorovna to restore and furnish Pavlovsk Palace after a fire in 1803.

From the Palace of Pavlovsk there is also a Secrétaire, made of Mahogany and Brass. In the Neoclassical taste, this beautiful brass-mounted mahogany secrétaire, has a stepped rectangular top, which is surmounted by a cylindrical flute superstructure.

There is a fall-front drawer and this lovely piece of unusual furniture is gilt tooled, with an inset leather top and two small drawers, over a single hinged door.

This encloses a concave shelf, which raised on a circular section, with tapering fluted legs ending in toupee feet; the whole enriched with brass borders, roundels and ormolu urns.

A country residence of the Russian Imperial family, Pavlovsk was where prominent writers and poets gathered who recorded their impressions of its many splendours.

Its magnificence was the fruit of a collaboration among Russian, British, French, German and Italian designers, some with the Scottish Architect Charles Cameron. It is the story of its destruction and incredible resurrection, which lies at the heart of its fame today. This included the local population saving its treasures for posterity.

David Roche’s extraordinary legacy is slowly being revealed as the museum is in Transition, leading up to the opening of a new environmentally designed gallery in 2016. Attached to the house as part of the complex which includes a lecture theatre, the David Roche Foundation House Museum offers viewers an intimate experience of the fine and decorative arts. The current exhibition is open Tuesday to Thursday 10 am to 3 pm. Gold coin donation entry.

Provence: your distinctive country style is admired world wide created through the people, the produce of the land and practical considerations of everyday life