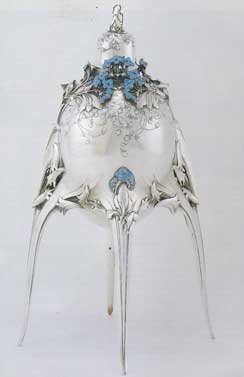 In an Age of Modernism most silver manufacturers at the turn of the twentieth century opted for the known over the unknown. Orthodoxy prevailed, even in an industry rapidly being overhauled by modern technological advances. Jules Auguste Habert Dys (1850-1924) was a notable exception. He was one of several metalworkers of distinction in Europe between 1900 and 1910. The design of his Caviar-server creature with its sinuous Art Nouveau vocabulary of ornament and blue enameled forget me not flowers seems as if it’s all set to take over the world.  The enamel is hinged so that the cap may be removed. Inside a metal tube for the caviar sits atop a pin allowing space for crushed ice to be inserted. Architect designer Adolf Loos who advocated the elimination of all decoration lashed out at designs such as this by equating ornament to both spiritual and moral weakness.

Invitation to a glamorous night of opera arias with the one and only Belladiva. Help make a difference for a lot of children disadvantaged by the Queensland Floods. Saturday 2nd April…Book NOW