Designed and created by sculptor Tanya Bartlett a bronze statue of an Australian WWI trooper saying a personal farewell to his faithful ‘New South’ Waler horse stands proudly at Tamworth in our country’s heartland. It is a fine tribute to all the those brave men and horses who served in the Boer, Sudan and First World Wars.

Fallen heroes: how will we ever express 100 years on from the Great War – World War I (1914-1918) how we really feel about the sacrifice for the greater good made by men and women of the Australian and New Zealand Army Corps (ANZAC) who helped to shape our society? They gave so many people an opportunity to grow up in surely the two luckiest countries in the world.

Watching the heart wrenching brilliantly conceived, created and produced story about the men and horses of the Australian Light Horse recently on ABC TV was indeed my own personal undoing. The brilliant feature length documentary about The Waler: Australia’s Great War Horse was a moving experience.

It was all about the unique partnership that existed between man and the Waler horse, which was mixture of a variety of breeds of horses that came to the colony of New South Wales in its earliest period. Gradually as it evolved it became renowned for its hardiness.

The brave ‘Waler’ helped their riders overseas defeat the mighty Ottoman Empire after 100 years in the Middle East. They carried their men to victory at Damascus, although they did not return home afterwards.

It was certainly a revelation to me, as I am sure it was for many others, that Lawrence of Arabia was not the first of the allies to ride into and liberate Damascus in 1918 from the enemy.

Their reputation for being tough warriors had preceded them.

The little known fact remained unknown until recent research by the writers of the Waler’s story found a letter that had sat hidden ‘ in a shoebox for 100 years’.

Produced by Mago Films and superbly told as written by Barry Strickland and Russell Vines its Director, this amazing tale of the Australian bushmen and their horses was brought vividly to life. Stories about Michael Shanahan and his extraordinary courageous companion the horse known as Bill the Bastard, as well as that of Guy Haydon and his mighty Midnight were featured.

Bill and Michael in one major offensive bravely rode into the line of heavy fire to rescue five Australian soldiers who were trapped. Standing over 17 hands high Bill’s strength was able to support them all and their kit and haul them to safety. It was an extraordinary feat of courage under fire for both men and horse.

It confirmed for me those tales my country born Nan used to tell me when I was growing up. She was sure her country boys and their plucky steeds were not only the ‘best cavalrymen in the world’, but also the bravest in history.

Born and bred in Scone in northern NSW where horses were integral to society, her tales delivered with passion about their exploits was captivating for her grandchildren.

Charged with drama, this documentary should win a bucket of awards. It is also one that surely must be shown to all Australian High School children.

As a tough horse the Australian Waler was able to survive the rigorous conditions of the outback – that early liberal dash of an Arab thoroughbred in their bloodline, giving them their remarkable endurance. 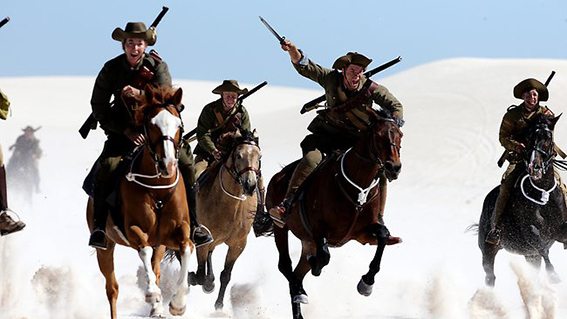 The men of the Australian Light Horse equipped themselves honourably in the gruelling campaign in the desert of Sinai and Palestine, ably aided by their faithful ‘Walers’ a horse unique to Australia the forbear of the hardy Australian stock horse.

Bill the Bastard gained his name for being as stubborn as a mule and bucking so many riders off that he seemed impossible to ride. However that was before he met Michael and then he knew he had met his match and embraced the partnership that developed between them. While the Great War Horse story is not a tale of Gallipoli, it is a prelude because after surviving so much hardship on horseback, the men that were still alive had to leave their horses behind in Egypt and head off to more horrors in Gallipoli’s trenches.

The director Russell Vines doesn’t pull any punches and he and his colleagues tell this extraordinary story straight up and as it happened. No frills, just honouring and celebrating the men, their horses and achievements.

Officially retired after the battle, he had performed in so well spending 6 hours in the thick of it all, Bill had the best possible ending, left with the adoring villagers on Gallipoli, the resting place of Australia’s fallen war heroes. 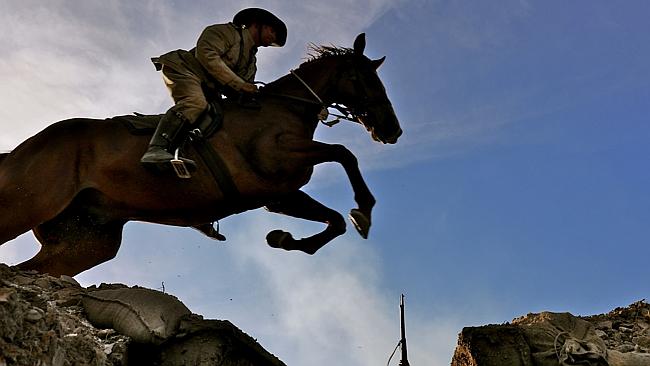 Midnight didn’t fare so well. He died shot while jumping an enemy trench at Beersheba in 1917, a bullet penetrating his belly and going all the way through body and into his rider Guy Haydon’s back through his bed roll. It was removed a few days later revealing that in essence Midnight had saved his life.

During Word War 1 the program showed the story of how over 130,000 Australian ‘Waler’ horses left our shores never to return again. Some 15 out of 100 horses died at sea on the way and 70,000 died in the line of duty.

Only one was to return home, Sandy who is commemorated at the Australian War Memorial in Canberra. Assigned to General Sir William Bridges commander of the Australian 1st division, the first ashore at Gallipoli he was returned to Melbourne at war’s end when his rider was shot by a sniper.

His dying wish was that his faithful horse should be repatriated. Sandy the great survivor was to live out the rest of his days at the Army ­Remount Depot in Maribynong in Victoria, until he was humanely put down in 1923. 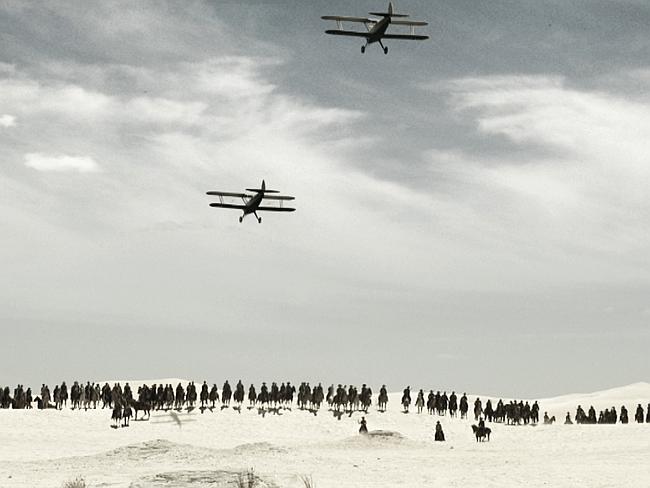 The show achingly reveals what happened to the other 50,000 Australian horses that were still alive when guns became silent in 1918.

When the war was over those who had not died in battle were either dispersed locally.

Many however were shot in the head by their owners after serving not only their masters so well, but also by default each and every one of us alive today.

Representatives of the government of the day were forced as their owners were to see the horses dispassionately.

They were ‘casualties’ of war as in reality as at the time Australia could not afford the funds required to ship such a vast contingent of the faithful horses home.

Riders accepted the decision with a heavy heart.

I don’t think I could stand the thought of my old fancy hack
Just crawling round old Cairo with a ‘Gyppo on his back.

Perhaps some English tourist out in Palestine may find
My broken-hearted Waler with a wooden plough behind.

No: I think I’d better shoot him and tell a little lie:–
“He floundered in a wombat hole and then lay down to die.”*

The war took an alarming toll on the Australian economy, which would take through the 50’s to begin to recover and then all of the 60’s and way into the 70’s before it began to really prosper once more. 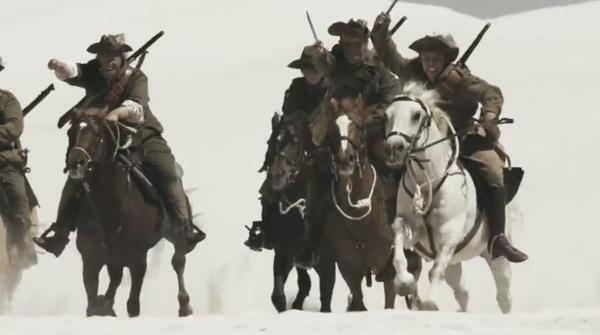 The fearless filming took place in the extensive sand dunes north of Perth in Western Australia where actors had to contend with the ‘heat, thirst and leg-breaking pitfalls’ to get the job done. And they certainly did, and so very well. Entirely admirable.

If you missed it, you can access it on the ABC’s iView.

The Walers: Australia’s Great War Horse is a superb documentary, a significant achievement for those with the vision to record this amazing story – and an emotive experience for all Australians to share.

ANZAC Day, 25th April each year, commemorates the sacrifice of life in wartime and is an assertion of the nobility of a cause many young men died to protect