Chairs historically from thrones to stools, from stuffed to overstuffed, from Rome to Renaissance, Baroque to Bauhaus are about much more than seating.

Twiggy, the face of 66 became the world’s first supermodel posing stylishly on a chair, or should we say a piece of ‘equipment for the home’?

Well, that’s at least what one of the foremost leaders of style during the 20th century believed – Swiss-French architect designer, painter, urban planner and writer Charles-Édouard Jeanneret-Gris, known as Le Corbusier.

He declared in 1923 ‘a house is a machine for living’. In his publication Towards an Architecture he embraced a theoretical concept from ancient Greece that all our architectural spaces should relate to the mathematics of the human form – uniting both form and function. An ancient stele with a sculptural relief discovered 1870 (National Archaeological Museum at Athens) reveals a mature Athenian woman of Virtue (Hegeso) seated on a klismos chair.

The construction includes a mortise and tenon joint well-known in ancient Egypt, in which a rectangular cavity (mortise) in one section receives a projecting tongue (tenon) of the other.

Its invention was a huge step forward for the future of furniture making and architecture in our world.

Five centuries before the Christ event society’s focus was on form, rhythm, precision, clarity, and proportion, all elements integral to design in all aspects of life, including furniture.

On a Klismos chair the rear legs sweep continuously upward and supported a wide concave backrest like a curved tablet supporting the sitter’s shoulders.

Characteristic of the art works of the Greek colonies in Southern Italy 350-300 BC, the curved, tapered legs of the klismos chair sweep forward and rearward, offering stability.

During the Roman Empire of 1st to 5th century ACE, the aristocracy had many different types of chairs, including a high curved back chair modelled on the ancient Greek klismos, which was given the addition of painted decoration. Seated woman playing a kithara: From Room H of the Villa of P. Fannius Synistor at Boscoreale, ca. 40–30 B.C.; Late Republican – She is seated on a ‘sollium’ lacquered a deep lustrous red – courtesy Metropolitan Museum of Art, New York

Then there was a solium used by the paterfamilias, or, head of the family.

In Rome having arms meant a chair reserved for the person with authority.

Our woman playing a kithara (lyre) is depicted on a Roman fresco, c. 40-30 BC courtesy Metropolitan Museum of Art, New York

A strict hierarchy in Roman society meant servants sat on a Sella Curulis, a stool that derived from an ancient Egyptian model.

It gained a back and a new name the Curule from the Latin curulis, perhaps alteration currulis of a chariot, derived from currus chariot, from currere to run.

Used by Roman magistrates to dispense justice as at the (Vatican) It became a ‘seat of power’. Those who sat on it represented the might of Caesar and Rome.

When the Roman Empire of the west succumbed to Germanic tribes in 476 people retreated to the hills for safety and Roman culture went into decline although conserved in the east at Constantinople.

Indeed, those that sacked Rome took no interest in its former culture at all and it is astonishing to me to think its myriad of technological advancements didn’t engage the minds of Europeans for nearly 1000 yrs.

During the medieval period 5th – 15th century the idea of a ‘Roman’ seat of authority transposed to the Christian Church, becoming the ‘seat of the Bishop’ in charge.

Church leaders were among the only people, apart from the nobility who could afford such trappings of grandeur at this time.

He was made more authoritative by the addition of a footstool, lavish draperies and a cushion, indeed a sign he was doing well.

At the height of the Church’s influence, Bishops elevated their authority by also sitting on a throne.

Very far removed from the life of that humble committed man from Nazareth Jesus who worked as a carpenter and gave hope to so many followers of his way of life.

The Chair of St Augustine at Canterbury Cathedral in England is the ceremonial ‘enthronement’ chair of the Archbishop. Today is still on show only used on rare occasions.

The seat of the bishop in any Cathedral is known as a Cathedra from Greek word for chair; it defines a church building as a Cathedral.

I will explain: if you take the ‘cathedra’ out of a Cathedral and put in the local church down the road, then it will become the ‘cathedral’, the seat of authority for the Bishop. 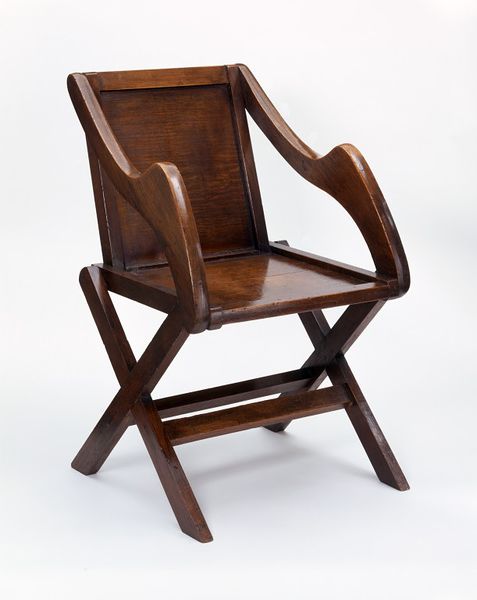 One unique chair in Britain made in 1504 from a description of one in Rome by Abbot Richard Beere is known as the Glastonbury Chair, named for the famous abbey where it is found. The only place I know of one in Australia is in the apse behind the high altar St John’s Cathedral at Brisbane.

Medieval furniture was not held together by glue and the Glastonbury chair can be found in a few variations, emerging out of the Roman tradition, sometimes carved with decoration and inscriptions and following the medieval construction tradition, with its mortice and tenon joints held firmly in place by wooden dowels.

This meant the timber, which shrinks and loses moisture across the grain as it ages, could be re-positioned and re-pegged if necessary, allowing the joints, or in the case of beams in elaborate timber ceilings, to move over great lengths of time. In an illuminated illustration June 5, 1286 Edward I son of King Henry III of England was depicted paying homage to the King of France Philip the Fair in the presence of the court, seated on a Roman Sella curulis

Pilgrims flocked to the city until 12th century when a decline in the understanding of the original city took place.

During the 13th and 14th centuries the Romans began admiring their ancestors.

They were dreaming of building a new republic on the pattern of the old.

At this time royalty and nobles sat on chairs, quite often with canopies, ladies in waiting sat on cushions on the floor, while everyone else sat on benches.

‘Man’s body is a model of proportion’ … ensuring nature became the embodiment of truth, and the mathematics of the human body a consideration in design again…although it would take a while.

Translated and distributed in many languages slowly over the next few centuries, it ensured that life would never be the same again as architects, artists and artisans looked to his words.  They were a revelation.

From Rome to Renaissance during the 15th and 16th century in Italy the new era in art, design and style saw the emergence of the artisan as a creator. Andrea Mantegna – The Court of Mantua

At the Court Ludovico Gonzaga of Mantua existing chair styles were refined with luxurious textiles. Andrea Mantegna and merchants, such as the Medici in Florence wanted to enjoy the good life too, seconding the furnishings previously only used by the nobility to themselves.

An all new middle level of society was now emerging.

By the 17th century in England and North Western Europe, society was adopting a new economic model, the one that forms the basis for today’s western tradition.

Patronage, vision and creativity were coming together as new worlds opened up with exploration. At Knole in Kent a number of perquisite chairs from this period survive with original upholstery intact paying homage to ancient Roman styles.

They are also trimmed with fringing and braiding from France (passimenterie). 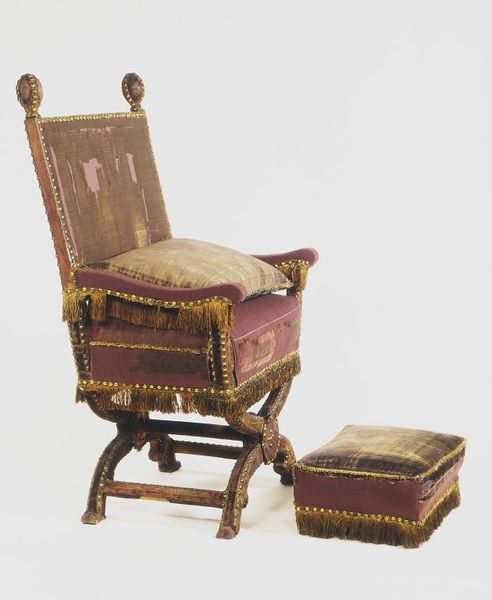 Made by John Casbert the royal upholsterer, William Juxon Archbishop of Canterbury used a Roman style of chair at the coronation of Charles II (1630 – 1685) who brought French influence to England when he was restored to the English throne in 1660.

Following France’s invasion of Holland in 1672 the Dutch fell in behind William 111 Prince of Orange, when he and his wife Mary, the sister of Charles II travelled to England in 1689 to take the throne.

This was when the balance of power began to shift from the top down in earnest.

They summoned their French designer Daniel Marot (1660-1712) to England where he remained until 1698, becoming the game changer with his influence on art, design and style.

Marot’s family were Huguenots (Protestants) part of the wave of émigrés who left France in the year Louis XIV Revoked Edict of Nantes (1685), which had ensured their security through religious toleration.

Now as he neared the end of his reign Louis decided he wanted to leave to God a fully ‘Christian’ France. 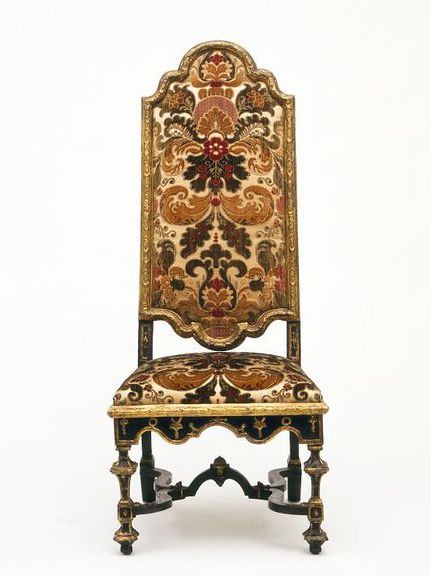 Beech, carved, painted and gilded (modern upholstery) ca 1700 (made) this chair is from a set of eight chairs, two stools and a settee. Suites of seat furniture such as this were sometimes used to furnish state bedchambers inspired by the design of tall backed chairs by Huguenot designer Daniel Marot

As most of his artists and artisans were Huguenots the creme de la creme of his workers producing luxury products for all the courts of Europe fled. This had a depressive impact on the economy in France when they left, and in England, the Netherlands and other countries they had fled to, prospered.

Marot brought the fully developed court style of Louis XIV from France to Holland, and London.

His chairs with distinctive tall-carved elaborately styled backs were readily available, exemplifying the cross-cultural and political affiliation between England and Holland.

They also represented the cross communication of nobility and country gentry happening at the time. Designs inspired by Marot’s drawings – engravings had caned or upholstered over seats.

The English style loosely called “William and Mary” owes much to Marot’s manner and influence on London designers. This extraordinary number is one of pair 1689 made for Daniel Finch, second earl of Nottingham probably made by Thomas Robert, a London chair maker. He provided much of the seat furniture for the royal household and this one is of ebonized beechwood, with its original Genoese velvet cover Louis XIV Dining, inviting the playwright Moliere to join him

During the first half of his reign legs were straight, and turned or carved in a squarish effect, like pedestals. Carved and Gilded Walnut Chair, Louis XIV c1675 – these chairs were similar to those introduced into England by Daniel Marot, and known as William & Mary chairs. Even the Italian sculptor Bernini approved of Charles Le Brun’s schemes for interiors he said, were beautiful, abundance without confusion.

Under Charles Le Brun’s auspices Versailles gained for France supremacy in the arts, which Louis and his first minister Jean-Baptiste Colbert believed should serve the glory of France.

When the Sun King died 1715 his incredible focus on architectural, interior and garden design ensured that we are still feeling its after effects today.