The immediate reaction to the French revolution in Europe meant that a ‘new’ man of taste confirmed his support for the Directors of France by adopting in his interior, a pared down classical style.

Pierre Duval Le Camus’s (1790-1854) portrait of a man soberly and impeccably dressed standing against a bold architectural fireplace in a room where the decoration is plain, almost to the point of austerity. His chair of the Klismos type – reveals his academic leanings and the simplicity of his style, reflecting his innate sensitivity. 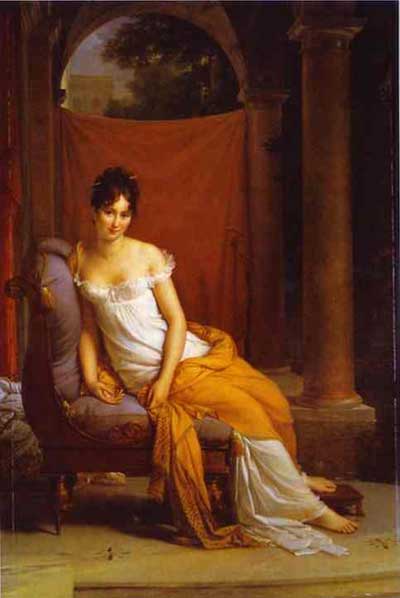 The French style we know as Empire would be a natural progression of a preference for neoclassical art that had begun before the great societal rupture, which was led by a youthful inexperienced Madame Juliette Recamier (1777 – 1849).

She was said to have ‘walked like a goddess on the clouds – her voice thrilling the senses’.

She fashioned her house with the help of the brilliiant architects Charles Percier and Pierre Leonard Fontaine.

They marked the political and social structure and arts of other nations dramatically with designs that when the Empire finally and quickly collapsed in 1815, inspired endless dreams of glory among following generations.

The Roman Curule was a chair back into fashion; albeit a new interpretation by Jacob Freres 1796 – 1803. The so-called Klismos chair from ancient Greece, also gained new connotations. The Empire style would reach its pinnacle of perfection during the reign of Percier and Fontaine’s greatest patrons Emperor Napoleon 1 (1805-1814) and Empress Josephine (1763-1814).

Furniture was characterized by motifs from the classical world of Egypt, Rome and Greece and took on monumental forms and the Empire style epitomised Napoleon and Josephine both.

It put society before the individual reflecting his military genius, passion for Rome and Roman ideals as well as her love of gaiety and beauty. Her symbol the swan, adorned some of the most beautiful seat furniture yet seen. A son of the revolution, Napoleon used magnificence and splendour to promote his image and Olympian power throughout Europe.

One could say it was a combination of the pomp and ceremony of the Bourbons together with the theatricality of the Italians. Sphinxes, winged lions and creatures with heads of eagles were employed as table legs and armrests on chairs. Napoleon’s victories on the battlefield shaped chair styles no less than the themes of Grand Opera, a combination irresistible and a potent inspiration to every type of artist of his day. In 1813 in England Adam Buck based in London, melded sombre and joyful together. He recorded his family in a setting inspired by painted decoration on ancient Greek vases being unearthed all over Europe at that time.

It is a selection we can see ranged along a shelf behind him.

The artist his wife, and two of their sons are in the presence of a herm (bust on a plain shaft) depicting a deceased family member. The Prince Regent, later George IV (1762-1830) whatever his failings as a man and Prince, was a notable patron of the arts. He collected widely and spent lavishly. His penchant for the French taste embarrassed parliament during the revolution and when England was at war with Napoleon … and he was bringing it through the lines. He was however not alone, Josephine at the time was also bringing the plants from London she admired to grow in her hothouse at Malmaison, adding a dash of unreality to the conflict.

At this time there was a preferred taste for jazzy woods with very strong graining. Rosewood, zebrawood and calamander were in favour and very expensive, which gave impetus to painted imitations especially bamboo with the rise of the China Trade opening up eastern markets, as goods became more readily available to a burgeoning middle class market.

Exotic woods could be imitated at a fraction of the cost using beech wood or for the cheapest, pine, painted, grained and gilded to give a rich effect. The art of lacquering originated in Asia, used since antiquity.  Lacquer is made by applying successive coats of the sap of the Rhus vernicifera, or lac-tree, onto wood. To emulate the lacquered effect, European craftsmen created an imitation commonly referred to as japanned work 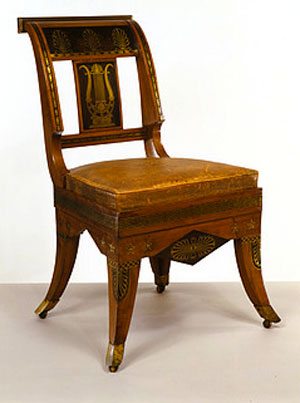 Thomas Hope’s designs for interiors and furniture became central to the full development of the Regency style. Connoisseur, architect, furniture designer and author, son of a banker and merchant of Amsterdam, Hope travelled widely studying architecture.

Settling in England in 1794 when the French were occupying Holland, Hope considered beauty not only through ornament but also in outline. Contemporaries saw his originality as brilliant and revolutionary. At his London house in Duchess Street people were admitted by subscription.

It was a showcase of his scholarly adaptation of antique classical elements and his pattern book, published in 1807, reached a wide audience. The design style called Biedermeier originated in Vienna following Napoleon’s subsequent exile to Saint Helena in 1815. The breaking down of the old hierarchical systems of Europe meant a universal ‘embourgeoisement’ of society.

Stylistically the style that emerged lacked pretention, lasting in its purist form 1815 – 1830. Simple, functional yet elegant, its origins were in the styles preferred during the Empire and Regency periods, although a pared down version. The new style reflected the mental attitude of a people living in a repressive political climate, who cultivated a sheltered domesticity. Moving furniture away from the walls during the first thirty years of the nineteenth century became a game changer– especially in England where daily life was also changing.

A youthful Queen Victoria and her consort Prince Albert led fashionable taste and her visit to France in 1843 was a triumph and value for money would become the main criteria for the development of style during her reign, rather than artistic achievement or aesthetic considerations.

There were two schools of thinking by the mid 19th century Romantic and Moral. A poem “the Angel in the House” written by Coventry Patmore about his wife had considerable impact on men’s thinking. After bearing six children, his wife Emily succumbed to tuberculosis in 1862.

He wrote a poem celebrating her virtues and from then on every Victorian Gentleman of substance wished his wife to perfectly emulate Emily, as he endowed with her beauty and innocence of manner.

In both England and Europe sex, childbirth and other women’s problems were virtually never discussed. This was part of the Gothic revival spirit of chivalry Alfred Lord Tennyson’s poem Lancelot and Guinevere and many others helped the romantic view, because everywhere everyone felt repressed. (John William Waterhouse 1849-1917)

The domestic cares of the household were kept hidden; order and quiet was valued above all and every corner of a room was devoted to the pursuit of a leisurely pastime. This notion completely rejected the empirical ideal that interiors should be arranged purely for the sake of appearance. 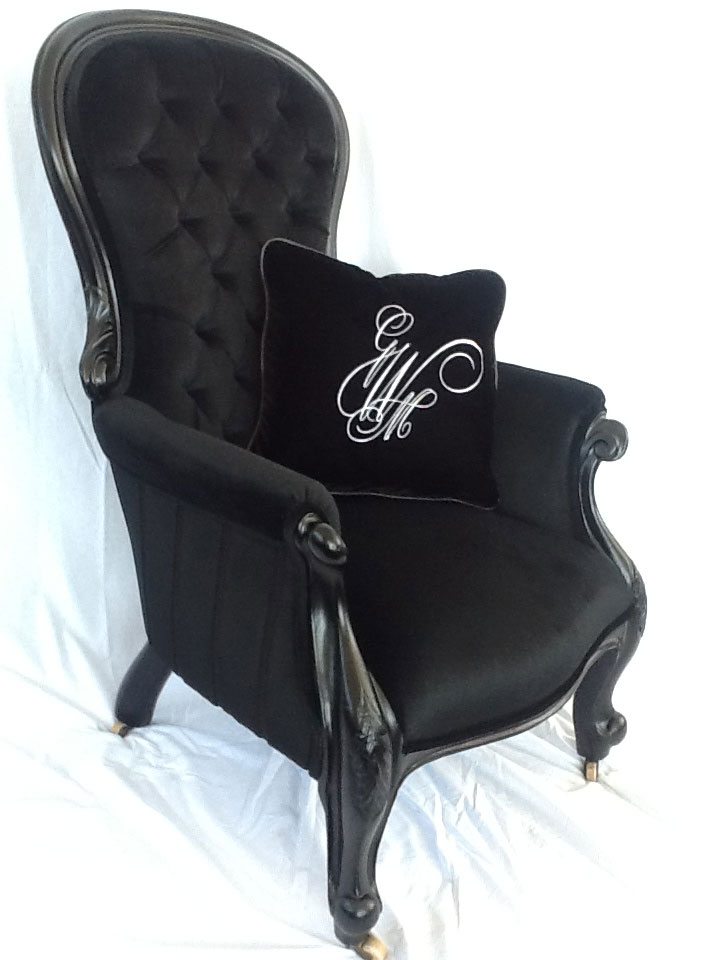 Instead they should reflect the personal taste and the functional needs of an industrious family. His and Her chairs reached their pinnacle of perfection. 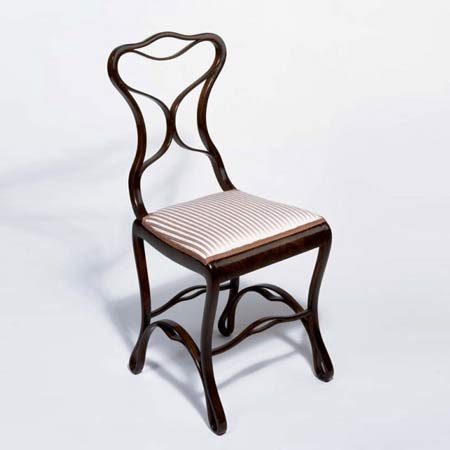 It is interesting to note at this point after 1830 Michael Thonet (1796-1871) was pioneering industrialization of furniture manufacture in Boppard, Germany, propelling the notion of bending woods, and subsequently tubular metal.

This affected design possibilities into the twentieth century.

The perfection of methods of laminating and shaping timber meant cheaper carcass timbers would be used, with expensive veneers cut finely, saving money and adding profit. 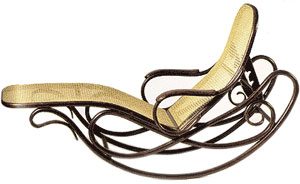 He moved to Vienna establishing a patent in 1842 for his process – his pliant pleasing styles practiced by artists were a veritable box office hit overnight… allowing form a synthesis with interior design and the liberal arts; bringing about a sense of liberated living.

By the 1850’s and 60’s a need to supplement basic furnishings was obvious.  Jennens and Bettridge of Birmingham in England was the principal firm in business from 1816 until 1864 making Papier-Mache furniture Japanned black and inlaid with mother of pearl and stencilled patterns of gilding – one of the oddities of the time also became a rage c1830. The middle classes in Europe, England and America were expanding rapidly, and a whole range of new styles of furniture and furnishings were being introduced.  Family life altered room arrangements and…so great did the clutter and mobility become eventually the Duke de Morny was heard to remark ‘that one had to move about with as much caution as a ship avoiding shoals of rock!