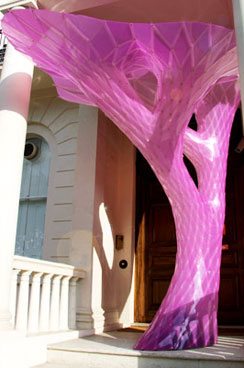 Londoners by now are used to seeing ‘crazy things’ constantly pop up on their horizon.

None perhaps so visually exciting as the gorgeous hot pink ‘chandeliers’, which popped up in the terrace house entrances of Belgrave Square, during July 2010.

The purpose of the structures were twofold: acting as a source of shade during the day, and turned into a dazzling illumination at night by dispersing light collected by photovoltaic cells hours before.

Designed by British-based Orproject, the OR2 was one of the highlights of the London Festival of Architecture.

In 2008 at the Milan furniture fair Christoph Klemmt designed a new style of green solar ‘chandelier’, which garnered the power of the sun to illuminate the LED’s (light-emitting diode) scattered along its surface. Gradually, it changed from clear to bright colours when struck by direct sunlight.

It is highly debatable you will have one in your house soon, but these unique products prove people are still thinking outside the square when it comes to producing a new way to illuminate our world.

Both examples were highly decorative and yet still interestingly fall into the category of a chandelier, although they are not crystal clear any more. 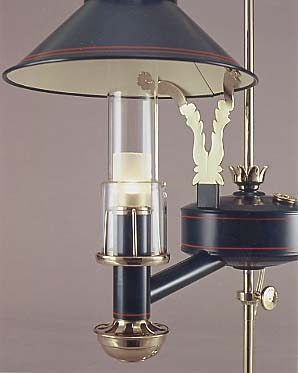 For seventeen centuries in Europe lighting was extremely difficult and today with all our advantages of technology, it is hard for us to imagine how dark it was indoors in most houses, which were in the main only well-lit on special occasions.

Under normal light a room was seen in shadows, good wax candles were expensive, with tallow candles and rush lights smelly, quickly consumed or both. Until the invention of the ‘Argand lamp, which burned Colza oil, and later ‘electric’ light, all classes and members of society were placed at a distinct disadvantage in ordering their daily lives.

Chandelles was the name given to tallow candles by the French, the word ‘Chandelier’ introduced into the written English language by the fourteenth century, an influence no doubt that may have been a consequence of the Norman conquest of England.

During the medieval period night-time illumination was achieved by placing candles on spikes on what could be described as a wooden tree that hung down from the ceiling.

These chandeliers became more elaborate as time passed and made from cast iron as well but the costs associated with keeping them and the huge fire risk, meant they kept trying to come up with alternate methods for lighting. 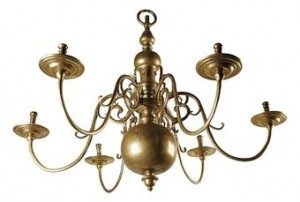 Brass had been known during the Roman period. However it was only in post medieval Europe they re-discovered how to make brass by alloying metallic zinc with copper.

By the seventeenth century brass chandeliers were popular, especially among the wealthy merchant class in the Low Countries where they became a status symbol because of the cost of candles needed to keep them lit. 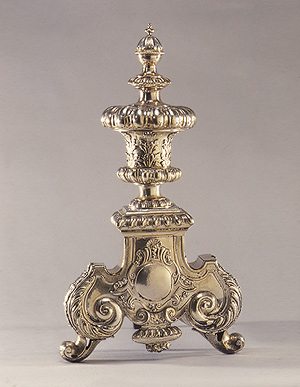 When ornamented, fire dogs made of iron were fronted with brass or, occasionally, enamel on brass. These pieces in The Met, New York are by Benjamin Pyne, a rare survival in silver.

The French early on realized the added importance of reflection and that the strongest light often came from the fireplace. And so they also silvered and gilded fire-dogs or polished marble to reflect it. 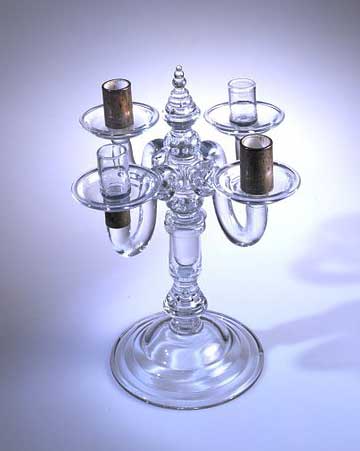 However it was the English who made a remarkable contribution to glass’s already fascinating history in Europe with the invention of a strong and durable glass that contained lead.

This was perfected by 1681. Today this glass, which contains 33% lead is known as ‘crystal’ due to its durability and ability to be cut and faceted, as well as through its relationship to reflecting light brilliantly.

Creating ways of reflecting and refracting light became an increasingly important consideration for artist and designer Charles le Brun (1619-1690) when he was working at the Chateau Vaux le Vicomte for the original ‘Sun King’, Nicolas Fouquet. He came up with superb ideas for refracting light using both mirrors and gilding. They still sit well within their original context.

They reflected the light beautifully and then he placed huge gilded candlestands surmounted by crystal candlelabra in front of the mirrors to reflect the light they were also refracting and against the windows to catch it.

It was a stunning effect. From the ceilings also hung enormous cut crystal chandeliers to light up the balls and many events that have taken place in this hall of all halls.

It was King Louis XV (1710-1774) in the eighteenth century who gave Bishop de Montmorency-Laval of Metz permission to found a glassworks in the village of Baccarat located in Lorraine in eastern France.

They would specialize in cutting and faceting glass.

They designed a glass holder for tallow candles and this new style of chandelier made from cut glass was instantly in demand.

A single version with an arm attached meant that you could carry it with you as you found your way to the bedchamber.

Standing chandeliers of rock crystal or glass components called lustres were very lovely, arranged on side tables, side cabinets and mantelpieces. 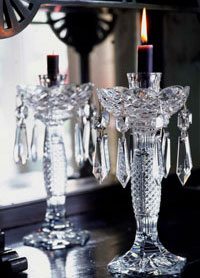 A standing candlestick with several branches, which became known as a candelabre, which meant literally a tree of candles, was seen on all the best dining tables in the town and country.

The all new hanging version, which is now synonymous with the word chandelier, had several arms each with a nozzle at one end to hold the candle.

Made of glass they were less of a fire risk, unless someone chose to swing on them, or cut them down in a sword fight.

The arrangement of their arms became a new subject for creative expression and contributed to the growth of the glass industry.

In England Parliament’s approval of the Excise Act of 1777 doubled the tax rate on glass. However from 1780 onward the clever Irish exempted glass produced in Ireland from tax. 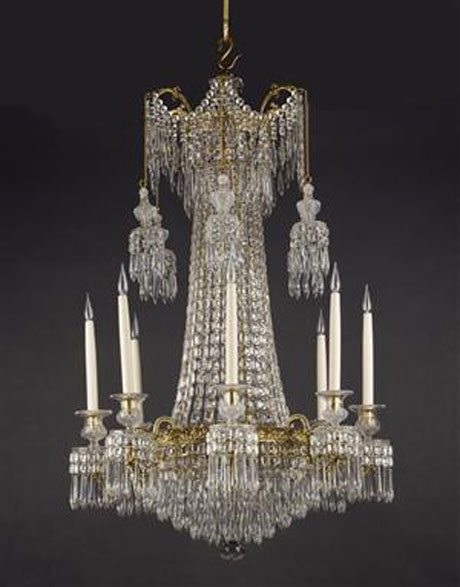 As a result, the Irish cut-glass industry was born, the Brits virtually taxing their own growth industry out of existence.

The extent of the English migration to Ireland is best illustrated by a report of 1785 given as evidence before a Parliamentary Committee into commercial relations between Great Britain and Ireland.

A case cited ‘a Mr. Hill, a great manufacturer of Stourbridge…who had ‘lately gone to Waterford and taken with him the best workmen he could get (50 -70) in the county of Worcester’.

One of the early producers of glass chandeliers was the now internationally famous Waterford manufactory, whose product became highly favoured and was seen in all the best houses. At Waterford advances in technology mean that today they use industrial diamond tipped wheels to cut the crystal; a diamond wheel is used, which gives a high quality finish.

During the nineteenth century the company known as Baccarat also provided illustrious clients such as Tsar Nicholas II and Henry Ford with bespoke crystal ware, which was comparable to Saville Row bespoke tailoring for men. Swarovski crystal came about when Daniel Swarovski invented a method for cutting lead glass by machine in 1895.

Today it has many followers because of the rainbow spectrum of colours his ‘crystal’ refracts, produced by the addition of other substances.

After the invention of electric light many ‘antique’ glass numbers that originally held candles were converted. Then for a hundred years people were content with their lighting lot. Now, today well into the second decade of the twenty first century the Chandelier, from boardrooms to bars, from castles to villas from colourful pink to being green with its all new energy efficient bulbs in place, has reclaimed a place as a superb decorative item that still draws all to its glimmering light.