French designer, painter and all around visionary Charles le Brun (1619-1690) is one of my most admired artisans in all of design history. (Secretly I coveted his red slippers for years until I found a pair copying them, which I could never part with). Le Brun had the ability to transmit his ideas to embellish the incredible interiors he created for his clients, by producing impressive cartoons. Must say I would enjoyed to see Drawing Versailles: Studies and Cartoons of Charles Le Brun, an exhibition curated by Bénédicte Gady, on show recently at the CaixaForum, Barcelona.

Artists from the sixteenth to the nineteenth centuries commonly used cartoons, but few survived. Those produced by Charles Le Brun are the exception. He supplied drawings for both painted and sculpted decoration, unprecedented in the history of French art until this period.

They survived simply because when he died the King, who had provided his loyal designer with a stipend during his lifetime, acquired all his revered designer’s drawings, saving them from destruction as merely tools of their master’s trade, normally the practice. They all helped ensure the reputation of excellence in French painting that reigned supreme throughout the eighteenth century in Europe.

Three hundred and fifty cartoons have been restored by the Graphic Arts Department of le Louvre Museum at Paris, enabling them to be seen once again in all their original splendour.

Chosen from a store of some three thousand drawings found at the artist’s studio, requisitioned and added to the royal collections after his death in 1690, they are sure to reveal le Brun’s extraordinary skill as a draftsman as well as his amazing aptitude for getting the details right.

Studies of characters, allegorical figures, trophies and animals were all elements Charles le Brun conceived as integral to his great symbolic jigsaw puzzles, creating a whole that was not only awesome in scale but also breathtaking in its beauty.

Charles Le Brun (1619-90) throughout his professional career provided interior design and decoration for the exteriors of his colleague Parisian architect Louis le Vau (1612-1670). Vaux le Vicomte, the original palace of the Sun King, fashioned by Louis Le Vau, Charles Le Brun and Andre Le Notre – The Dream Team, who went on to embellish the chateau of Versailles

During their lifetime of working together, Le Brun and Le Vau would guide a talented team of craftsmen, painters, sculptors, stucco workers and gilders as they produced spectacular design effects, which still dazzle us today.

It was in 1632 that the pair first came to the attention of all the nobility when they built one of Paris’ most beautiful town houses, The Hotel Lambert for financier Jean Baptiste Lambert. Le Vau made brilliant use of its possibilities with his design for its architecture.

At the Hotel Lambert Louis Le Vau and Charles Le Brun demonstrated how satisfactory a fully unified concept could be. The entrance from the street leading to a court of which the curved end facing the visitor contains a staircase conceived on almost theatrical principles. In the The Gallery of Hercules which as of 2007 was still intact, Le Brun divided its 23 meters long and seven meters wide ceiling into five compositions, depicting stories of the heroes of antiquity.

The works executed by Le Vau and Le Brun at the Lambert became ‘a legend at once’. 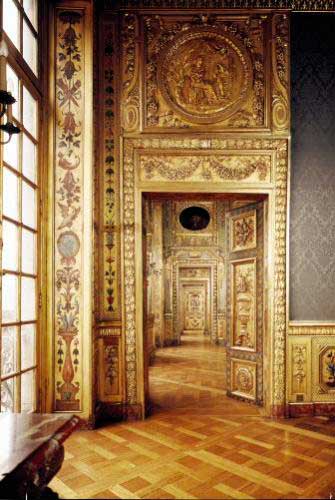 Interior decoration of the ‘gilded’ Enfilade at the Hotel Lauzun, architect Louis Le Vau and designer Charles Le Brun, who is also responsible for the painting

At the Hotel Lauzun, which the dynamic duo completed in 1656-7 the decor literally dripped with gold embellishing the carved door cases and other fixed features.

It was not just about a display of wealth…having proved it successfully reflected candlelight, like mirror plate, it made life after dark more bearable.

In northern climes it was for most of the year dark longer than it was light, so this was a big issue and, if you could afford it you used it lavishly.

It would be their extraordinary work at their project designing and building the Chateau Vaux Le Vicomte for owner Nicolas Fouquet that fully expressed the social status of its occupant and really caught noble attention.

Fouquet created a built environment in which all the arts contributed harmoniously to its overall beauty. Here at last was the perfect chateau; imposing but not huge; set among gardens where water basins, fountains, cascades and acres of flowers delighted the eye.

Together with the addition of André Le Notre (1613-1700) considered the most successful designer of formal gardens and parks, the intention of this trio or what I call my ‘dream team’, was to depict the ‘palace of the sun’ for their patron as described by the ancient Latin poet, Ovid.

They succeeded so well it changed the course of their lives, and many others, forever. The Chateau Vaux le Vicomte became part of an architectural French tradition in which its central block, which had a semi-engaged rotunda on the garden side, became one of the most important in French art due to Le Brun’s decorative program. 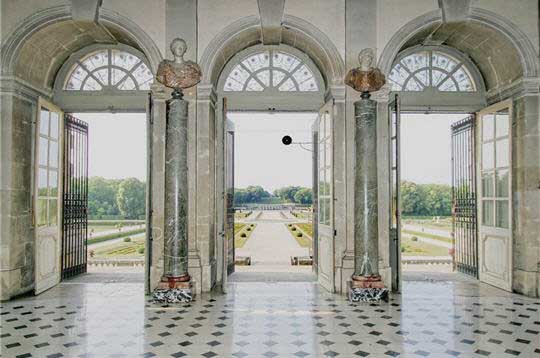 View of gardens from Grand Salon at Vaux le Vicomte

Although it was never completed, the room is entirely Le Brun’s work, where a whole repertory of symbols transformed what was a large hallway into one of the most brilliant rooms in French Baroque architectural history. Charles Le Brun (1619-1690), Preparatory drawing for the sculptors of the Grande Commande, Part of the series The Four Parts of the Day, 1674 commissioned by Louis XIV, courtesy Musée national du château, Versailles

Le Brun surrounded the level of the salon, that corresponded with the first floor of the chateau, with sixteen sheathed figures bearing an emblem in the form of a medallion on which the figures of the zodiac and the seasons can be identified.

However, many of the trophies located above the windows are still unidentified. The salon acted as an amphitheatre between the house and garden because when it was conceived it was completely open to the natural elements, where the great spectacle of nature unfolded.

Le Brun successfully introduced rooms l’Italienne to France where the coving and ceilings became fields to create masterpieces of French painting in the Italian style, because it was from ancient Rome the model for elevating ceilings came. In the dining room Charles Le Brun revealed himself as a painter of consummate skill.

On the coffered ceiling the central image Peace is bringing Abundance, which alludes to the 1659 Treaty of the Pyrenees with Spain.

The work at Vaux bought Le Brun and his colleagues to the attention of the King Louis XIV (1638-1715) and this extraordinary ‘Dream Team went on to work for him at Versailles. He had come to the attention of the Chancellor to Louis XIII as a child sketching enthusiastically alongside his father who was working on a garden project.

By the time he was 19 he was a painter to King Louis XIII when Nicolas Poussin, 20 years his senior was First Painter. Poussin journeyed to Rome taking his young prodigy along with him and for three years Le Brun studied his style and technique and absorbed his artistic theories. In 1661 Le Brun became First Painter to Louis XIV although he did not officially receive the title until 1664. In 1662 the king made him a titled nobleman and named him General Custodian of Paintings and Drawings in charge of enriching the royal collections. It was in 1671 that Louis and Colbert established the Royal Manufactory (the Manufacture Royale Des Meubles de La Courrone) with Charles Le Brun as its Director. Le Brun inspired and controlled a team of artists and his untiring energy and patience in the face of a changeable and sometimes difficult patron was admired.

His range of knowledge was vast; he could design a painting, a piece of garden sculpture and a tapestry all with equal ease and in a style that suited their function. Under his guidance the Manufactory employed 250 workmen to produce furniture and furnishings to his designs. A visit to Gobelins by the King in 1667 is recorded in one of the great tapestries prepared by Le Brun and Pierre de Sève the Younger in 1673 as part of a series of fourteen tapestries on the life the King which were regularly reproduced until 1741.

Two particularly impressive compositions Le Brun helped orchestrate at Versailles were the Staircase of the Ambassadors and splendid Hall of Mirrors. He adorned these locations with a series of mature paintings imbued with character.

The Staircase of the Ambassadors designed by Le Vau and decorated by Le Brun (1674-1678) led to the King and Queen’s apartments and accordingly, represented the power of the monarchy in France. Destroyed in 1752 by Louis XV during a remodelling period, it featured figures on a grand scale, enriched with all the gravity and dramatic quality of drawing in black pencil.

Le Brun made exceptional use of a narrow space increasing the sensation using optical effects and mixing fact and fiction.

He created an allegorical composition that depicted the return of Louis XIV after one of his military victories.

Le Brun surrounded the king by representatives from nations in the four continents, the kings of antiquity, victories, cupids and the arts: the cartoons reveal Le Brun worked on the décor of the staircase to the last minute, retouching and improving his drawings. Today a scale model of how the staircase used to look is displayed in the former vestibule of the Staircase.

The drawings I would like to encounter are those for the celebrated Hall of Mirrors at Versailles.

They are famed for revealing the artist’s working process, from the first small sketches to the final drawings, which are the same size as the paintings themselves.

Producing engravings of the overall work were meant to aid the monarch’s fame abroad and make French products fashionable.

In European painting, the figure of the king was traditionally represented by a mythological figure, most often Apollo.

Le Brun, however, portrayed the King, as he appeared himself, leading his armies to victory, wearing an ancient breastplate and a modern wig.

This was meant to present the King in an active dialogue with the gods, highlighting his divine power and rule.

Two scenes on the ceiling are represented: the King’s decision to rule alone, and his war with Holland; the richest most envied country in all of Europe during the reign of King Louis and his first minister Jean Baptiste Colbert.

They were both obsessed by its prosperity most of which came through commerce, banking, insurance, printing and seafaring.

One of the most famous encounters during this war, The Crossing of the Rhine in 1672, is shown through cartoons exactly as they were found in Le Brun’s studio.

It was 1682, when Louis XIV (1638 – 1715) finally transferred the whole of the French court to the chateau of Versailles where Charles Le Brun and hundreds of artisans and artists, the best from each discipline would ensure that ‘civilised’ life indoors would be far more than tolerable.