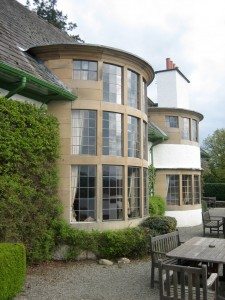 In England during the last twenty years of the nineteenth century architect Charles Francis Annesley Voysey (1857-1941) had a distinct dislike and distaste for overindulgence and display. He wrote of ‘discarding the mass of useless ornaments’. He evolved a style, which though susceptible to local variation, was universally acceptable rejecting the notion architecture is an ‘occult being’. He stressed it had its roots in good quality work, which should have some connection with everyday life. 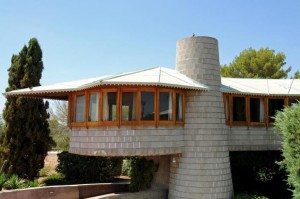 In America during the same era architect Frank Lloyd Wright (1869-1954) was developing architecture for conditions unlike anything in Europe, one whose philosophy was based on a house ‘developing from within’. His Prairie houses, mostly built in the first decade of the twentieth century, were large comfortable villas. They had boldly exposed internal brickwork, a prominence of fireplaces and chimney breasts, which ran often the full height of the room. He used textural contrasts to great effect, all of which were considered revolutionary at the time.

China: Grain to Pixel a photographic show at the Monash Gallery of Art is complex and fascinating, its size and sweep requiring attention, it repays the effort