By the late nineteenth and early twentieth century the economic and social forces which underpinned mid Victorian stability had been shattered. Britain’s manufacturing power was being threatened by rivals America, Germany and Japan, and at home by industrial unrest.

The rapidly growing middle class consumer enjoyed a whole new experience, as the ever expanding development of technology allowed for the manufacture of vastly increased amounts of furniture and provided the means for producing it cheaply.

Sadly this also meant an inevitable loss of artistic spontaneity.  The erosion of craft techniques was now easily overlooked by a market dominated by a need to aspire to impress by copying their ‘betters’. They were seeking reassurance in the styles of furniture and furnishings that were well tried and familiar and it was these that became the most popular. Charles Francis Anneslsey Voysey (1857-1941) was one of the few major ‘arts and crafts’ architects who was born in the 1850’s in the middle of the Industrial Revolution, who did not belong to the apostolic succession of architect George Edmund Street RA (1824 – 1881) and his pupils; William Morris, Phillip Webb and John Shaw.

His father, a Reverend of the Anglican Church was dismissed in one of the great ecclesiastical scandals of the century. His heresy; he did not believe in a doctrine of eternal damnation, or, as his son put it; he believed in a good God, rather than an angry one.

The influence of the god Rev Charles was strong. Young Charles was educated at home, with kindness permeating his evolving life. If he had to punish any of his children, Voysey wrote, his father would creep up to the bedside before the culprit was asleep and gently stroking his head with tears in his eyes, would soften the little hear with a few kind words and leave it in peace. Love of a mythical old England was the source of Arts and Crafts architects’ affection and the contrast between the movement’s passion for irregular buildings and its mania for surrounding them with clipped and pleached pattern, continued into the early twentieth century.

Voysey was a member of the Art Worker’s guild, privately educated and strongly religious. It was a simple linear style mostly devoid of surface ornamentation that while susceptible to local variation, was universally acceptable.

He stressed that good architecture had its roots in quality work, which should have some connection with everyday life, where well-made objects are treasured. He also believed that all houses should fufill the following criteria; a place for quietness in a storm, one that had economy of upkeep, provided evidence of security, was in harmony with natural surroundings, and had an absence of dark passages. These ideas placed him at the heart of the Arts and Crafts Movement. The Orchard at Chorley Wood, Hertfordshire, c1900 by Charles Voysey, the head the hand and the heart.

Our romantic images of this period are formed through hazy photographs by the seaside, adventures in new motor cars or flying machines old postcard albums and photographs depicting the best of an era.

The agricultural depression of the late nineteenth century removed land as the chief source of wealth in England.

By 1901 when Voysey was already in his 40’s, money to pay for a country house had to be made in urban centres of trade or in the Empire. Building a house in the country made to appear as old and as venerable as the countryside itself was the ideal. House became a complex and sometimes eclectic enterprise usually built of materials found locally with its geometric structure extending out into a garden designed to surround and complement it.

Charles Voysey’s houses have big roofs, wide doorways, low walls and are the very models of what children first draw when they make pictures of home. Like a child he delighted in simple jokes such as designing an iron bracket in the profile of the client’s face. 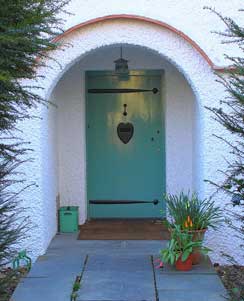 The entrance door to his home The Orchard, Chorley Wood, had a heart surrounded letterbox. His motto about the ‘Head Hand and Heart’ became the motto for the Society of Designers in 1896.

These three words are also the keys to understanding Charles Voysey’s focus.

The head for creativity and imagination, the hand’ for skill and craftsmanship and the heart for honesty and for love.