From London comes the news that arguably, England’s most famous country palace, Chatsworth House in Derbyshire, is having an ‘Attic Sale’ organized by Sotheby’s, London in October. This autumnal style clean out by the current Duke and Duchess of Devonshire, is more usually associated with Spring. Whatever, it will indeed be an amazing event.

What they have in their attic will certainly be worth a look at least, if not a personal perusal and perchance, perhaps a bid or two. The items will certainly reflect the evolution of art, design and style down the centuries.

A great many have come from a wonderful house they used to own at Picadilly in London, including amazing architectural antiques put into storage when it was demolished.

There are pieces by eighteenth century designer William Kent, and an amazing hand crafted William and Mary cabinet on stand of mind boggling quality. And there is also a bevvy of cups and saucers to be had. Something for everyone.

Chatsworth House today is one of the most delightful of places. Yes, its grand ‘baroque’ in style, has gloriously gilded window frames that glint in the setting sun and copious rooms full of precious and amazing art, furniture and objects. But it is not overwhelming, mainly because of the people who own it, and those who work in it. 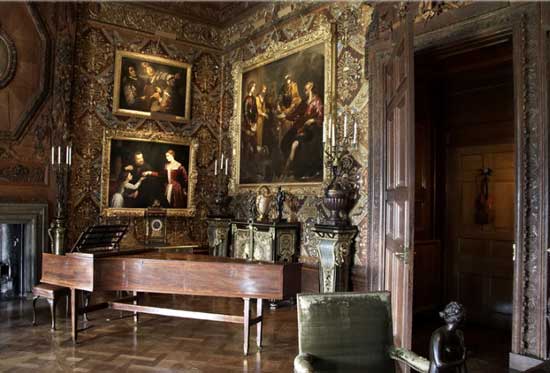 It has grass laid by eighteenth century garden landscape guru Capability Brown and I for one couldn’t resist taking of my shoes and wiggling my toes through it when I was there in 2002.

Since then the State Apartments have undergone a huge major overhaul, the first in 300 years and the gilded and coloured carved leather wall hangings glint once again as the sun sets through the windows.

It’s easy to hear the trompe l’eoil violin, which is painted on a door and meant to ‘trick the eye’, playing alongside the historic harpsichord nearby. And, its possible to imagine yourself in another world entirely when gazing upon a painting of Venice by Canaletto or casting your eye over a bevvy of beautiful sculptures in a gallery set aside for them to show off their classic beauty.

The original Chatsworth House had been built after 1552 by Bess of Hardwick and her second husband the 1st Earl Sir William Cavendish. In 1688 the 4th Earl and 1st Duke of Devonshire another William Cavendish (1640 – 1707) employed the quarrelsome character, architect William Talman (1650-1719). We know nothing of Talman’s preparation as an architect, except that he was employed in the gradual rebuilding of the south front, which is today a majestic statement of an original kind. 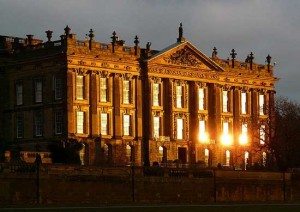 When it was  completed it surprised and delighted with its Italianate balustrades to the roofline and restrained use of giant classical order. Using balustrades at the roof level was a distinct change from a hipped roof and they emphasized the horizontal emphasis of its mass. The facade has been likened to Bernini’s designs for the Louvre and skilfully conceals the old Elizabethan building behind it.

In the 20th century, it has become an iconic country house to visit under the reign of the now Dowager Duchess Deborah, who is celebrating her 90th birthday in 2010. Over a thirty year period Duchess Deborah provided a welcoming experience that touched everyone who visited individually, no mean feat. She was a marketing marvel and responsible for producing the ready necessary to pay the wages of some 500 people who spent all the morning getting the house ready for it to open all afternoon.

They all adored her and it was easy to know why if you were lucky enough to come upon her dispensing her individual touch while mingling with the tourists to ensure everyone felt quite ‘at home’. I have had the joy of visiting Chatsworth House on four different occasions, twice with design and decorative arts students in tow. We always found that, despite it being a palace by definition, it was the most accessible house full of wonders that reflected our cultural development. We all used to wonder and fantasize about what might be in the attic or the cellars. So now I guess we can all find out. 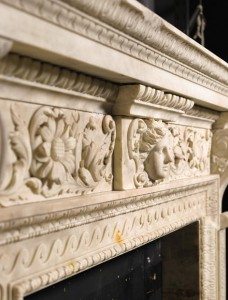 Join Sotheby’s Deputy Chairman Harry Dalmeny and Specialist David MacDonald as they discuss the important and exciting history and provenance of the many and varied artefacts in the upcoming Chatsworth Attic Sale.

The exhibition opens to the public at Chatsworth in Derbyshire on the 1st of October. Admission with catalogue only.