In New York a collaboration between The Costume Institute and Department of Asian Art at The Metropolitan Museum of Art has produced an interesting reflection on Chinese imagery and its ability to inspire the imagination of people in the west. Chinese art and trade wares have, since Roman times, fascinated people in the west. Arabian writers speak of fleets of large Chinese junks in the Persian Gulf as early as the 9th century. Currently showing in New York the exhibition China: Through the Looking Glass, May 7 – September 7, reveals how history is reflected not only in the fashion we wear but also the art we admire and the film that entertains us; our image film still from a movie of 2000 in the ‘Mood for Love’ During the fourteenth century in Europe the best selling story was Travels, by Sir John Mandeville. Translated into ten languages he described the palace of the Great Khan in Cathay in a manner calculated to make medieval readers eyes come out on stalks. It was a far more fanciful account than Marco Polo’s who devoted pages to describe, it has been since established more or less accurately, the layout and decoration of Kublai Khan’s palaces and gardens. They both made the point however, China was a land like no other, ensuring that she remained forever alluring. Silk festival robes woven for the Emperor and his Court displayed auspicious symbols, including cloud scrolls meant to bring good fortune and happiness. The China Trade would seem to have grown from the reports sent back to Venice by Marco Polo when Europe was still emerging from medievalism and the effects of such an account must have been phenomenal. The glorious wares they traded including blue and white porcelains for centuries not only fascinated the west but also affected her style. Magically translucent something that most pottery is not, the race to make Chinese style porcelain as it was known, consumed the west for a very long time. Chinese blue and white wares displayed throughout Europe and England in palaces and wealthy merchant homes for centuries were symbols of great worth and luxury; reflected in Roberto Cavalli’s evening dress made in the fall-winter of 2005 – 2006. The exhibition features stunning costume, exploring China’s impact on western aesthetics, which today are an important aspect of our global culture. American designer Ralph Lauren featured dragons on the back of his stunning black evening dress, produced for fall-winter 2011-2012. Dragons feature in both west and eastern story traditions, a fanciful but powerful symbol of power, ambition and good fortune. 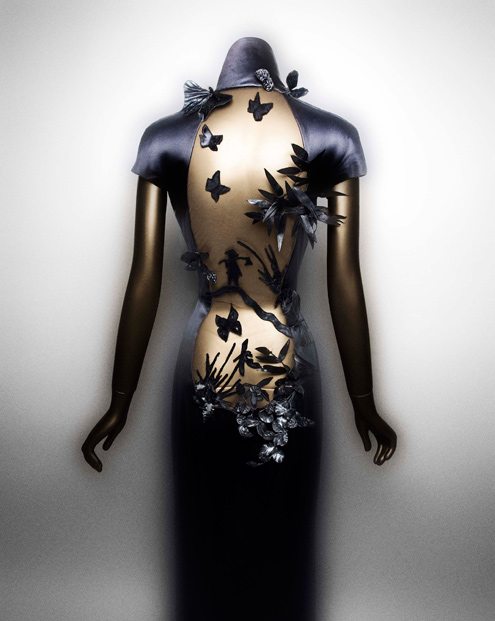 French designer Jean Paul Gaultier on the other hand, chose to channel the butterfly, which emerged from its chrysallis to decorate the back of his stunning black evening gown from 2001-2 haute couture collection. The butterfly motif was made eternal during the Chinese Tang dynasty (618-906), when it appeared in poetry and philosophical works. It was all about joy, felicity and longevity. With great visual appeal, China: Through the Looking Glass now showing, the show extended to September 7 is a great hit! Don’t Queue, Purchase Tickets in Advance

Norman Foster’s remarkable buildings completed during his lifetime have presence and are innovative, spacious and functional, challenging those working within