The fanciful design style Chinoiserie was the ultimate outcome and expression of a peculiar preference for pagodas, porcelains and priceless possessions passionately pursued for over four centuries in England and Europe. During the 17th century at France, King Louis XIV ordered architect Louis le Vau and gardener Andre le Notre to produce a tiny pleasure pavilion in the grounds of Versailles near the artificial lake. Built in 1671 to practice the arts of seduction, the so-called Trianon de Porcelaine was lavishly embellished with ceramics in the Chinese taste.

It was pulled down in 1687 when Louis’s mistress Mme de Montespan fell from favour. In its place the Grand Trianon was built for the King to entertain family and friends. 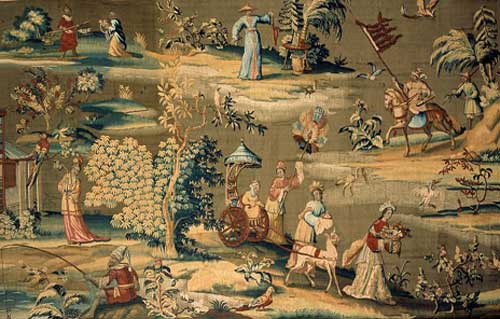 By the eighteenth century in Europe and England all things Chinese had assumed incredible proportions. Fashionable society sought to transmit their ideas about the magical land of Cathay through a multiplicity of imagery.

It manifested itself in intimate interiors, where mirrored rooms reflected scenes of frivolity well. It draped itself delightfully with sumptuous silk textiles that recorded scenes of fashion and folly.

The admiration of all things Chinese also led to the ultimate cross over of cultural influences. Fans, including one showing Louis XV and his family dining intimately, were among the earliest imports of the English and Dutch East India Companies and perfectly reflected the femininity associated with this movement, which combined flirtation with fantasy and frivolity.

On the scale of things a very few people in England or Europe had ever seen someone who was Chinese, so their vivid imagination took over.

When combined with a great layering of charm, Chinoiserie was a design style that was very fetching. It was the European evocation of the Chinese. 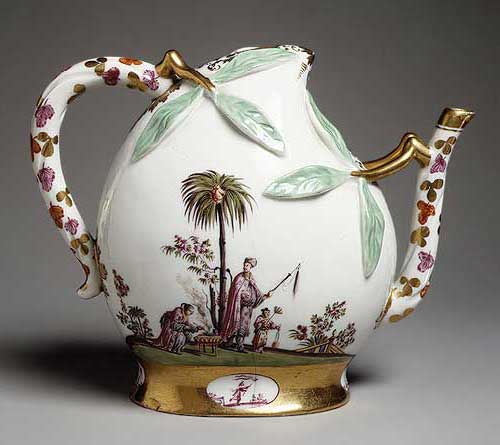 Our divine teapot is from from the Saxon porcelain factory Meissen, who invented European porcelain. Chinoiserie designs were all at once fun, fantastical and frivolous, yet quite sophisticated and enchantingly pretty.

Chinoiserie had a complete lack of pomposity and used clear bright colours, which had both amusing and fantastic qualities and displayed a preference for asymmetrical design.

This aspect offered everyone a rest from the formality and relentless perfection demanded by the classical legacy of ancient Greece and Rome.

It was all about having fun.

In a little Salon in the Chateau de Craon the scenes painted delicately on the interior walls and ceiling in a delightful circular chamber were typical of the work of the French designer Jean Baptiste Pillement (1728-1808).

Many of his designs were used on the newly popular small-scale feminine furniture and placed the emphasis on Chinoiserie as a style of luxury and refinement. 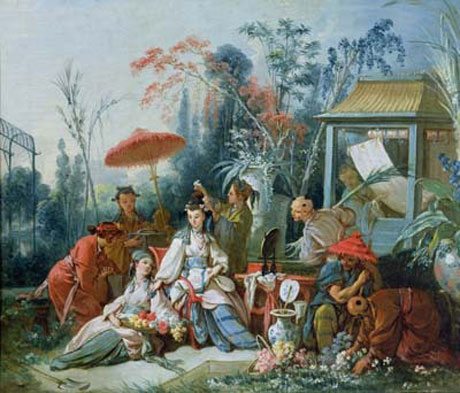 A beautiful Prussian blue vernis martin writing desk with Chinoiserie decoration was made for King Louis XV’s mistress Madame de Pompadour’s for her Chateau at Bellevue.

The artist she patronized Francis Boucher delighted in rendering designs for her, including a painting of the sophisticated pleasures of the beau monde who are depicted disported in a park as members of a pleasure seeking Parisian society. In England Thomas Chippendale and John Linnell both master craftsmen, were inspired by Chinese symbolism and motifs in the development of styles of chairs.

Chippendale’s mirrors in the Chinese taste were also highly sought after, their delightful whimsical decoration was delicate and had great charm. Chippendale Frame on Painted Mirror on Chinese Wallpaper at Saltram

Fabrics were imported from the East, satins and embroideries from India; painted silks from China were treated like wallpaper and lined an alcove. ‘

They were costly, but popular with those who could afford them.

Shops were filled with all sorts of delights for men and women of fashion to choose from as the style was taken up all over Europe. 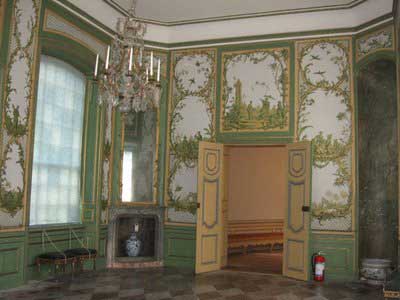 In the Green Salon at Drottingholm and in the Oranienbaum, the summer palace of the Czars of Russia Chinoiserie reigned supreme. Catherine the Great remodelled an enfilade of rooms so that her guests could stroll through a sequence of Chinoiserie interiors.

A love of things oriental fitted into both the French and English garden genres at this time. There is a Chinese Tent preserved at Boughton House, which is a unique example of a collapsible garden pavilion made of oilskin, produced in London in the mid eighteenth century.

It was also used in the garden of the London house of the Montague Douglas Scott family and can be seen in that place in a painting by Venetian artist Canaletto entitled View of the Thames. Surprise was the key to the success of Chinoiserie pavilions and follies.

On your journey your pulse would quicken as you came across some delightful building in which, unlike the house you lived in that had to conform to a conventional life style and its demands, you could allow your imagination to run free and create a total fantasy. The love affair with the exotic orient with its tales of a Forbidden City and exotic splendour provided a focus for tales of the fantastic. In an ancient Chinese Garden one of the most important characteristics to observe was the laying out of paths in curves and counter curves with circular moon gates. The Chinese House at Harristown in County Kildare in Ireland was built before 1738 for the garden at Stowe in Buckinghamshire.

It is one of the earliest such pavilions in Great Britain.

It was taken away in 1751 to Wooton House nearby until the 1950’s when it was taken across the Irish Sea to County Kildare. Chinese enameling on porcelain eventually became so desirable in 1870 the Royal Worcester factory brought to Britain a Chinese enameller called Po Hing to England so that he could complete an especially commissioned dinner service for them. Po Hing was Cantonese and painted the tableware in his native style.

Now and then a plate from this service turns up on the international antique market. They are a reminder of time when the east was still a mystery to many and confirmed the idea that it was not only exotic but also difficult to access. Unlike other styles that deteriorated to be replaced by another, Chinoiserie has never really left us. The western fascination for the east and its abiding images has endured although it continues to change to suit fashionable trends and politically correct poses.

These days it is more about a focus on food and the merriment enjoyed as it is shared in a mingling of the various traditions of a peaceful western multicultural society.

Plant hunter Robert Fortune recorded in his 1847 publication Wanderings in China ‘but the curtain, which had been drawn around the celestial country for ages, has now been rent asunder; and instead of viewing an enchanted fairyland, we find, after all, that China is just like other countries…’

For some were Ming
and others were Ch’ing
(Whatever those names may be)
And the food was divine
And the wine, the wine
Intoxicated me.

But alas for the end
Of dinner and friend
For he happened his eyes to raise
As I started to rub
The burning stub
On a bit of his finest glaze.

He was perfectly nice,
But as cold as ice,
As he rang for my coat and hat,
For Ming is a thing,
And so is Ch’ing,
That mustn’t be used for that.

This delightful poem signed S.D.C. was found on a scrap of paper in a book on second hand glass….

2040 director Damon Gameau has an inspiring vision to restore the broken balance between humans and nature focusing on pro-active solutions, fact based dreaming